We’re all going to have to be a lot more resilient in the future.

The “long emergency”, as James Howard Kunstler puts it, is now upon us.

If ever there was a wake-up call from Mother Nature, it’s been the weather events over the past 12 months.

Last year, the triplet Hurricanes Harvey, Maria, and Irma resulted in thousands of deaths (mainly in Puerto Rico) and tens of $billions in destruction.

This year has seen a rash of 120° F (50° C) summer days, droughts, current monster storms like Typhoon Mangkhut and Hurricane Florence — as well as numerous 100/500/1,000-year floods spread across the globe.

And that’s just so far.

It remains nearly impossible to connect climate change directly to any particular weather event. But taken together, it’s becoming increasingly difficult to dismiss the scientific claim that the quantity of heat trapped in the earth’s weather systems impacts the amount of water that now falls (or refuses to fall) from the sky and the high-temperature heat waves that now shatter records with such regularity that once-rare extreme conditions are now becoming routine.

Our “new normal” is quickly diverging from the natural conditions most of us have grown up with. Permafrost isn’t “permanent ” anymore — it melts. The Arctic now can be ice-free. In a growing number of regions in the US, you can leave a screenless window open on an August evening (with the lights on!), and remain unmolested by the swarms of insects that used to prowl the night.

All of these symptoms are connected by a root cause: our society’s relentless addiction to growth. And while we do our best here at PeakProsperity.com to continually raise awareness of this existential threat, the rest of the media completely ignores it.

Which is why the vast majority of people have no clue what’s actually happening. And a disturbing portion insist on remaining that way, being led around by the media, wasting their effort, focus and time on things on the irrelevant.

People are convinced that salvation lies with one political party or another, in the election of one candidate or the defeat of another, when the sad truth is all major political parties are on exactly the same side when it comes to promoting endless growth or waging war. In the US there’s simply no alternative political party at this point.

Yes, we’ve been beating this drum for a long time — over a decade now. But we persist beacuse this critical message is being blunted by very powerful forces that are mainly interested in preserving the status quo.

All the machinery of monetary, political, propagnda and military power is aligned in the quest to keep things headed in precisely the same direction they’re already going. Those who control the system today are personally benefitting too much, and so fight change with all their might.

That said, while the new religion embraced by society is Technology, I find it ironic that the very same scientific process that brings us wondrous innovations is simply ignored or dismissed out-of-hand when it return answers that run counter to our pursuit of endless economic growth and consumer comfort.

Here’s a recent report that does exactly that. It’s by scientists commissioned by the UN who took a look at things along the same line of thinking that we’ve outlined in the Crash Course. They conclude, as we did over ten years ago, that our unsustainable economic trajectory is almost out of runway.

But have you heard of this report before now? I highly doubt it. It’s not a message “they” want the masses to hear.

Capitalism as we know it is over. So suggests a new report commissioned by a group of scientists appointed by the UN secretary general. The main reason? We’re transitioning rapidly to a radically different global economy, due to our increasingly unsustainable exploitation of the planet’s environmental resources and the shift to less efficient energy sources.

Contrary to the way policymakers usually think about these problems these are not really separate crises at all.

These crises are part of the same fundamental transition. The new era is haracterized by inefficient fossil fuel production and escalating costs of climate change. Conventional capitalist economic thinking can no longer explain, predict or solve the workings of the global economy in this new age.

“We live in an era of turmoil and profound change in the energetic and material underpinnings of economies. The era of cheap energy is coming to an end,” says the paper.

Hallelujah! I really do hope these scientists get as much traction as possible with their message. But my experience tells me their warning will go unheeded.

And it’s not even a hard one to digest intellectually: Every organism can grow into its available energy supply, but no further.

A plant grown in dim light will not be as large or as healthy as one grown in full sunlight. The amount of sugar in a vat determines the maximum number of yeast cells produced. The abundance of fish in the waters surrounding a sea bird rookery will determine the fate of the nesting colony’s population.

Humans are no exception.

All of life is the study of energy flows and transformations. Where conventional economists have gone off the rails is in assuming there will always be sufficient inputs from the natural world to power the economy. That at a high enough price, there always be more of everything.

And in their defense, up until very recently, that has largely been true. But no longer.

Talk to any oil company operator and ask them how easy it is to find oil these days. Or ask a farmer how quickly crop yields would plummet if N-P-K inputs derived from fossil fuels were not added back each and every year to his topsoil. Or talk to a veteran cod fisherman about the 95% collapse in catch size over the past several decades.

Reality-based systems have limits. And we’re hitting them all over the planet.

Debt-based fiat money, like any monetary system, enforces some behaviors and punishes others.

Specifically, debt-based fiat money demands a regime of constant, perpetual growth. As any mathmatician will tell you, anything that grows contantly accumulates exponentially.

So each year, there’s exponentially more debt in the system than the year before. If not, our high-leveraged system begins collapsing, as threatened in 2008: 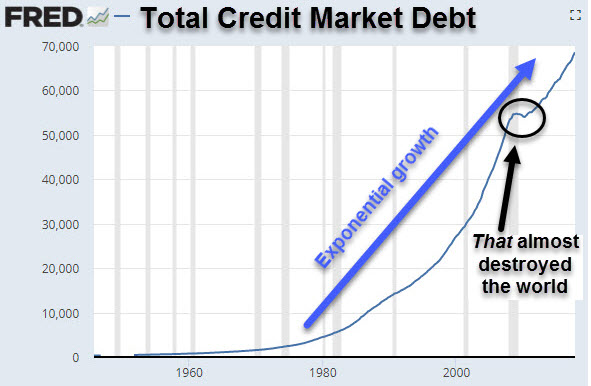 As long as you can have endless growth, the system of money we have in place today is perfectly fine. But if you can’t, then once growth peters out, the entire system crashes into nothingness. There’s no in-between territory.

We could choose to have a different monetary system. We could embrace a ‘sound money’ system, where money can’t be conjured out of thin air, at no cost, the way it is today. Instead, it’s in limited supply.

Under a sound money system, you either produce more than you consume or you face the consequences (rising interest rates, economic contraction, etc.). No ramping up the printing press to defer the reckoning off to a future date, which will also make it more intense when it eventually arrives.

Wars cannot be financed on the backs of future generations as yet unborn. Either you rally the populace to pay more in taxes to fund a military campaign, or you ramp down the war machine.

Sound money won’t fix everything. But it would be a great step in the right direction.

There are many other indictments against debt-based fiat money, including its proclivity to concentrate wealth into the hands of fewer and fewer winners, with everyone else in debt to that oligarchy (a process already well underway). Given these, busying ourselves with trying to refine our current monetary model is a waste of precious time.

As long as debt-based fiat money pins us between the harsh dichotomy of either growing exponentially or collapsing, there’s no amount of tweaking, (de)regulating, or rule modifying that’s going to make the slightest bit of difference.

We need a full-blown replacement.

You see, money is at the root of it all.

Every large, hierarchical assembly of people throughout history has had an organizing principle that kept everyone in line. Where once it was “royal blood” or “direct access to the god(s)”, today it’s money. That’s what keeps everyone in line and in their place. (Those interested in understanding this dynamic more deeply should read our foundational report on this topic)

But what happens when your organizing principle that keeps everyone in line marches them towards a cliff?

You need to either change it or perish. As the above article on the UN study continues:

Most observers, then, have no idea of the current biophysical realities – that the driving force of the transition to postcapitalism is the end of the age that made endless growth capitalism possible in the first place: the age of abundant, cheap energy.

And so we have moved into a new, unpredictable and unprecedented space in which the conventional economic toolbox has no answers. As slow economic growth simmers along, central banks have resorted to negative interest rates and buying up huge quantities of public debt to keep our economies rolling. But what happens after these measures are exhausted? Governments and bankers are running out of options.

Capitalist markets will not be capable of facilitating the required changes – governments will need to step up, and institutions will need to actively shape markets to fit the goals of human survival. Right now, the prospects for this look slim. But the new paper argues that either way, change is coming.

I too, will argue that — like it or not — change is on the way. However, I would go further than the authors adn note that any system, whatever its premise and however it’s run, will fail if it’s predicated upon an unsustainable idea.

And our system’s unsustainable idea is debt-based fiat money.

It’s flawed and it’s failing. Yet nobody in power can envision a solution because the answer cuts too deeply across our entire social, political and geopolitical constructions. Each is based on infinite growth and has enshrined power based on what we call “money”.

Changing the model is just too unpalatable to those who currently benefit most from the current system. Blinded by their spoils, they simply can’t realize that if/when the system breaks down, they’ll find mob justice offers an even worse outcome.

How To Move Forward

Help is NOT on the way. Not from our leaders, and quite frankly, not from ourselves. Too many people are not going to proactively reject society’s pursuit of growth and start embracing having less stuff in their lives.

Materially reducing carbon emissions into the atmosphere would require enormous hits to the economy, lost jobs and quite possible a reduction in total global population. Nobody in politics will go anywhere remotely near that conversation.

And yet the changes are coming. In many cases, they’re already here.