Let’s assume that you have doubts about ‘global warming’.

Some people do and, truthfully, we utterly lack the ability to accurately model how much warming will happen, where and by when (emphasis on accurately).

The reason is not for lack of trying or continual learning and model refinement, but centers on the complexity of the task.

All that can be calculated for certain is that a higher pile with steeper sides/areas (a.k.a. “fingers of instability”) is more likely to slump sooner and more catastrophically.

Now consider the tasks laid out before the global climate modelers where feedback loops abound, unknown variables still lurk, and the final result is the summation of multiple interacting complex systems. It’s not a pile of sand granules, it’s a gigantic interconnected system composed of heat flows, cloud formation, wind and oceanic patters and currents, variable solar and cosmic radiation, volcanoes and dust and jet trails and a thousand other inputs all interreacting with and influencing each other…in unpredictable ways.

It’s chaos theory (i.e. the butterfly effect) which means it’s way beyond anything we can currently model with any accuracy or confidence. However, the inability to model the exact nature and timing of the “slumps” and magnitudes (to draw from our sand pile analogy) does not detract from the observation that the “fingers of instability” are growing.

Because greenhouse gasses trap heat by preventing it from radiating out to space more heat is being retained within the system. We know that for sure and the science is very settled. CO2 is a prime greenhouse gas, although not the strongest, and it is accumulating at a very rapid pace: 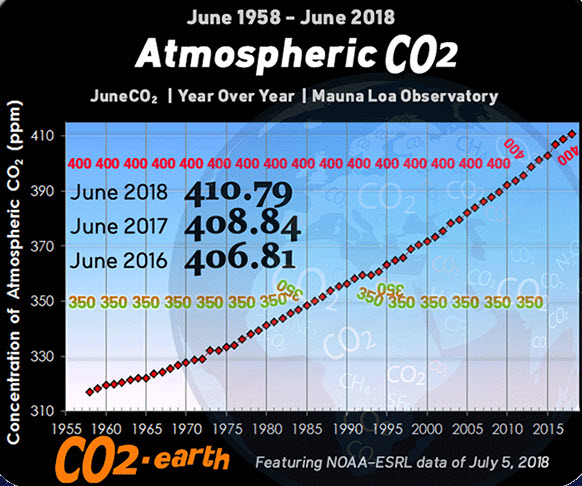 What happens next? We don’t know. If the system were linear we could simply measure the concentration of greenhouse gasses, factor in solar input (which varies over time), and then tell you how many degrees of warming and by when.

But the system is anything but linear.

What we don’t know is if the climate models have erred by overstating or understating the rate of global warming that will result. It could proceed faster than we think or slower, maybe a lot faster or a lot slower. Honestly, it could be either way. The range of uncertainty is huge.

The warming will also certainly not be evenly spread. Some places will warm up a lot and some will actually cool down, such as has been postulated for the UK and other parts of northern Europe if/when the Atlantic gulf stream conveyor belt slows down and slides to the briny depths, no longer delivering vast amounts of southern Atlantic heat to the north.

Atlantic ‘conveyor belt’ has slowed by 15% since mid-20th century

The Atlantic Ocean current that brings warm water up to Europe from the tropics has weakened by 15% since the middle of the last century, new research suggests.

Two studies, published in the journal Nature, use different approaches to show that the “Atlantic Meridional Overturning Circulation” (AMOC) is in a weaker state now than it has been for decades – and possibly even centuries.

The two studies differ on when and how they think the weakening was triggered. While one suggests it began in the mid-20th century as a response to human-caused climate change, the second proposes that it began a hundred years earlier following a natural shift in regional climate.

Despite the debate on when the weakening started, the studies agree that there has been a “continued decline in AMOC over the 20th century that may be attributed to recent global warming and melting of the Greenland ice sheet”, one author tells Carbon Brief.

The Atlantic Ocean plays host to a perpetual conveyor belt that transports heat from the equator up to the North Atlantic. The warm water that the AMOC carries northwards releases heat into the atmosphere, which means it plays a crucial role in keeping Western Europe warm. Without it, for example, winters in the UK would be around 5C colder. 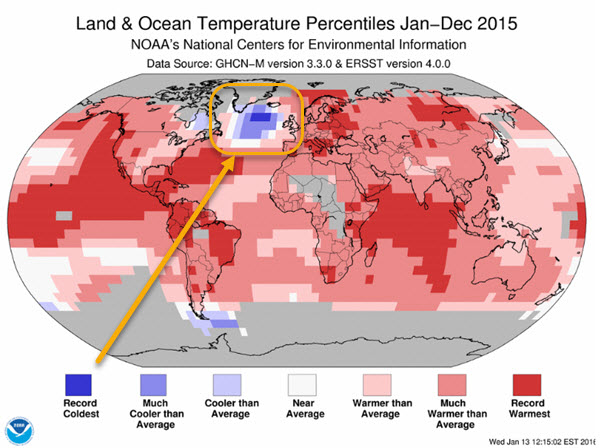 If that conveyor belt breaks down, the UK suddenly discovers that its winters have a lot more in common with Hudson Bay (its actual latitude) than Virginia Beach.

Some models have predictions that the jet stream will become unreliable, and wobble out of its normal patterns bringing unseasonable cold (as New England and much of Europe experienced this “spring” which almost didn’t seem to happen as we stayed in winter mode and then lurched suddenly into summer) and allowing extreme heatwaves to settle in.

Actually, that’s already happened and here in August of 2018 much of the northern hemisphere is locked in a vicious heat wave. Records are being broken daily, and often by a lot.

A building heat wave in Portugal and Spain threatens to topple national and all-time high temperature records in a continuation of a series of remarkable heat waves that have roasted the Northern Hemisphere this summer.

The big picture: The heat wave will be most intense in Portugal, Spain and parts of France, although the U.K. will also see above average temperatures for this time of year. In Spain and Portugal, the fire danger will climb to dangerous levels as temperatures soar, humidity levels plunge, and downslope winds increase.

A massive high-pressure ridge, with a clockwise circulation of air around it, will pump hot, dry air filled with dust from the Sahara Desert into the Iberian Peninsula through the weekend. Already on Thursday, the high temperature in Alvega, Portugal reached 44.6°C, or about 112°F, according to the U.K. Met Office.

By the numbers: The heat is expected to crank up in coming days, with computer models projecting astonishing high temperatures of at least 118°F to 122°F, or 50°C, in southwest Spain and Portugal during the next few days.

What’s happened here is that the usual steering jet stream pattern has gone missing which has allowed a persistent high pressure system to squat over Europe and funnel heat up from Africa for days on end.

The associated crop failures are astounding. Heat misery and deaths are climbing especially in places that are so unused to heat that they lack any appreciable numbers of airconditioned buildings in which to escape the heat.

‘Furnace Friday:’ Ill-Equipped for Heat, Britain Has a Meltdown

The monthlong heat wave has broken records, spawned wildfires in Wales and England, spurred delays in the transportation system and given birth to names like “Furnace Friday,” as Britons tried to find ways to describe this puzzling pain.

“Shops are out of fans, ice, sun cream, ice cream, and there’s a water shortage that has left our beautiful, lush parks all parched and yellow,” said Lucy Thornton, 36, an interior designer, as she walked into a west London cafe on Friday in search of cold water.

“We’re not equipped for this,” she added, “so it feels kind of apocalyptic.”

Unlike other European countries that are accustomed to coping with hot weather, Britain had what others saw as a meltdown because it generally lacks the infrastructure and resources to deal with the effects of long spells of high temperatures.

As far north as the arctic circle, above it actually, temperatures of over 32C (90F) have driven people and reindeer alike into the water. 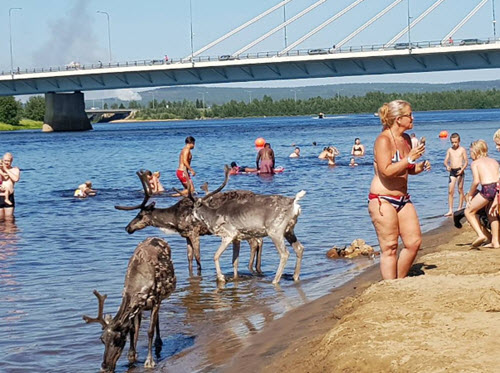 Records are being broken all over the place, smashed in some cases:

For the second year in a row, July in California’s Death Valley National Park snagged the award for the “hottest month ever.” Congratulations to this national treasure that is truly an unstoppable inferno.

Temperature records are being smashed which is an amazing feat because so many records were just broken last year.

2017 shattered various climate records, including the highest global temperature for a non-El Niño year, lowest Arctic sea ice extent, highest sea levels as well as greenhouse gas concentrations in the atmosphere, according to the American Meteorological Society’s 2017 State of the Climate report released on Aug. 1, 2018.

To add to this the Arctic sea ice extent is withering away under all of the intense arctic heat and may even break the all-time low set in 2012. I predicted this, rather casually and unscientifically, when I was freezing my butt off this winter. Each arctic cold snap was the loss of a gigantic blob of cold air from the arctic. That was like a resource it lost that came south and so I surmised that there would be less cold and more heat up there this summer. Ergo less ice. 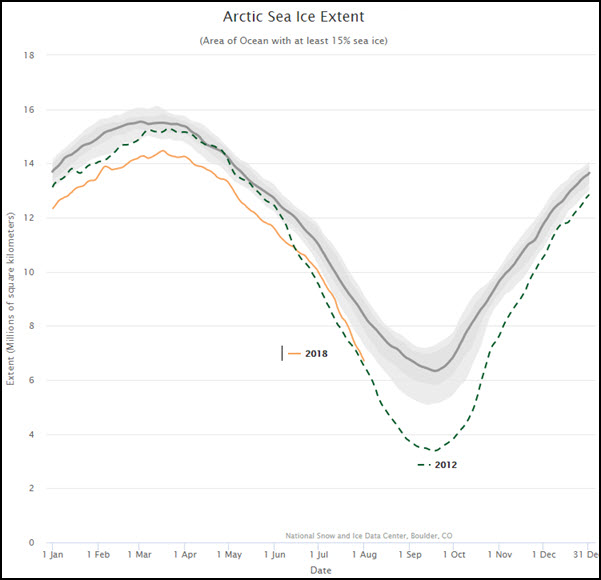 Maybe that’s a too-simplistic view of things, but the ice loss is very real at the moment and some are concerned that a “blue ocean” event is far closer than we think for the arctic. While the decrepit mainstream media nearly always wraps that idea up in the prospect of easier shipping or more oil and mineral exploration, what should really be at the center of our attention is the prospect of what will happen to weather patterns in the mid-latitudes due to the fact that blue oceans absorb and retain heat in far greater amounts than white ice.

While we don’t really know yet, the effects of all that new heat up north could be both quick and extreme, which you might say we’re already seeing in our abnormally harsh winters and brutal summers.

The question always emerges, what can we do?