A jury trial in California has resulted in a guilty verdict against the agrichemical and GMO giant, Monsanto, now Bayer/Monsanto. The judge has ordered Monsanto to pay damages of USD 289 Million to former school groundskeeper Dewayne Johnson, who has non-Hodgkin’s lymphoma. His lawyer argued it was caused by Monsanto’s glyphosate-based weed-killer Roundup. Not surprisingly Monsanto plans to appeal the verdict. The impact of the ruling, regardless the outcome of the appeal, will unleash worldwide consequences that spell huge problems for the entire GMO agrochemicals business model.

The Johnson trial, Dewayne Johnson v. Monsanto Co., CGC-16-550128, in California Superior Court in San Francisco,is the first of more than 5,000 such cases across the United States awaiting trial for claims that Roundup ingredients cause cancer.

Johnson, age 46, is a former pest control manager for a California county school system, where he applied Roundup and Monsanto’s Ranger Pro on school grounds across the county up to 30 times per year for more than two and a half years.

According to the magazine Insurance Journal, the guilty verdict could influence the outcome of thousands of similar cases against Monsanto glyphosate-based Roundup. Notably, the same law firm, California-based Baum, Hedlund, Aristei & Goldman, PC is involved as part of the legal team in many of the other cases awaiting trial.

Robert Kennedy Jr, co-counsel in the case against Monsanto wrote a summary of the court cross-examinations by plaintiff lawyers as well as Monsanto lawyers. It revealed a devastating pattern of Monsanto suppression of negative carcinogenic test results, lies and huge payments to their “expert” scientific witnesses to support unproven Monsanto safety claims that Monsanto’s Roundup herbicide was allegedly no carcinogen.

In one of the more damning admissions, Monsanto toxicologist, Donna Farmer, was forced to admit, when confronted with an internal Monsanto e-mail, that her primary concern was regulatory compliance rather than public health. Farmer was also forced to admit that she orchestrated the ghostwriting of articles for supposedly independent scientists who agreed to defend glyphosate. Her reply: “There’s nothing wrong with that…”

Another paid Monsanto witness, Dr. Warren Foster, was forced to admit he had never done study of glyphosate or its carcinogenity before Monsanto paid him to testify against the animal studies used by the International Agency for Research on Cancer (IARC), a WHO agency, which determined glyphosate a “probable carcinogen” in 2015. The IARC ruling was a major blow against Monsanto’s claims that its Roundup, with some 31% glyphosate, was not harmful to animals or humans.

Another Monsanto toxicologist, Dr. Mark Martens, was asked why Monsanto dropped research by an independent toxicologist, Dr. James Parry, in 1999, after praising him as a top expert. When Parry’s research concluded that the complex and non-disclosed formulation of Roundup could cause genetic mutations, a potential cancer precursor, Monsanto dropped him and refused to let independent scientists review Parry’s studies, nor did Monsanto give the Parry studies to the US Environmental Protection Agency (EPA). Another Monsanto “expert witness,” Dr. Lorelei Mucci, a cancer epidemiologist and associate professor at the Harvard School of Public Health (HSPH), admitted that Monsanto paid her $100,000 for her testimony.

When Monsanto attorneys attempted to discredit toxicology expert, Dr. Christopher Portier, by confronting Portier with the statement that the EPA had concluded, contrary to the IARC, that glyphosate was “not likely” carcinogenic to humans, Portier, under oath, declared that both the EPA in the USA and the EU’s European Food Safety Authority (EFSA) missed 15 tumors in various rodent studies on glyphosate because the agency used the wrong methodology. He said:“My entire career been about using scientific evidence to make decisions, primarily about the carcinogenicity of compounds, and we’ve worked for years and years to do that appropriately. This was just so amazingly wrong in the way they were doing it.”

In testimony from Dr Charles Benbrook, the point was made that the insistence of the EPA to only discuss glyphosate, separate from the adjuvants or surfactants added to glyphosate to compose Roundup, was a fraud designed to cover up the more pressing question of, “whether the Roundup formulation itself, not just a single ingredient, is toxic and carcinogenic.”

In sum, what came out in the trial in San Francisco was a documented pattern of lies, coverup, a secret war to discredit independent toxicologists whose researches contradicted Monsanto safety claims for Roundup.

In a peer-reviewed scientific paper published on February 26, 2016 in the International Journal of Environmental Research and Public Health, a team of toxicologists led by Gilles-Eric Séralini of the Institute of Biology, University of Caen in France and AndrásSzékács, Director of the Agro-Environmental Research Institute of Hungary’s National Agricultural Research and Innovation Centre, tested the most commonly used glyphosate-based herbicides including Monsanto Roundup. They tested the complete cocktail, including the co-formulants and formulations used in combination with glyphosate.

Their tests concluded among other things that the compounded herbicides using glyphosate as base, but including undisclosed “formulations” or surfactants, were vastly more toxic than glyphosate when tested alone, up to 2000 times more toxic to cells than glyphosate alone.Monsanto has never revealed its trade secret co-formulants, neither to the US Government as it is compelled to by law, nor to the public. 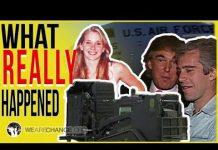 Huge Clash Coming In Virginia? Trump’s Legal Team Did WHAT?!?!