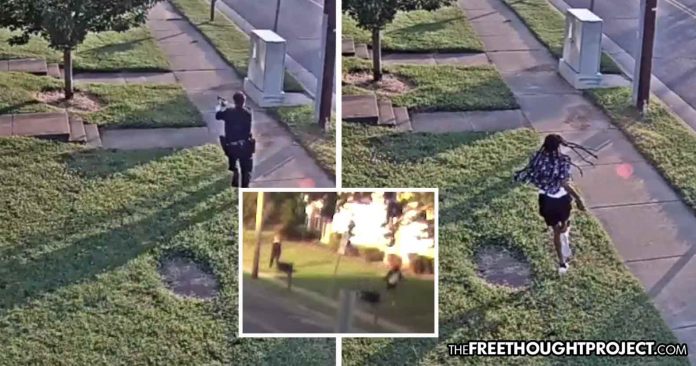 Graphic video footage was just released showing a police officer execute a fleeing man by shooting him in the back as he ran away.

Nashville, TN — A disturbing trend seems to be happening among police in America in which they are shooting people in the back as they run away. The latest victim to be publicly executed for running from police is 25-year-old Daniel Hambrick of Nashville. His execution by officer Andrew Delke was caught on a graphic video.

Hambrick was shot and killed during a traffic stop in North Nashville on July 26. Nashville Mayor David Briley called for the release of the graphic video on Wednesday to ensure the “transparency of the investigation.”

“We all want to know what happened on the 26th of July,” Briley said. “This video will shed some light on those circumstances but it won’t certainly be the last information that our community receives.”

According to police, Hambrick was killed after police stopped a car they believed was seen ‘driving erratically’. When officers pulled the car over, Hambrick got out and fled on foot, holding what was described as a “dark object” in his hand.

As the graphic video shows, never once does Hambrick attempt to harm officer Delke. In fact, he only looks back once before continuing to run.

When Hambrick rounds a corner, the camera angle shows Delke pursuing him and when we look closely at the video, it appears that there is a dark object in his hand. However, it is unclear what the object is.

As the two run past a tree, Delke opens fire on the fleeing man and he drops dead on the grass.

As WSMV reports, TBI spokesman Josh DeVine said investigators believe Hambrick was carrying some kind of dark object, but it is unclear from the video if it was a gun.

A gun was found at the scene of the shooting, but it is unclear if it was Hambrick’s weapon, according to DeVine.

The video was so graphic that three Metro officers contacted WSMV to let them know that it does not show enough evidence to justify Delke killing Hambrick.

The three officers spoke on the condition of anonymity to WSMV and noted that the video does not show Hambrick demonstrating any threat to the officer or to people nearby.

Naturally, the police union is already expressing their anger with the release of the video, attacking it as “low resolution” from a “different block,” noting that it “tells us what we already know.”

“To release it without any narrative or context, causes confusion in the community and the potential for further division between law enforcement and the people we serve and invites people to draw their own conclusions without any facts,” James Smallwood, a representative for the Fraternal Order of Police said.