For now, let’s ignore the fact that Franklin Graham’s father was a multi-generational Luciferian, 33 degree Freemason, who drugged and raped me at Bohemian Grove when I was a kid. And let’s put aside that Billy Graham raped Kathy Sullivan who went public about this years ago. And let’s shelve the fact that Billy Graham promoted Catholicism and other non-protestant concepts. And we’ll just forget about UK pop star Cliff Richards being charged with pedophilia for allegedly raping a child at a Billy Graham Crusade. Let’s just forget ALL of that completely irrelevant material for a minute – and just take a look at the doughnuts:

I have no problem associating with and supporting gay folks – but I’m not sure whether Billy Graham’s disciples, who defend him like he was Jesus incarnate instead of the satanic monster he was, might agree.

If the Voodoo Doughnut menu is not inappropriate enough for Billy Graham’s worshippers, let’s take a look at the restaurant sign that Franklin Graham (son of the Luciferian pedo who raped me when I was 6 – but that’s totally irrelevant) posed in front of:

The name ‘Voodoo Doughnut’ itself is kinda anti-Christian. Christians are traditionally against voodoo, witchcraft, and evil stuff. At best, it certainly seems odd to me that such a high profile protestant figure would boast on social media that he dined at venue named ‘Voodoo’ which sold doughnuts named after sexual acts and satanism – things protestant ministers are supposed to publicly oppose, right?

Then there’s the obvious FBI pedophile triangle symbol located in the middle of the Voodoo sign. That’s not cool. But then, maybe Frank hasn’t done his conspiracy homework… So, let’s help him out, coz I’m sure his PR team will be reading this article, as part of their damage control strategy.

“The Magic is in the Hole.” Frank, this is a double entendre. It refers to the Luciferian tradition of employing sodomy as a means of accessing spiritual power. Your dad knew all about that.

“Good things come in pink boxes.” Frank, this is another double entendre. It’s pedo speak for: “It’s good for pedophiles to ejaculate inside a little girl’s vagina.”

And ouija boards are very Christian. 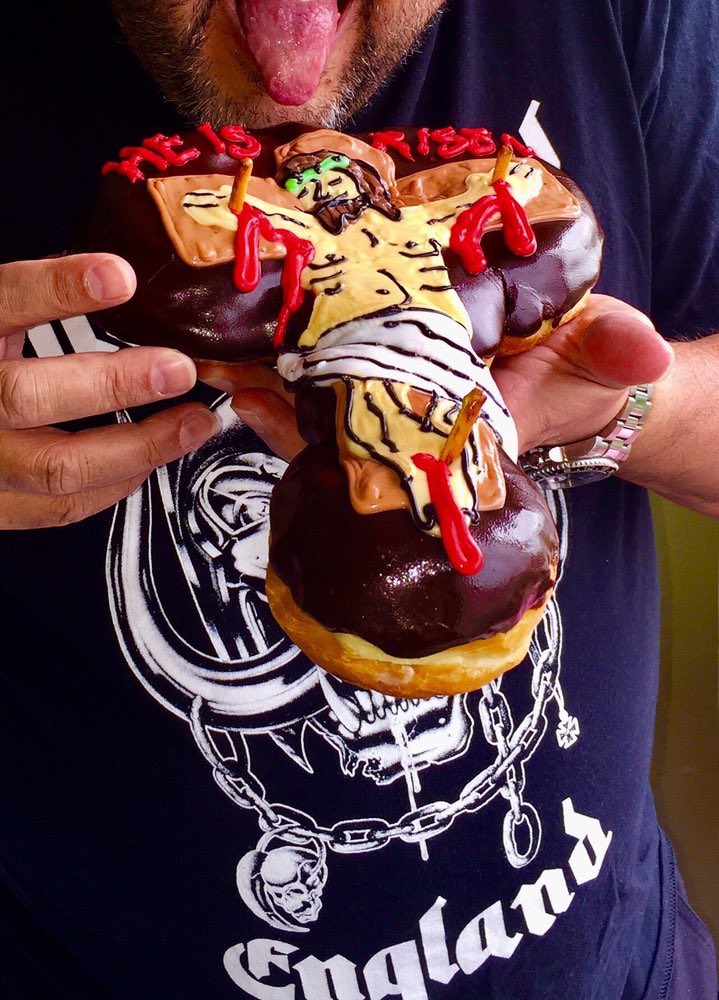 Someone on Frank’s team realised his Voodoo Doughnut posts were inappropriate, because they were immediately deleted after I tweeted at Franklin Graham and subtly raised awareness:

Yep, I was a tad emotional…

But so were many of the 11,700 twitter followers that I had accrued in a few days. The public responded with discontent. Even the non-Christians demonstrated a basic understanding that it is inappropriate for a protestant Christian leader to dine at such a place.

Some even took Franklin Graham’s “killer doughnuts” comment as a threat, considering the timing of his posts, and the fact his father was a child raping kiddie killing Luciferian. But I digress…

Yeah, I don’t know whether Franklin Graham knew that he was dining at a Luciferian pedophile doughnut cafe which sold doughnuts in the shape of penises and pentagrams – or whether this was all just one big PR cock-up.

There’s one way to find out. Franklin Graham can respond to his father’s child rape victims. That would dispel all doubt, and convince me that that his visit to the Voodoo Doughnut Portland store that the FBI raided in 2016 for it’s part in child sex trafficking, was just a BIG coincidence…