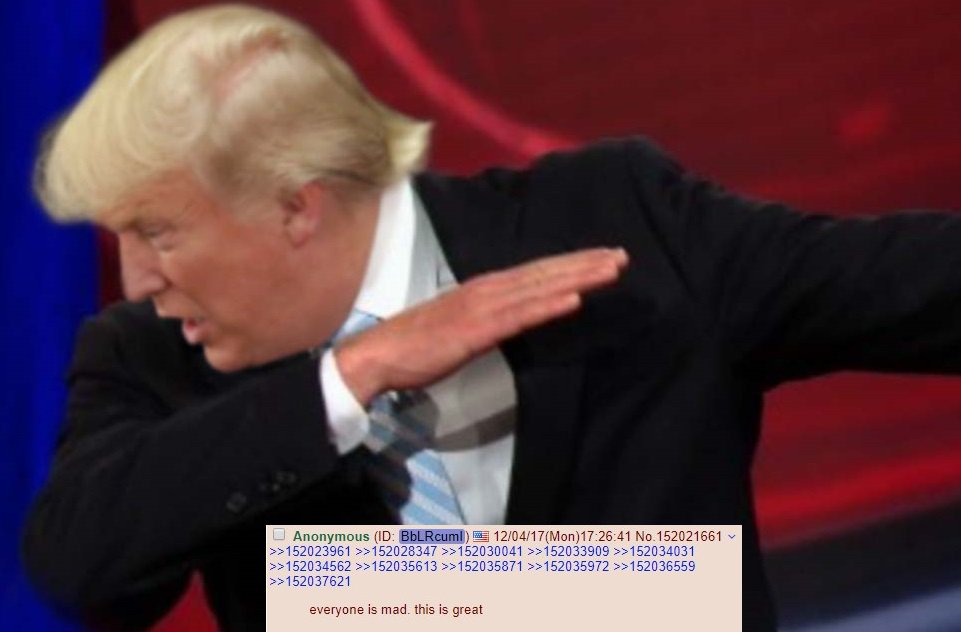 And did he listen to me?

Does it even matter that if I ever reproduce, my offspring will have deformed, peanut-shaped heads that make them look like something out of a Salvador Dali painting, by virtue of the jostling my undercarriage took on this day??

Q, DO YOU KNOW HOW HARD IT IS TO TAKE SCREENSHOTS ON A TRACKPAD??

All joking aside, my vacation has been wonderful so far, and temporary exaggerated soreness aside, I’m really enjoying my time here, and I’m glad #QAnon posted again.

So enough jibber-jabber. Let’s get into it, starting by first indexing those posts Q dropped one-by-one a few days ago before getting into the new stuff. Don’t worry, we’ll move quickly: 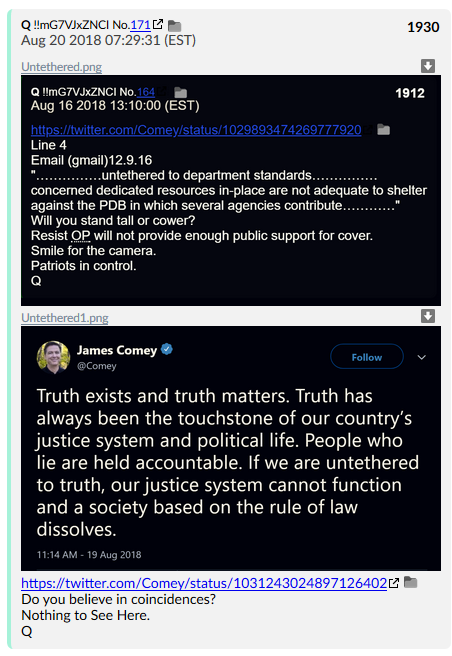 BOOM! Comey is a scumbag and we have everything!

READ IT! Nothing for me to explain here.

Q is referring to this post and says McCain’s “death” happened precisely 30 days after it was posted, on August 25th. 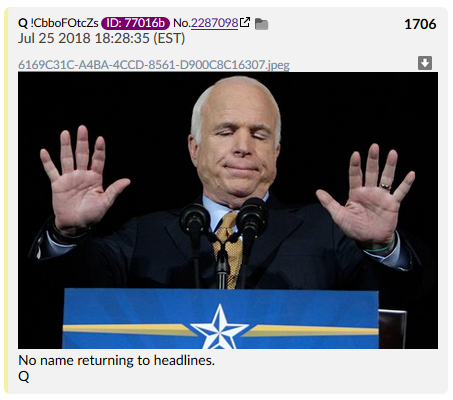 Dancing crabs from my previous post aside (fun as they may be), I’m leaning more towards McCain being in GITMO right now, than actually being dead (from suicide or otherwise).

Big article. I read it, and advise you to, too – but it’s basically about Stefan Halper and the whole timeline, documenting his role in manufacturing the whole “Russian Collusion” narrative.

#Anon had some interesting thoughts on the subject: 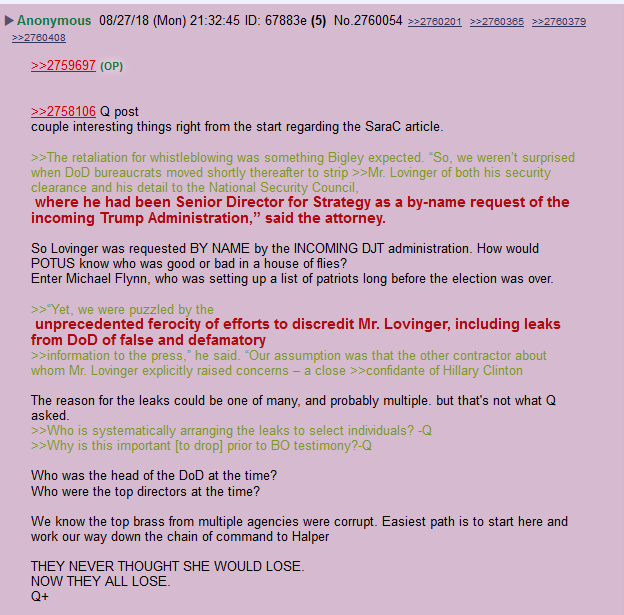 And these #Anons arrive at the conclusion that they’re setting a perjury trap for Bruce Ohr’s upcoming testimony: 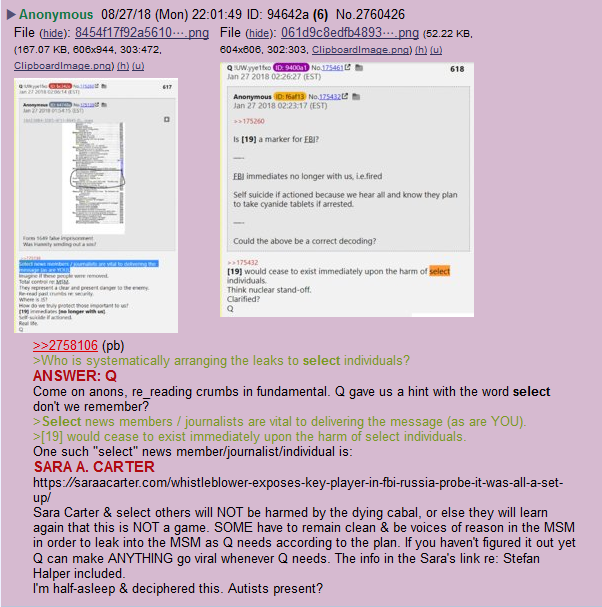 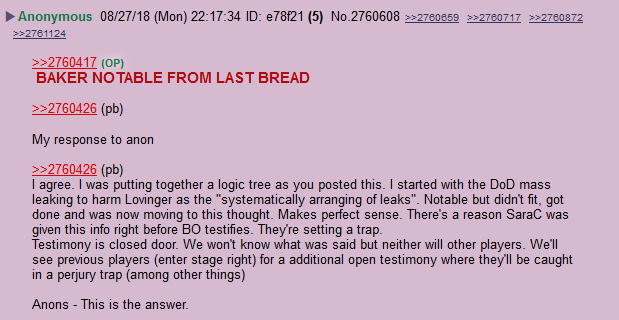 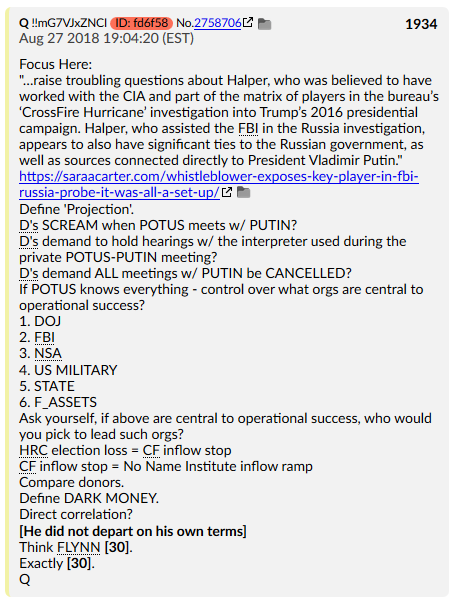 So McCain tried to keep the “dark money” flowing when the Clinton Foundation was cut off:

And in direct contradiction to Cindy McCain’s tweet, Q tells us he did not “depart” on his own terms.

There’s a lot of debate as to whether that means McCain is dead or not – and I know I’ve been all-over-the-map with this, but tonight Q specifically said “depart.”

That, of course, can be read as “died” but the deliberately vague nature of the verb could easily be understood as departing for GITMO. I’m of the opinion that if Q wanted us to know he was dead, he’d just say it.

Now, Anon here definitely lands on the “dead” side of the argument, but the important takeaway is the timeline:

And while the [30] day timer applied to NoName, I’ll fully admit here that I don’t understand the Flynn [30] bit here. Q originally said Flynn would be done in 30 alllllllll the way back on April 27th.

Well, May 27th came and went, and my hopes were dashed once more for a speedy resolution to all this.

No explanation I’ve read anywhere has been satisfying regarding this point. It all reads like a lot of handwaving. Q did once say that “timetables shift,” but that sounds like a lame excuse in this case, frankly.

If anyone figures this particular point out – in a satisfying and straightforward manner (that isn’t just kicking the can down the road to September 20th or whatever arbitrary date someone chooses) – I’ll post about it, but right now, this point is as clear as mud.

Flynn is still in legal purgatory.

Guys… did Flynn just preside over an early Tribunal for NoName???

Stick with me here:

I don’t have the legal knowledge to know if such a thing is even possible, and while I tried to dive in to the current courts-martial manual (note: not the revised version Trump EO’d into effect for Jan 1st, 2019)… it’s over 900 pages of legalese, and frankly… I’m on vacation.

30 days might mean 30 days of reviewing evidence. That puts us at May.

The trial starts, unbeknownst to the world.

NoName is convicted in July, almost 60 days later, when he “surrenders” as per the Q pic with his hands up.

A trial like that would certainly explain #NoName being MIA for extended periods of time during these months, and making his final preparations.

But Gen. Flynn keeps strategically changing his twitter headers as subtle signals to us, having gone through a series of waves (watch the water) and the most recent being:

Operating off this theory, my biggest question would then be this: given Flynn’s current legal status, is there anything preventing him from being approved to oversee a military tribunal?

And secondly: if this was an early tribunal, was this case just “special” in that Trump and Q were confident enough they could lock McCain away without needing the revised tribunal manual?

Maybe that’s far-fetched, but again, I see no other reasonable explanation for Q’s previous posts, and all I’m tying to do is expand my thinking. 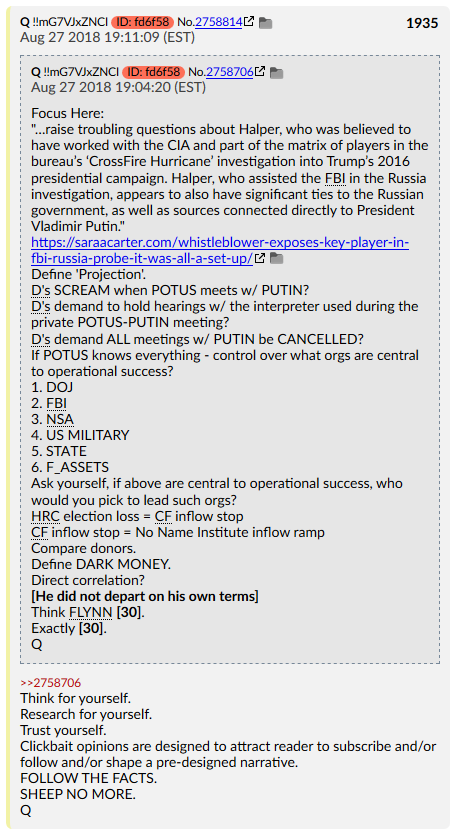 Well, you don’t need me to explain that.

As for me, I’ve only ever claimed to be an anon trying to follow Q, trying to package up a lot of information for folks who may not have the time in their lives to spend hours upon hours on the boards, piecing together crumbs for themselves – or for those who just find Q hard to follow (which, admittedly – he is). I try to keep it succinct, understandable, digestible, and engaging – while explaining where my current thought processes have lead me, and admitting/course-correcting when I’ve got it wrong.

Think about it: if you’re someone with a family, someone with a job or two jobs – you’re just not going to be able to keep up with the fire-hydrant of info that gets blasted at you every day, let alone Q’s encoded posts.

My advantage is that I can keep up with that fire-hydrant, and whatever strange communicative ability I have, whatever unique and specific skill stack I have, I’m able to distill it all down into something pretty much anyone could read, and blast it out across the internet at fiber-optic speed.

And while I’m grateful for all my readers, and excited that so many others are as excited about Q as I am, the truth is I’d still be doing this even if I didn’t have any readers. Heck, that was the scenario for a time. I had lost 10,000 readers on Facebook due to my page getting deleted, and I had to start over from nothing. These days, the site has well above 20,000 subscribed readers (be it through Gab, through push notifications, or other channels).

Point is: I’ve been here since the beginning of this movement. I plan on staying through until the end – and I will always point people directly back to Q.

I hope Q  doesn’t consider me clickbait (despite my sometimes stylized offerings). I’m really just trying to help and present where I’m at in my thought process. I think most people “get” that – especially if they’ve been around for a while, but idk, I just wanted to say that after reading this Qpost.

And let’s face it, Q. Sometimes your drops need a bit of help, a bit of a spark, a bit of pizzazz). I’m the publicist you never asked for, the Del Griffith to your Neal Page.

If you don’t love me now, you’ll learn to love me in time, Q.

(Spoilers, btw –  in case you haven’t seen this 3o+ year old classic for whatever reason):

Reminder for #TheCabal. McCain couldn’t weasel his way out and now we’re comin’ for you! 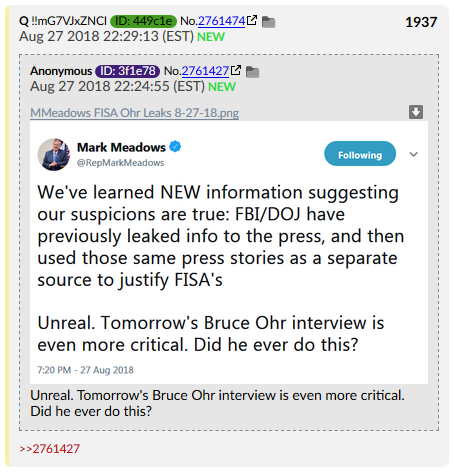 See the perjury trap explanation above, for more context.

An FBI special agent told Congress earlier in August that the bureau has used leaked news stories as justifications to obtain surveillance warrants against American citizens, a source familiar with the testimony tells The Daily Caller News Foundation.

Basically the equivalent of planting evidence at the scene of a crime.

Hmmmm…. Wonder if ole Brucie is guilty of such a thing??

Convenient how now he can’t escape without perjuring himself during his testimony.

Q gives us the real flowchart of information here, and then shows us the media’s “narrative shifting” tactic: 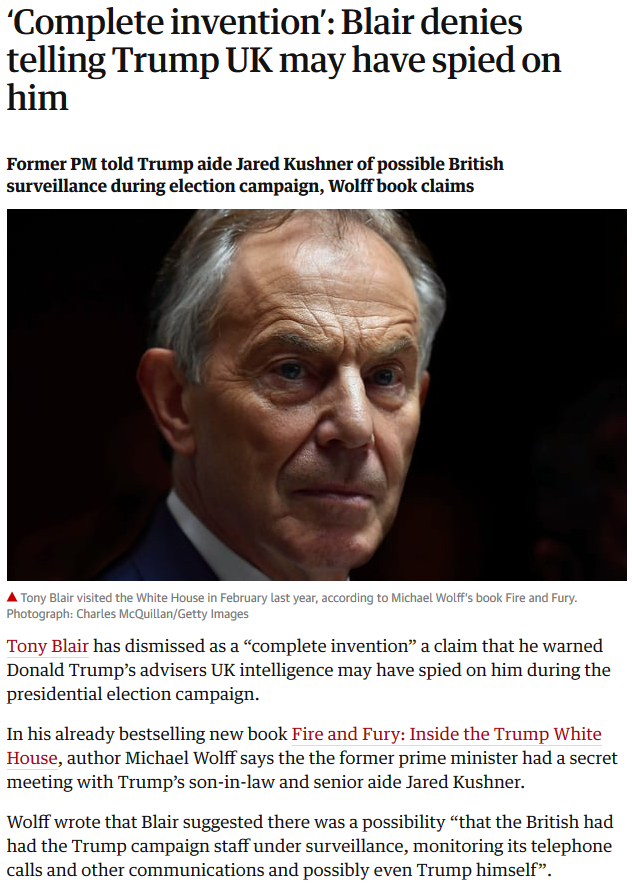 I only have one thing to say to Blair:

And don’t discount Australia’s relevance in all this. Remember, Aussie PM Malcolm Turnbull just completely nope’d right out of office, unannounced, a few days ago.

Bruce Ohr leads back to HRC and Obama. He did what he did at their request.

And the firewalls they talked about?

Anon has an interesting theory on those:

Makes a lot of sense, if you ask me. 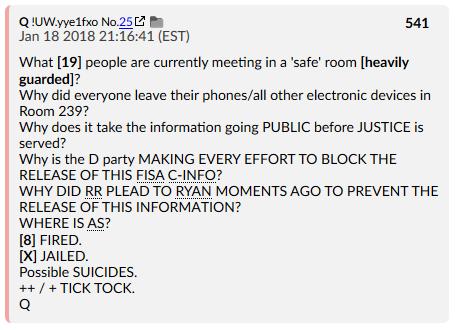 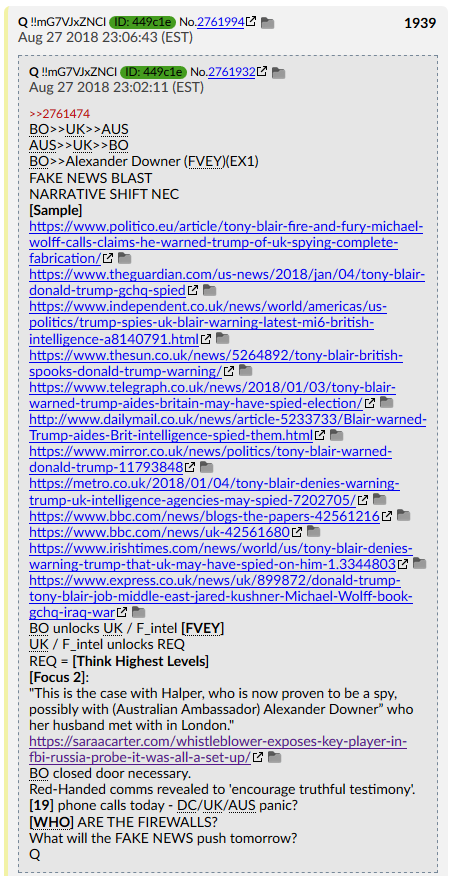 More on Halper and Downer, here:

And that image at the end… Another hint at Tribunals for those [19]?

When I wrote out that theory above – about Flynn – Q hadn’t posted this yet.

Seeing it now at the end only helps bolster the theory, in my mind.

No deals! No one’s escaping this! And like I said on Gab the other day, we ARE winning!

If we weren’t, traitorous old NoName would still be lingering around, causing trouble. That alone is telling in and of itself. You wanted stuff to start happening. Well brother, it already is.

Alright, back to the vacay for me!