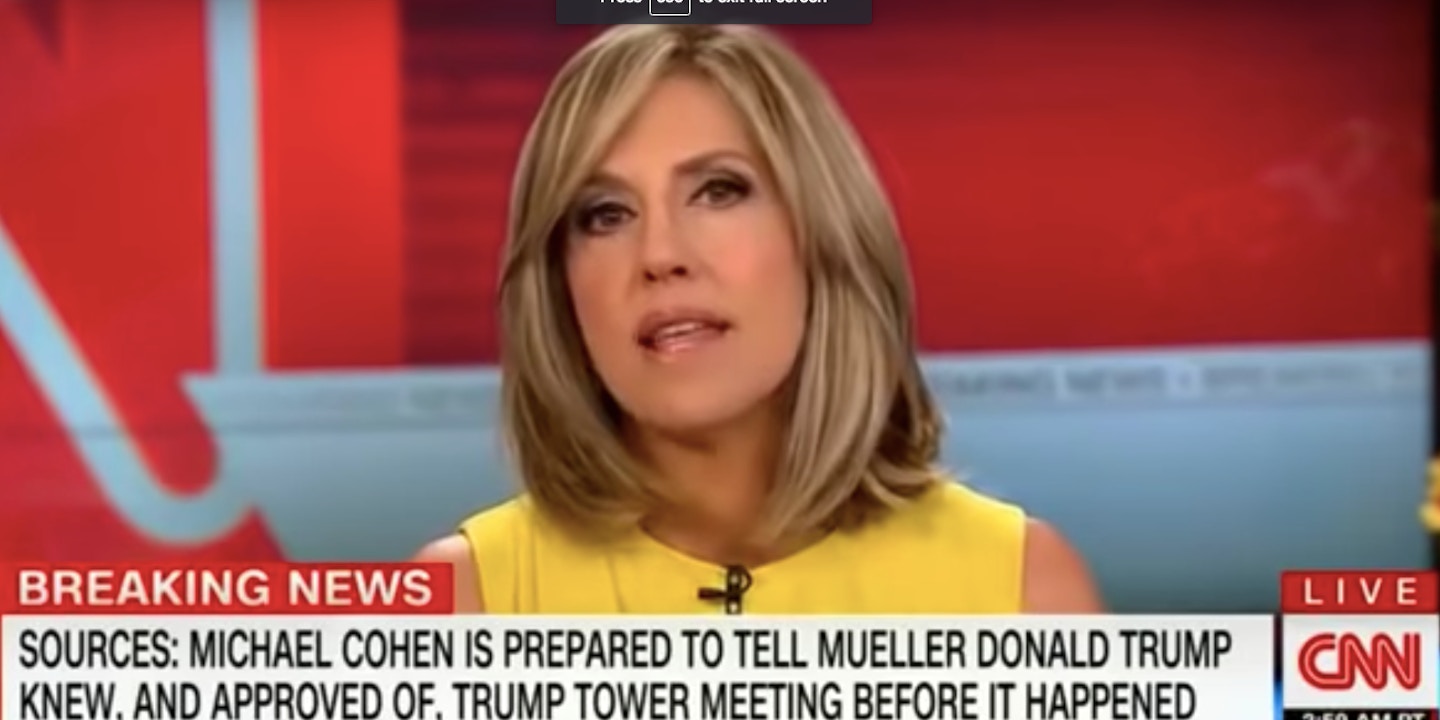 CNN’S BLOCKBUSTER July 26 story – that Michael Cohen intended to tell Special Counsel Robert Mueller that he was present when Donald Trump was told in advance about his son’s Trump Tower meeting with various Russians – includes a key statement about its sourcing that credible reporting now suggests was designed to have misled its audience. Yet CNN simply refuses to address the serious ethical and journalistic questions raised about its conduct.

The substance of the CNN story itself regarding Cohen – which made headline news all over all the world and which CNN hyped as a “bombshell” – has now been retracted by other news outlets that originally purported to “confirm” CNN’s story. That’s because the anonymous source for this confirmation, Cohen lawyer Lanny Davis, now admits that, in essence, his “confirmation” was false. As a result, both the Washington Post and the NY Post outed Davis as their anonymous source and then effectively retracted their stories “confirming” parts of CNN’s report.

CNN, however, has retracted nothing. All inquiries to the network are directed to a corporate spokesperson, who simply says: “We stand by our story, and are confident in our reporting of it.” A newsletter sent Sunday night from CNN’s two media reporters, Brian Stelter and Oliver Darcy, contained the same corporate language, but addressed none of the questions raised about CNN’s report.

It’s certainly possible that CNN had other sources for this story besides Davis, who now repudiates it. It’s hard to see how CNN’s story could be true given that Davis, Cohen’s own lawyer, explicitly says that Cohen has no information that Trump had prior knowledge of the Trump Tower meeting, that Cohen cannot and will not tell Mueller that this happened, and that Davis’ prior claims about Cohen’s knowledge and intentions are false.

Axios reported that Cohen testified under oath to Congress that he has no knowledge that Trump had prior knowledge of the meeting and repeated this to leaders of the Senate Intelligence Committee again after CNN’s report. Davis now says Cohen – rather than intending to tell Mueller he has such information – stands by his long-time claim that he has none. So the key people with knowledge on what CNN reported – Cohen and his own lawyer – insist that CNN’s reporting about what Cohen knows and intends to tell Mueller is false.

Nonetheless, it’s possible that other sources did tell CNN that Cohen does have this information and intends to share it with Mueller, and that Cohen’s own lawyer is either unaware of this or is lying about it. It’s not likely, obviously, but it’s theoretically possible. Unfortunately, CNN refuses to tell us anything about what it itself said was a “blockbuster” story, so it’s impossible to know.

But there’s an entirely separate, and more significant, question about CNN’s behavior here; namely, the very specific claim they made about their sourcing for that blockbuster story. Last night, BuzzFeed reported that Davis explicitly confessed that he was one of the anonymous sources for CNN’s July 26 story, just as he was for the stories from the Washington Post and the New York Post. Last week, CNN put Davis on the air with Anderson Cooper to deny that he was the source for that CNN story – a denial Cooper did not contest – but Davis now admits he was one of CNN’s sources, if not their main source.

Yet remarkably, CNN, in its July 26 story, specificaly claimed that Davis refused to talk to CNN about the story or provide any comment whatsoever:

Only one of two things can be true here, and either is extremely significant: (1) CNN deliberately lied to its audience about Davis refusing to comment on the story when, in fact, Davis was one of the anonymous sources on which the CNN report depended, and CNN claimed Davis refused to comment in order to hide Davis’ identity as one of their anonymous sources; or (2) Davis is lying now to BuzzFeed when he confessed to having been one of CNN’s sources for the story.

How can CNN possibly justify refusing to address these questions, and refrain from informing the public about these critical matters on a story that they themselves hyped for days as a “blockbuster,” one of the most significant stories yet in the Trump/Russia saga? Questions about this massive discrepancy from the Intercept to Stelter have not been answered, nor has CNN addressed this on air or with any other media outlets who have inquired. Darcy told the Intercept he was not aware of sourcing issues on the story and suggested inquiries be directed to CNN’s Public Relations department.

If CNN lied about Davis having refused comment (when, in fact, he was one of their anonymous sources), then this is obviously a major journalism scandal. If, by contrast, Davis – who has been treated by the U.S. media as a reliable source despite decades of lying (and who leveraged that treatment to raise more than $150,000 in a GoFundMe “Truth Fund” campaign for Cohen to pay Davis) – is lying about having spoken to CNN about the July 26 report, that is also a major story.

Yet CNN, the only ones with the ability to inform the public about what happened here, is silent. This despite the incomparable importance which CNN breathlessly told its viewers the story carried:

Media outlets have invented a deceitful term to discredit and trivialize any reporting on their own wrongful conduct. Such reporting, they say, is nothing more than “media criticism,” in contrast to the “real reporting” they do. A New Yorker profile published yesterday that was designed to malign my own work on this story over the last two years – which has involved ample reporting on the conduct of media outlets in circulating false information – invoked this term of insult to dismiss such reporting as worthless.

This term is self-serving nonsense from media outlets, seeking to render their own behavior off-limits from journalistic scrutiny. Media outlets such as CNN and MSNBC are highly powerful corporate actors. Their behavior can generate immense consequences for society. When they engage in journalistically deceitful or unethical practices, or when they report consequential claims that end up being false as a result of their recklessness or bias, that produces highly harmful outcomes.

Examples of what does actually merit the diminishing term “media criticism” are columns expressing one’s opinions about the on-camera charisma of various TV hosts, or whether new website designs are aesthetic improvements. But documenting false claims from powerful corporate media outlets or describing their wrongful behavior helps the public understand what is and isn’t true regarding key political controversies: the very definition of “real reporting.” Such reporting is vital for dispelling propaganda and deceit. It is clarifying on the most vital issues.