Manafort’s always been a huge question mark to me.

But there’s a huge question as to whether Trump knew he was a plant and got him to flip. 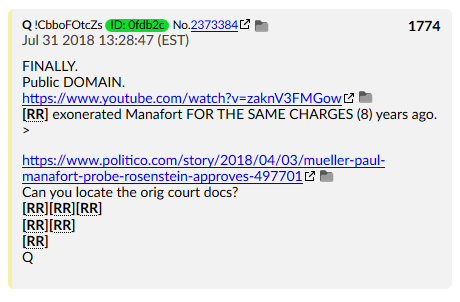 He’s been locked in solitary for so long now, but the distinguishing factor is… he hasn’t said a peep. Against Trump or otherwise.

So Manafort’s lawyers want to bring RR up to testify first, which is a hilarious plot twist. Like the Judge says, you could sell pay-per-view tickets for this.

You have to sit up and wonder, “What’s RR gonna say?” 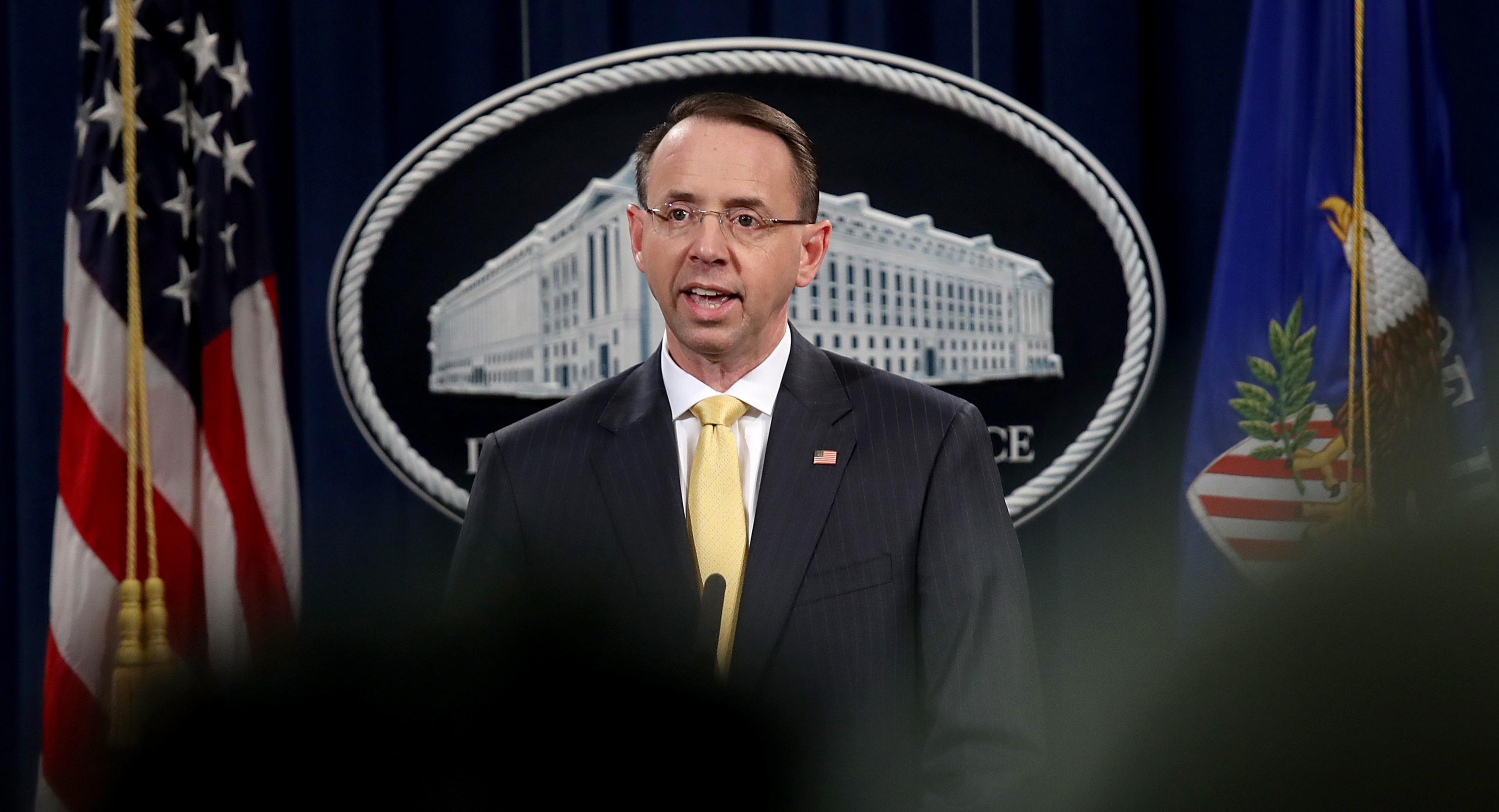 The new disclosures come in response to a motion Manafort’s lawyers filed asking to have the criminal charges pending against him thrown out.

You could argue that it’s malicious prosecution on RR’s part, but that would just end up making Rosenstein look really stupid, with the case ending in simple Double Jeopardy. Do you really think he’s forgotten what he did for Manafort just 10 years ago?

But what if RR was acting on Trump’s orders. What if he’s doing this as a way to get his testimony entered as evidence in the public record, and to ultimately get this to lead back to the Podestas?

You have to remember, the Podestas don’t have immunity for this case.

The five individuals who have immunity right now are:

So I’m going to reiterate my Mueller/RR whitehat theory from before and refer you back to this older Qdrop: 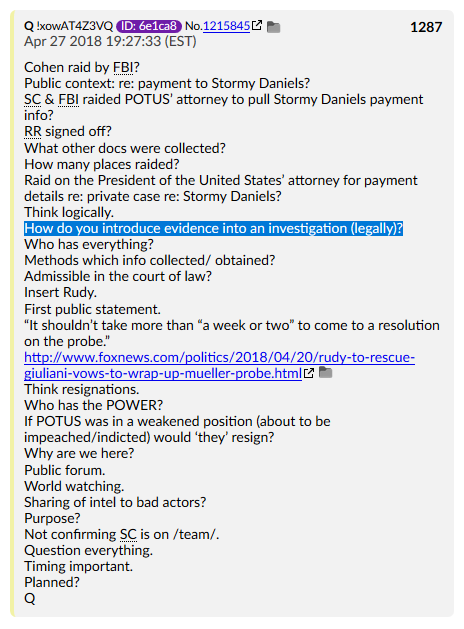 I know you want to hate him. I know you do. But all this time, I’m just not seeing the logic behind that.

If RR talks (and yes, it remains to be seen what he’ll actually say), but if RR talks – this could spell the real beginning of the end of the Russian Collusion narrative.

Of course, he’d have to step down after that. There’s no way he could be seen as unbiased after his testimony, so he’d just have to…

The bonus to that is Trump can appear completely uninvolved. RR would be stepping down of his own volition; not getting fired by Trump.

Which is why I think Q gives us the RR countdown. 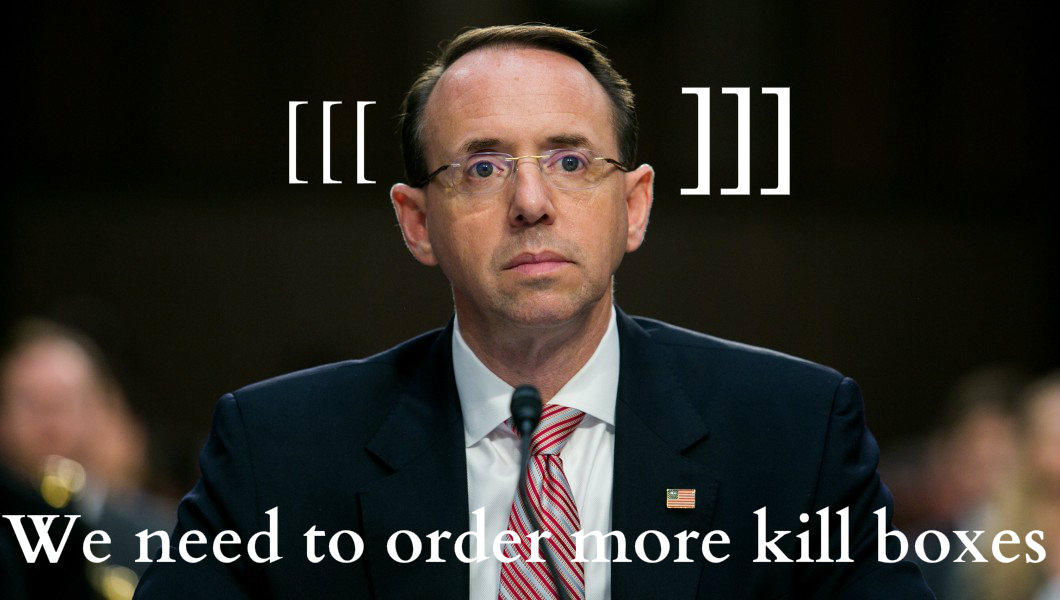 I’m always willing to look at the evidence and be proven wrong, but yeah, I’m leaning heavily white hat now. 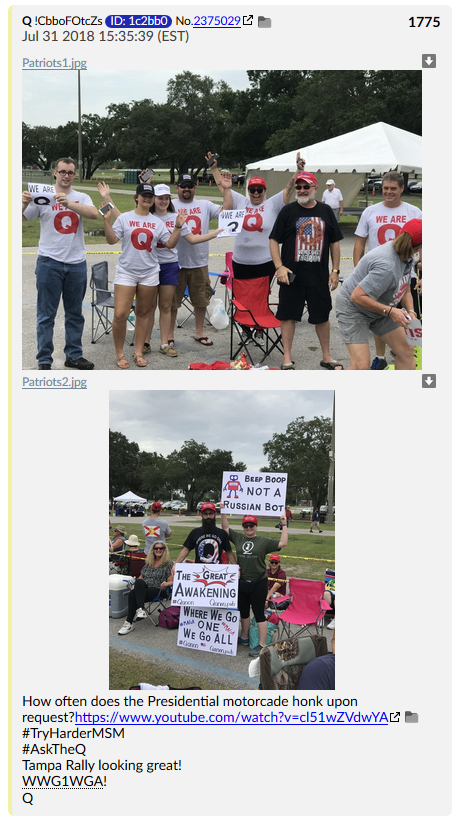 We’ve got the best honkers, folks! 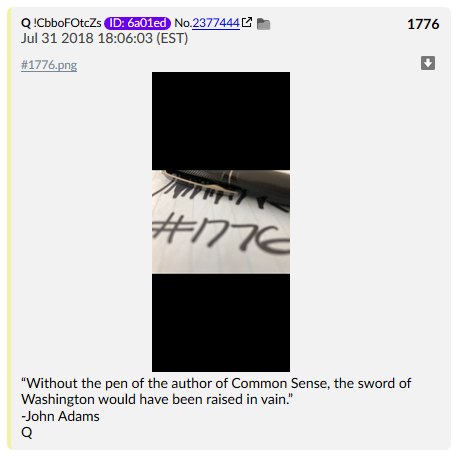 Gotta throw the pen on the clock though, like we’ve done in the past.

#Anon connects it to [18] on the #QClock – which brings us to CHRISTMAS! 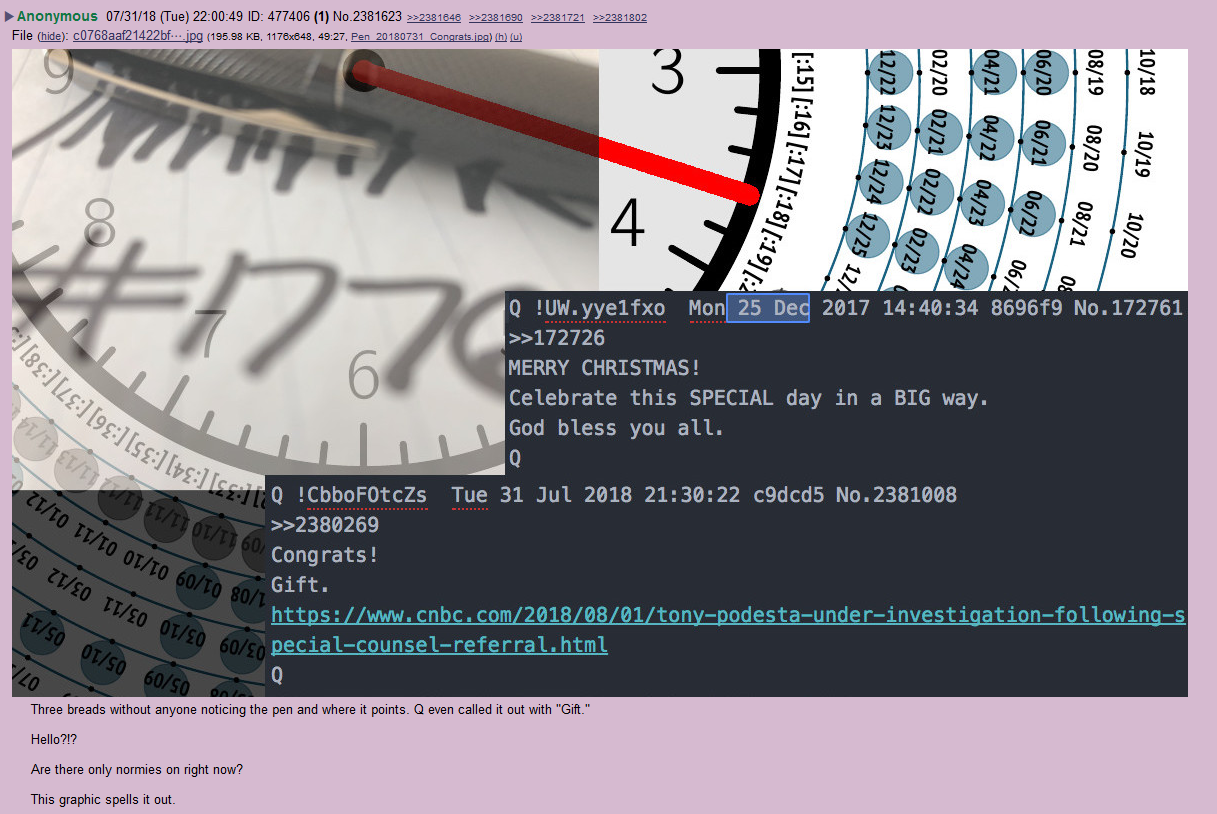 We’ll look at Q’s “gift” in just a moment here.

GIVE US THAT SAUCE, BOSS!

1st anon is referring to Trump repeating “17 times” multiple times during his speech from the rally in Tampa tonight: Second anon posts a link to a Hill report: 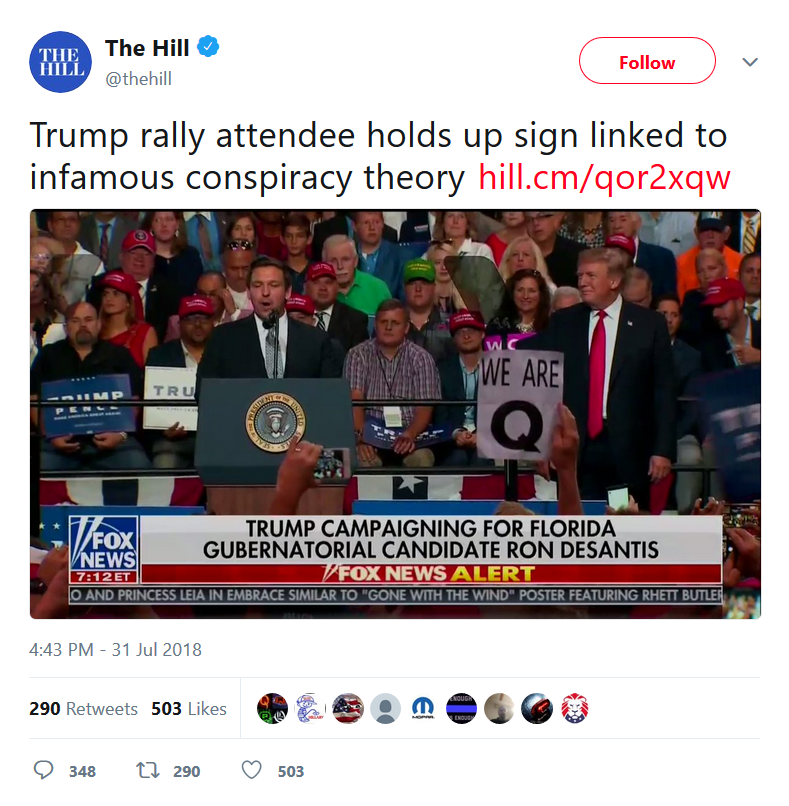 And now to look at the “gift” Q gave us, earlier: 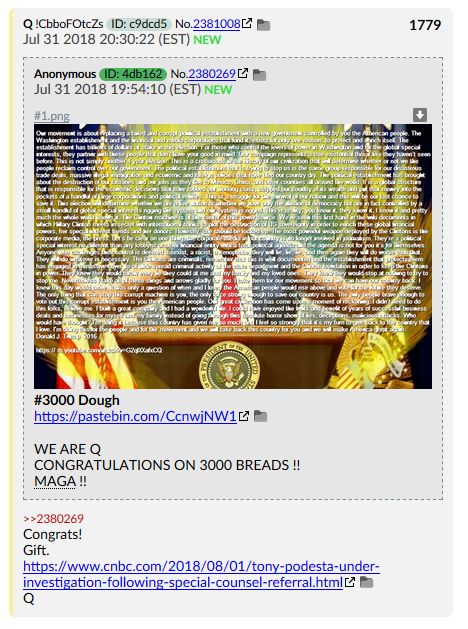 NBC News previously reported that special counsel Robert Mueller had been looking into Tony Podesta and his Democratic-leaning lobbying firm as part of its broader investigation into the finances of former Trump campaign chairman Paul Manafort.

IT’S JUST WHAT I ALWAYS WANTED, Q! HOW DID YOU KNOW?!

Prosecutors for the U.S. Attorney’s Office for the Southern District of New York opened the investigation following a referral from the office of special counsel Robert Mueller, the sources told NBC.

And would you look at that referral? Just more ammo for my Mueller/RR white-hat theory, that so many have so much trouble with. 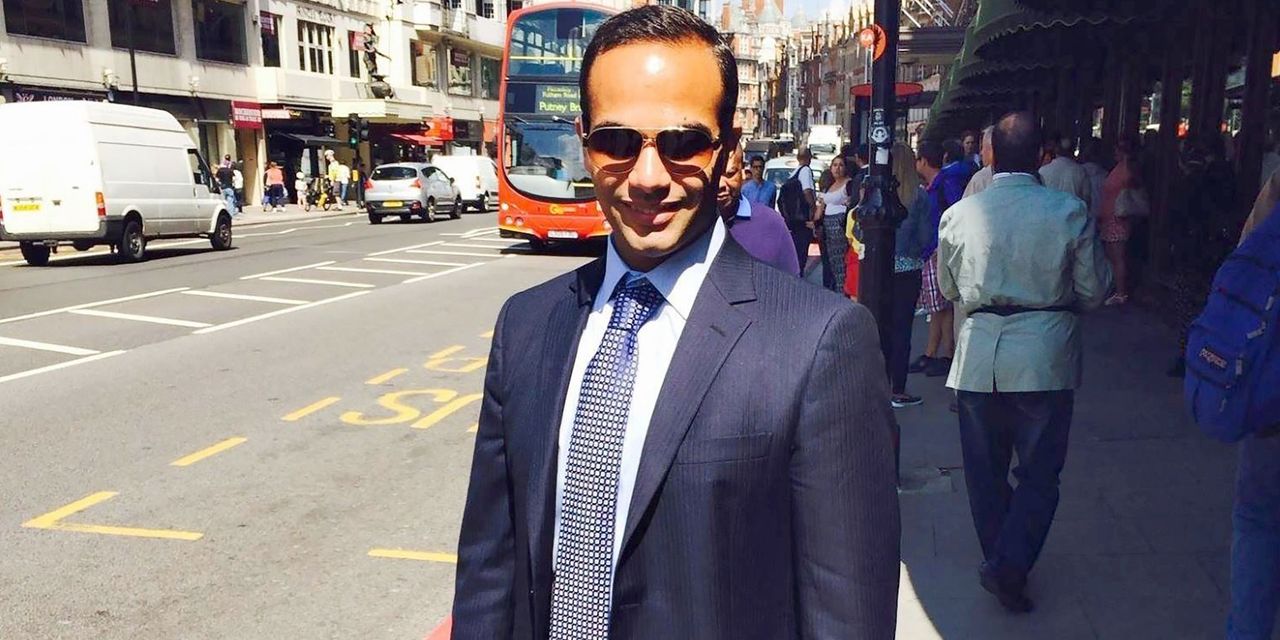 What Are the FBI and CIA Hiding?

The agency might have led the bureau down a rabbit hole in the 2016 Trump counterintelligence probe.

Did the Central Intelligence Agency lead the Federal Bureau of Investigation down a rabbit hole in the counterintelligence investigation of Donald Trump’s 2016 presidential campaign?

Although the FBI’s case officially began July 31, 2016, there had been investigative activity before that date. John Brennan’s CIA might have directed activity in Britain, which could be a problem because of longstanding agreements that the U.S. will not conduct intelligence operations there. It would explain why the FBI continues to stonewall Congress as to the inquiry’s origin.

Further, what we know about the case’s origin does not meet the threshold required by the attorney general guidelines for opening a counterintelligence case. That standard requires “predicate information,” or “articulable facts.”

From what has been made public, all that passes for predicate information in this matter originated in Britain. Stefan Halper, an American who ran the Centre of International Studies at Cambridge, had been a CIA source in the past. Recent press reports describe him as an FBI informant. Joseph Mifsud, another U.K.-based academic with ties to Western intelligence, met with Trump campaign aide George Papadopoulos on April 26, 2016. Mr. Mifsud reportedly mentioned “dirt” on Hillary Clinton. Then, on May 10, Mr. Papadopoulos met with Australian Ambassador Alexander Downer in London, to whom he relayed the claim about “dirt” on Mrs. Clinton.

Although Mr. Brennan has exposed himself as a biased actor, the CIA has escaped criticism for using only thinly sourced information from British intelligence to snooker the FBI. Most damaging is the possibility that the CIA violated agreements with Britain by spying there rather than asking MI5 or MI6 to do so. And that may be what is really being withheld from Congress.

UK in the killbox!! 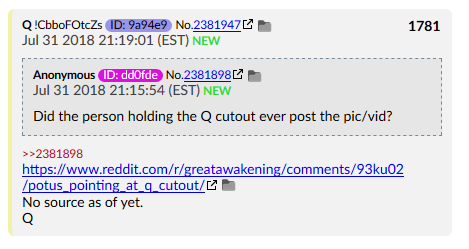 Closest Q has gotten to finding a source for that video, he wanted: POST IT ALREADY, FAGGOT. I KNOW YOU’RE OUT THERE!

This anon gets bonus points for creative and contextually correct usage of the word “snookered.” Both he, and the anon below, are talking about Q’s WSJ article. 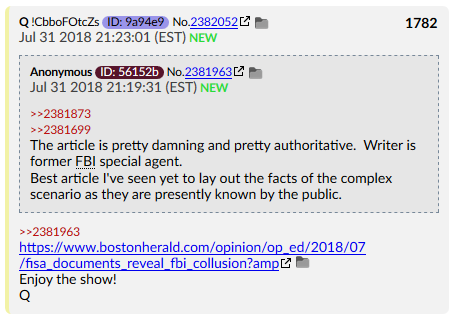 Our media’s valiant efforts to distract us notwithstanding, information continues to seep out that underscores how badly a housecleaning is needed in Washington, D.C.

Our media’s valiant efforts to distract us notwithstanding, information continues to seep out that underscores how badly a housecleaning is needed in Washington, D.C.

Last week saw the release of the applications used to obtain warrants from the FISA court to spy on Carter Page, an adviser to the Trump presidential campaign. Obtained by Judicial Watch, the 400-plus pages of (heavily redacted) documents support the conclusions earlier drawn by the House Intelligence Committee (and denounced by Democrats as hysteria): the FISA warrants were obtained through obfuscation and deceit.

As various commentators predicted would be proven, the bulk of the information that formed the basis for the FISA warrant applications was the “dossier” of allegations about Donald Trump’s activities in Russia. This dossier was provided to the FBI by British spy Christopher Steele. Steele was hired during the 2016 presidential campaign by opposition research firm Fusion GPS, who was paid by Hillary Clinton’s law firm Perkins Coie, who was paid by the Clinton campaign and the DNC. The allegations were scandalous and completely unverified, in violation of federal statutes and FISA court rules.

In other words, the FBI used oppo research paid for by the Democrats as justification for government spying on a political opponent and other Americans.

But there’s more. In another incredible coincidence, Fusion GPS had hired scholar and professor Nellie Ohr as a “paid Russian expert.” Nellie Ohr happens to be married to Bruce Ohr, deputy attorney general in the Justice Department. Bruce Ohr is alleged to have passed his wife’s anti-Trump research to the FBI. He was demoted for failing to disclose not only his wife’s employment with Fusion GPS, but also his own meetings with Fusion GPS founder Glenn Simpson.

As usual, please – read the whole thing. It’s well worth your time. 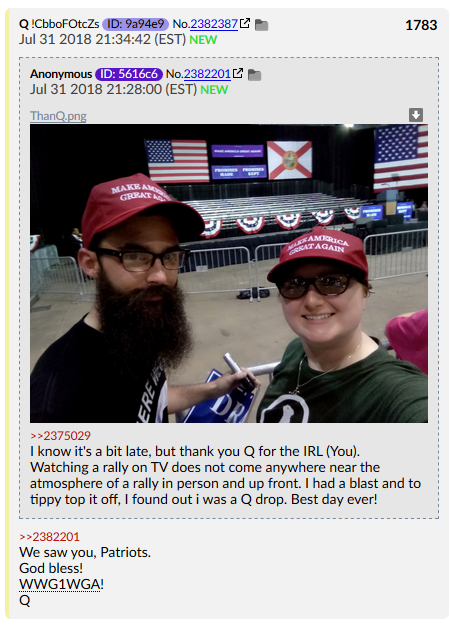