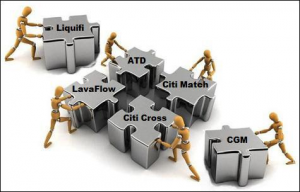 The Securities and Exchange Commission (SEC), which has had two separate Wall Street lawyers at its helm for the past five years (under both the Wall Street- friendly Obama administration as well as the current Trump administration), has released a 558-page document that attempts to pass itself off as reforming Wall Street’s Dark Pools. Instead, it simply tinkers around the meaningless edges of reform.

Dark Pools are trading venues that should not exist in an efficient, transparent and honest securities market. They are effectively unregulated stock exchanges being run internally by some of the biggest Wall Street banks on Wall Street: The same banks (like Citigroup, JPMorgan Chase, Goldman Sachs and Merrill Lynch) that have been serially charged with abusing their customers.

Instead of sending their stock trades to the New York Stock Exchange or another independent stock exchange, the big Wall Street banks route the customers’ trades to their internal trading venue – raising enormous conflicts of interests which the SEC fully acknowledges in its rule-making document. The SEC uses the old canard that liquidity will be harmed if it doesn’t continue to allow these outrageous conflicts to exist.

As we previously reported (see related articles below), not only is the SEC allowing these Wall Street banks to trade each other’s bank stocks in their Dark Pools, the banks are also being allowed to trade their own bank stock in their own Dark Pool.

This is the second time that the Wall Street “regulators” have put on a show of bringing transparency to Dark Pools. On June 2, 2014, Wall Street’s crony self-regulator, FINRA, began reporting three-week old, weekly aggregated trading data to the public. But that aggregated trading data does not allow one to see: if the trades are manipulative, i.e., being made at the open or close or at times when the market is slumping; if the prices at which the stocks are traded in the Dark Pool are away from the market; if one Wall Street bank’s Dark Pool is trading with another bank’s Dark Pool to create a false market; if the Dark Pool is frontrunning its own customers’ orders, and on and on.

The SEC has at times functioned like a Dark Pools’ own lawyer – blocking access to basic information. In 2014, Wall Street On Parade became curious about the Dark Pool owned by Citadel Securities LLC after a series of fines against the parent for egregious conduct.

On January 9, 2014, the New York Stock Exchange charged Citadel Securities LLC with engaging in wash sales 502,243 times using its computer algorithms. A wash sale occurs when the buyer and the seller are the same entity and there is no change in beneficial ownership. Wash sales are illegal because they can manipulate stock prices up or down. Citadel paid a paltry $115,000 fine for half a million violations.

On June 25, 2014, Citadel Securities LLC received a heftier fine totaling $800,000 by its various regulators. Citadel was allowed by the regulators to pay the fines without admitting or denying the charges. This is what the New York Stock Exchange said Citadel had done:

“The firm sent multiple, periodic bursts of order messages, at 10,000 orders per second, to the exchanges. This excessive messaging activity, which involved hundreds of thousands of orders for more than 19 million shares, occurred two to three times per day.”

The New York Stock Exchange also said Citadel “erroneously sold short, on a proprietary basis, 2.75 million shares of an entity causing the share price of the entity to fall by 77 percent during an eleven minute period.” In another instance, according to the NYSE, Citadel’s trading resulted in “an immediate increase in the price of the security of 132 percent.”

We filed a Freedom of Information Request with the SEC asking for basic information about Apogee, Citadel’s Dark Pool.  The SEC responded in a letter dated August 12, 2014, writing that “we have determined to withhold records responsive to your request….”

There can be serious, cataclysmic consequences to letting big Wall Street banks operate in the dark, as we learned with Citigroup in 2008. Darkness surrounded its off balance sheet “assets” and its derivatives, which were heavily interconnected to other Wall Street banks. As its stock lost 90 percent of its value, signaling the distrust the rest of Wall Street had in its soundness, it created a panicky contagion on Wall Street. And because of the repeal of the Glass-Steagall Act under the Bill Clinton administration, this casino bank was allowed (to this very day) to hold Federally insured deposits, ultimately backstopped by the U.S. taxpayer. Citigroup went on to receive the largest financial bailout in U.S. history from 2007 through at least the middle of 2010.

There is another lesson from history regarding allowing Wall Street banks to become dark gambling dens. When Bank of United States collapsed in late 1930, prior to the enactment of Federal deposit insurance, it was the fourth largest depositor bank in New York City, holding $268 million for over 400,000 small time depositors. The bank’s name had wrongly suggested that it had U.S. government backing. It did not. Media reports of the collapse fueled other bank runs around the country.

Bank of United States had a stock trading arm, the Bankus Corp. It was through that trading unit that the bank manipulated the price of its own stock, using the money of depositors, and then used the shares as collateral for loans. Banking examiners later determined that other banks had acted in a similar fashion.

Insider View: The Tragedy of the U.S. Deep State

Debt Bubble: How Long Will It Last? | Michael Lee