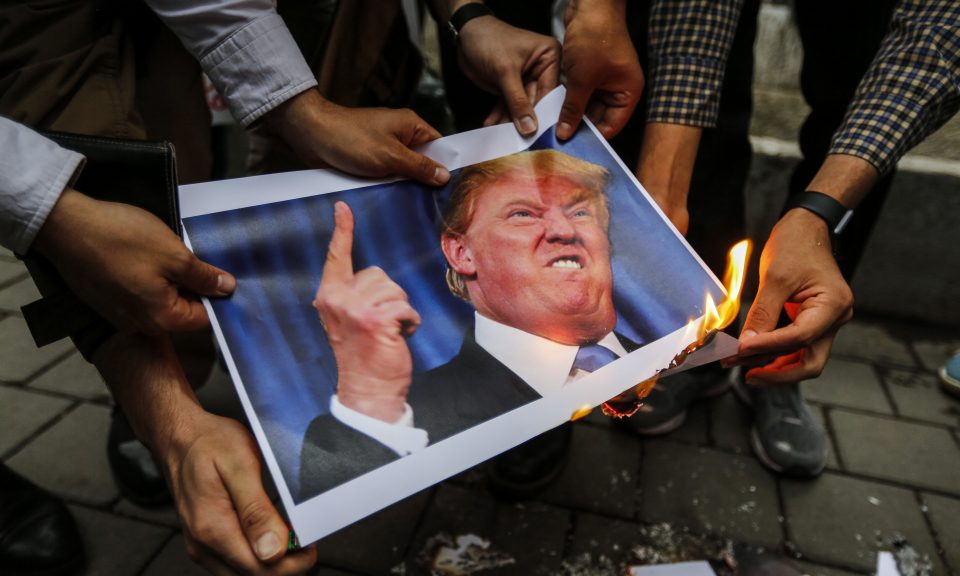 The Trump administration’s ultimate goal is regime change in Tehran, but was this just a distraction from the ‘treason’ in Helsinki as US Mid-Term elections loom? Or did he just want to destabilize the Eurasian giants and their New Silk Roads?

resident Trump’s late-night, all-caps Tweet of Mass Destruction threatening Iran is bound to be enshrined in the Art of Diplomacy annals.

But let’s go back to how this all started. After unilaterally pulling out of the Iran nuclear deal, the Trump administration has issued what amounts to a declaration of economic war on Iran and will go no holds barred to squeeze the Islamic Republic out of the global oil market – complete with threatening allies in Europe with secondary sanctions, unless they cut all imports of Iranian oil by November 4.

This past weekend, Iran’s Supreme Leader Ayatollah Khamenei said he would support blocking all Middle East oil exports through the Strait of Hormuz if Iran’s European trade partners succumb to pressure from Washington and stop buying Iranian oil altogether.

Then President Hassan Rouhani followed Khamenei and warned the US about “playing with the lion’s tail.”

Rouhani, as his record attests, has always behaved as the epitome of cool diplomacy. Contrary to predictable US media spin, he never “threatened” to attack the US. His premise was that Tehran was pleased to offer Washington the “mother of all peace.” But if Trump instead decided to attack Iran, then (italics mine) that would open the way to the Mother of all Wars.

The fact remains that the Trump administration ditched a UN-sponsored multilateral treaty and has now launched serious covert ops with the ultimate goal of regime change in Iran.

Trump’s explosion of rage, coupled with US Secretary of State Mike Pompeo’s touting of the interests of “the long-ignored voice of the Iranian people” has been met with derision and scorn all across Iran.

Geopolitically, Russia-Iran relations remain extremely solid, as shown by the recent meeting between President Putin and Khamenei’s top foreign policy adviser Ali Akbar Velayati. As Professor Mohammad Marandi at the University of Tehran told me: “The Putin-Velayati meeting went very well. Velayati plans to go to Beijing in a few weeks. People in Iran hate Trump, and all political parties and factions have become much more united. Rouhani’s speech was widely watched and very well received.”

Khamenei and Rouhani are on the same page – and that’s very significant in itself. They now agree any negotiation with Washington is futile. Iran’s Foreign Minister Javad Zarif provided the coup de grace, tweeting that Iran had lasted millennia and had seen many empires fall. He wrapped up with an all-caps Trumpism: “BE CAUTIOUS!”

The whole soap opera is ridden with pathetic overtones as US “experts” posing as extras digress that there are only two outcomes left for Iran: capitulation or implosion of the “regime”.

Anyone claiming Tehran will capitulate shows an utter ignorance of the overall mood of defiance and scorn among the Iranian people, even as they are faced with massive economic hardship. And anyone stating there will be regime change in Tehran basically parrots a US “policy” that is just wishful thinking.

The US neo-conservatives that brought the world the failed, multi-trillion-dollar Iraq war should have been buried not six feet, but six miles under. Yet, like the Walking Dead, they will never give up.

But, in the Middle East, at the moment there are three characters who are singin’ and dancin’ like everything is going according to plan: Saudi Arabia’s Mohamed Bin Salman (MBS), his mentor, the United Arab Emirates’ Mohamed bin Zayed, and Israeli Prime Minister Benjamin Netanyahu.

Surely they are not heeding the expert advice of former Mossad head Meir Dagan, who stated that a military attack on Iran was “the stupidest thing I have ever heard.”

It’s always possible that Trump’s all-caps spectacular may be a ruse to distract Americans from the Helsinki “treason” scandal. That gets traction when associated to the looming mid-term elections and Trump’s absolute need to sound tough and keep the Republicans in line. Call it a brilliant Trump strategic maneuver. Or was it Putin’s?

Back to reality, the stark options would come down to either Iran becoming a US satellite or closing the Strait of Hormuz – something that for all practical purposes would collapse the global economy.

I have been assured that the Islamic Revolutionary Guard Corps has the technological means to block the Strait and would not flinch to go for it rather than yield, if the going gets tough. President Rouhani cannot resist the IRGC. The Trump administration has, in fact, forced Rouhani to show his cards. All branches of the Iranian government are now united.

War hysteria, already on, is extremely irresponsible. In the worst Strait of Hormuz scenario, the US Navy would be impotent, as Russian-made SS-N-22 Sunburn missiles could wreak havoc. Washington could only bomb from Al Udeid Air Base in Qatar or Incirlik in Turkey. Neither Qatar nor Turkey is inclined to antagonize Iran.

The Pentagon would have to bomb coastal missile sites on Iran’s Persian Gulf shoreline. But these are heavily camouflaged; missiles are portable, and there’s no reliable on the ground intel. Iran only needs to fire one missile at a time. No oil tanker would possibly try to get through.

Things don’t even need to degrade towards a shooting war. All Tehran needs to do is to make the threat credible. Insurance companies would stop insuring oil carriers. No oil carrier will navigate without insurance.