Sometimes details obscure the bigger picture. The following graphs do not show most of the details and “noise.” These log-scale graphs show one bar every four years (plus April 2018) based on official debt on July 1st, or the average of monthly closes every fourth year for M3, stock indices, houses and commodities.

#1: The official national debt of the United States.

#4: The DOW and NASDAQ rose exponentially as the dollar devalued. But markets often move too far and too fast. The corrections, such as 1987, 2000 and 2008, can be painful for everyone.

SO WHAT IS THE PROBLEM? 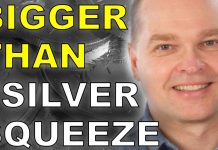