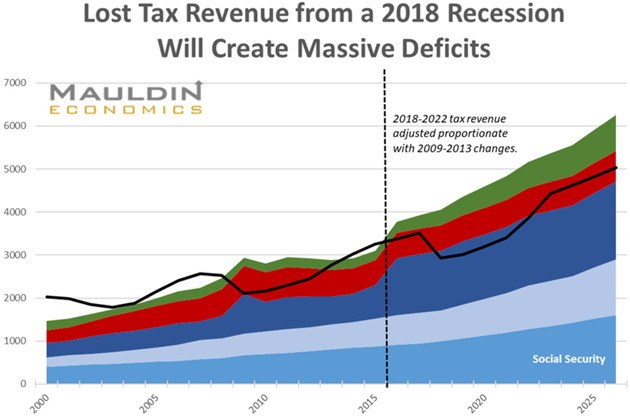 My friend Dr. Woody Brock, one of the best economists and social commentators that I know, wrote a marvelous essay this last week about part of the entitlement issues. I’m going to close with a few lines from his letter. You can see some of his other work at www.SEDinc.com. His more exclusive quarterly Profiles are a treasure trove of economic insight. (Occasionally he lets me share them in Over My Shoulder, by the way.) Now to the beginning of his latest Profile:

The death of the extended family throughout the G-7 nations during 1850-1950 will go down as one of the most momentous developments of past centuries. For it is this development that gave rise to the modern welfare state with its crippling retirement and medical promises made to all citizens. How did today’s entitlements crisis begin, why does it get ever larger, and what can be done about it?

President Trump’s tax reform bill has rightly been criticized for inflating the US fiscal deficit. To many, this was unconscionable at a point when US federal debt is already 100% of GDP. Yet like everyone else, these critics have been mum on the far greater growth of debt that will accrue from ever-exploding entitlements expenditures. This latter prospect was identified a decade ago by the bi-partisan Simpson-Bowles committee as by far the gravest threat to the future of the US.

CBO projections show that within 18 years, entitlements spending will absorb all US federal tax revenues—leaving no revenues even for interest expense on the debt and for the military. In Germany, which proudly pays annually for its expenditures without incurring debt, Deutche Bank has estimated that by 2045, income tax rates of 80% (total, not marginal rates) would be needed for its PAYGO system. The entire workforce of the nation would be in bondage to the elderly. Other nations face even worse prospects.

Those spending projections and massive deficits are going to happen in the 2020s. Here is a graph that we used last year showing what is likely to happen during the next recession (which I now think we will likely avoid this year, but it is coming), if tax revenue falls to the same degree it did in the last one.

We will have at least a $2 trillion deficit in the next recession, plus a bear market that leaves pensions even more underfunded, and a slower recovery because high debt crowds out future growth. Numerous academic studies back up that statement.

I think a future Democratic Congress and president, or maybe a split Congress that is desperate for funding, will enact a Value-Added Tax (VAT) in response to this. At least that is what I hope. Woody is a little more pessimistic than I am and thinks, quoting at the end of his analysis, that politics and not demographics is the problem:

Furthermore, why need benefits be trimmed much less slashed when the staggering new wealth of the top 10% can be taxed to pay for all promised benefits? Today’s obsession with the growth of inequality will significantly impact how the US will resolve the entitlements issue. The nation will not cut benefits because doing so will prove politically impossible, as President Clinton has long stressed.

Rather, the nation will fund its promised Social Security and Medicare benefits via the only kind of tax that can raise the staggering sums needed to fund them: a net-worth tax on, say, the top 15% of the population. Raising income tax rates on the rich will not raise anywhere near the amount needed for the next 40 years. Only a net-worth tax can do so.

Here are the relevant mathematics. As already stated, the net worth of US households has now reached $100 trillion. The top 15% wealthiest families own 90% of this wealth, or about $90 trillion. When push comes to shove, resistance by the rich against a wealth tax will be swamped by the political reality that a good 60% of Americans will be obsessed with funding their old age. Thus, rich as they are, the very wealthy will have little political leverage with which to fend off an annual net-worth tax.

The political logic will be: “Look, you rich people have had a return on your wealth of over 6% during the past hundred years. Why should this change very much? But if this is so, then it is time for you to pay your fair share, that is, to part with 2.5% of your total net worth annually. Your wealth will still continue to grow. With increased annual tax revenue of some $2.5 trillion, it will be possible for Americans to receive their promised benefits.”

We would expect the same logic to translate into additional net-worth taxes at the state and municipal level.

The fallout from such a policy will of course be disastrous.