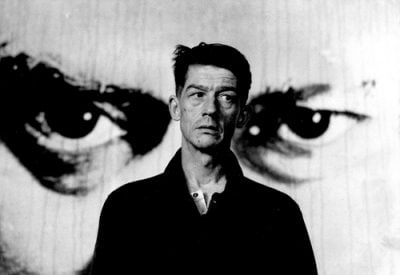 Christianity gave Eros poison to drink; he did not die of it, certainly, but degenerated to Vice.” – Frederick Nietzsche, Beyond Good and Evil

“Ours is essentially a tragic age, so we refuse to take it tragically. The cataclysm has happened, we are among the ruins, we start to build up new little habitats, to have new little hopes. It is rather hard work: there is now no smooth road into the future: but we go round, or scramble over the obstacles. We’ve got to live, no matter how many skies have fallen.” – D. H. Lawrence, Lady Chatterley’s Lover

“The so-called consumer society and the politics of corporate capitalism have created a second nature of man which ties him libidinally and aggressively to the commodity form.  The need for possessing, consuming, handling and constantly renewing gadgets, devices, instruments, engines, offered to and imposed upon the people, for using these wares even at the danger of one’s own destruction, has become a ‘biological’ need.” – Herbert Marcuse, One Dimensional Man

There is a vast literature analyzing the political prophecy of George Orwell’s Nineteen Eighty-Four.  Big Brother, double-speak, telescreens, crimestop, etc. – all applied to our current political situation.  The language has become part of our popular lexicon, and as such, has become clichéd through overuse.  Blithe, habitual use of language robs it of its power to crack open the safe that hides the realities of life. 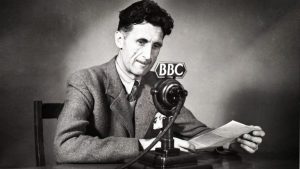 There is no doubt that Orwell wrote a brilliant political warning about the methods of totalitarian control.  But hidden at the heart of the book is another lesson lost on most readers and commentators.  Rats, torture, and Newspeak resonate with people fixated on political repression, which is a major concern, of course.  But so too is privacy and sexual passion in a country of group-think and group-do, where “Big Brother” poisons you in the crib and the entertainment culture then takes over to desexualize intimacy by selling it as another public commodity.

The United States is a pornographic society.  By pornographic I do not just mean the omnipresent selling of exploitative sex through all media to titillate a voyeuristic public living in the unreality of screen “life” and screen sex through television, movies, and online obsessions.  I mean a commodified consciousness, where everyone and everything is part of a prostitution ring in the deepest sense of pornography’s meaning – for sale, bought.  And consumed by getting, spending, and selling.  Flicked into the net of Big Brother, whose job is make sure everything fundamentally human and physical is debased and mediated, people become consumers of the unreal and direct experience is discouraged.  The natural world becomes an object to be conquered and used.  Animals are produced in chemical factories to be slaughtered by the billions only to appear bloodless under plastic wrap in supermarket coolers.  The human body disappears into hypnotic spectral images. One’s sex becomes one’s gender as the words are transmogrified and as one looks in the mirror of the looking-glass self and wonders how to identify the one looking back.  Streaming life from Netflix or Facebook becomes life the movie.  The brilliant perverseness of the mediated reality of a screen society – what Guy Debord calls The Society of the Spectacle – is  that as it distances people from fundamental reality, it promotes that reality through its screen fantasies.  “Get away from it all and restore yourself at our spa in the rugged mountains where you can hike in pristine woods after yoga and a breakfast of locally sourced eggs and artisanally crafted bread.”  Such garbage would be funny if it weren’t so effective.  Debord writes,

The spectacle is not a collection of images, but a social relation among people, mediated by images….Where the real world changes into simple images, the simple images become real beings and effective motivations of hypnotic behavior.

Thus sex with robots and marrying yourself are not aberrations but logical extensions of a society where solipsism meets machine in the America dream.

As this happens, words and language become corrupted by the same forces that Orwell called Big Brother, whose job is total propaganda and social control.  Just as physical reality now mimics screen reality and thus becomes chimerical, language, through which human beings uncover and articulate the truth of being, becomes more and more abstract.  People don’t die; they “pass on” or “pass away.”  Dying, like real sex, is too physical.  Wars of aggression don’t exist; they are “overseas contingency operations.”  Killing people with drones isn’t killing; it’s “neutralizing them.”  There are a “ton” of examples, but I am sure “you guys” don’t need me to list any more.

Orwell called Big Brother’s language Newspeak, and Hemingway preceded him when he so famously wrote in disgust In a Farewell to Arms,

“I was always embarrassed by the words sacred, glorious, and sacrifice, and the expression in vain….Abstract words such as glory, honor, courage, or hallow were obscene…”

This destruction of language has been going on for a long time, but it’s worth noting that from Hemingway’s WW I through Orwell’s WW II up until today’s endless U.S. wars against Afghanistan, Iraq, Yemen, Syria, Libya, etc., there has been the parallel development of screen and media culture, beginning with silent movies through television and onto the total electronic media environment we now inhabit – the surround sound and image bubble of literal abstractions that inhabit us, mentally and physically.  In such a society, to feel what you really feel and not what, in Hemingway’s words, “you were supposed to feel, and had been taught to feel” has become extremely difficult.

Image below: Winston Smith and Julia hidden in the bushes, away from their reality (Source: Pinterest) 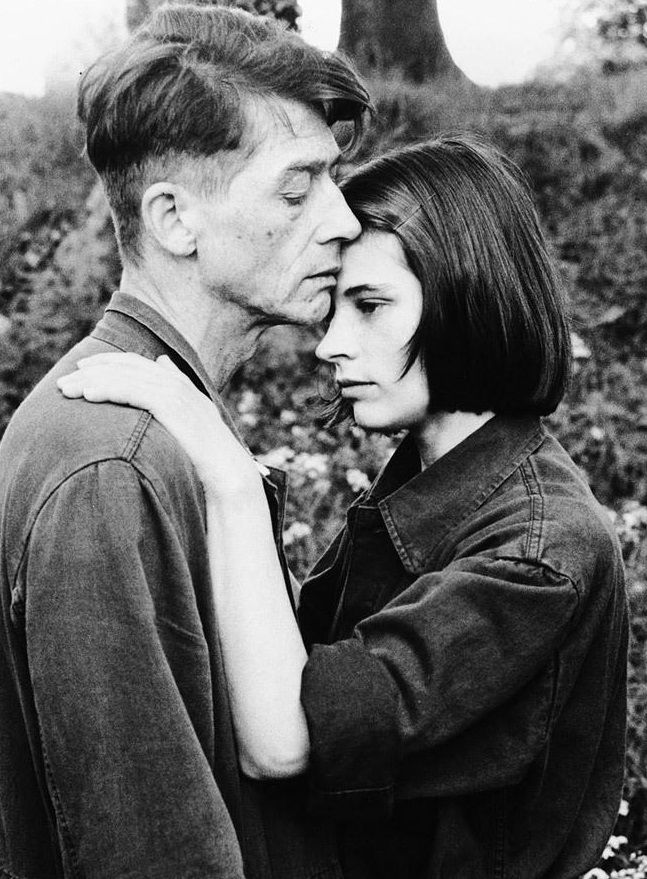 Language, as the Greeks told us, should open up a clearing for the truth (Greek aleitheia, unhiddenness) to emerge so we can grasp the essence of life.  And so it is ironically appropriate that Orwell’s Winston Smith discovers such essence, not in analyzing Crimestop, his tormenter O’Brien, or Doublethink, but “in a natural clearing, a tiny grass knoll surrounded by tall saplings that shut it in completely” where he secretly meets a young woman who had passed him a note saying she loved him.   Away from the prying eyes of Big Brother and his spies, amidst bluebells and a torrent of song from a thrush, they come together almost wordlessly.

“Winston and Julia clung together, fascinated” as the thrush sang madly.  “The music went on and on, minute after minute, with astonishing variations, never once repeating itself, almost as if the bird were deliberately showing off its virtuosity…He stopped thinking and merely felt.”

Here the secret lovers affirm their humanity, the truth of sexual intimacy that is the enemy of all abstractions used by the powerful to control and manipulate normal people and to convince them to participate in killing others.

“Almost as swiftly as he had imagined it, she had torn her clothes off, and when she flung them aside it was with that same magnificent gesture by which a whole civilization seemed to be annihilated.”

Reveling in love-making in a free space outside the Party’s control, they felt they had triumphed.

But as we learn in 1984 and should learn in the U.S.A. today, “seemed” is the key word.  Their triumph was temporary.  For sexual passion reveals truths that need to be confirmed in the mind.  In itself, sexual liberation can be easily manipulated, as it has been so effectively in the United States. “Repressive de-sublimation” Herbert Marcuse called it fifty years ago. You allow people to act out their sexual fantasies in commodified ways that can be controlled by the rulers, all the while ruling their minds and potential political rebelliousness. Sex becomes part of the service economy where people service each other while serving their masters.  Use pseudo-sex to sell them a way of life that traps them in an increasingly totalitarian social order that only seems free.  This has been accomplished primarily through screen culture and the concomitant confusion of sexual identity.  Perhaps you have noticed that over the past twenty-five years of growing social and political confusion, we have witnessed an exponential growth in “the electronic life,” the use of psychotropic drugs, and sexual disorientation.  This is no accident.  Wars have become as constant as Eros – the god of love, life, joy, and motion – has been divorced from sex as a stimulus and response release of tension in a “stressed” society.  Rollo May, the great American psychologist, grasped this:

Indeed, we have set sex over against eros, used sex precisely to avoid the anxiety-creating involvements of eros…We are in flight from eros and use sex as the vehicle for the flight…Eros [which includes, but is not limited to, passionate sex] is the center of vitality of a culture – its heart and soul.  And when release of tension takes the place of creative eros, the downfall of the civilization is assured.

Because Julia and Winston cannot permanently escape Oceania, but can only tryst, they succumb to Big Brother’s mind control and betray each other.  Their sexual affair can’t save them.   It is a moment of beauty and freedom in an impossible situation.  Of course the hermetically sealed world of 1984 is not the United States.  Orwell created a society in which escape was impossible. It is, after all, an admonitory novel – not the real world.  Things are more subtle here; we still have some wiggle room – some – although the underlying truth is the same: the U.S. oligarchy, like “The Party,” “seeks power entirely for its own sake” and “are not interested in the good of others,” all rhetoric to the contrary. Our problem is that too many believe the rhetoric, and those who say they don’t really do at the deepest level.  Fly the flag and play the national anthem and their hearts are aflutter with hope.  Recycle old bromides about the next election when your political enemies will be swept out of office and excitement builds as though you had met the love of your life and all was well with the world.

The great secret of morals is love; or a going out of our nature, and an identification of ourselves with the beautiful which exists in thought, action, or person, not our own. A man, to be greatly good, must imagine intensely and comprehensively; he must put himself in the place of another and of many others; the pains and pleasure of his species must become his own. The great instrument of moral good is the imagination.

We are now faced with the question: Can we escape the forces of propaganda and mind control that run so very deep into American life?  If so, how?  Let’s imagine a way out.

The mask is off: WEF’s Klaus Schwab declares China a ‘role model’