China appears to have more to lose from a trade war with the US simply because the math behind surpluses and deficits renders the Bubble Blowers in Beijing at a big disadvantage. When you get right down to the nuclear option in a trade war, Trump could impose tariffs on all of the $505 billion worth of Chinese exported goods, while Premier Xi can only impose a duty on $129 billion worth of US exported goods–judging by the announcement on July 10thh of additional tariffs on $200 billion more of China’s exports to the US we are well underway towards that end. However, this doesn’t mean China completely runs out of ammunition to fight the battle once it hits that limit.

The Chinese could seek to significantly devalue the yuan once again, as the nation did starting in the summer of 2015. Indeed, it could be exactly what they are doing right now. 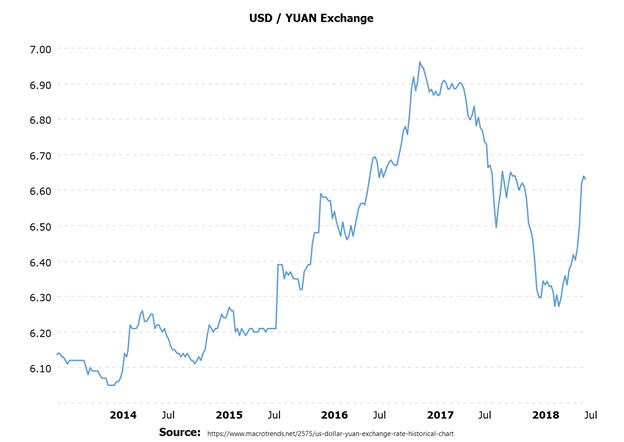 This would partially offset the effect from the tariffs placed on its exports. However, it would also increase the debt burden on Chinese, and other Emerging Market (EM) dollar-based loans, which total over $11 trillion in. If EM countries that conduct trade with China allowed their currencies to appreciate greatly against the yuan, their exports would become uncompetitive. Therefore, in order to maintain a healthy trade balance with China, these nations would have to devalue their currencies alongside the yuan; causing a contagion effect. The last time China devalued the yuan was in 2015 and it caused chaos in global currency and equity markets.

China could also dump $1.2 trillion worth of its US Treasury holdings. The timing for this would hurt the US particularly hard because deficits are already projected to be over $1 trillion in fiscal 2019 that begins in October. When you add to this the Fed’s reverse Quantitative Easing (QE) plan of selling $600 billion worth of Mortgage Backed Securities (MBS) and Treasures, you get a condition that could completely overwhelm the private sector’s demand for this debt. Of course, a trade war with China also means there will be less of a trade surplus to recycle back into US markets. And if the incipient trade war leads to a recession in the US, deficits would soar much further than the already daunting $1 trillion level.

When you combine the baseline fiscal 2019 deficit of over $1 trillion, with $600 billion from Quantitative Tightening, with a potential Chinese dumping of hundreds of billions from its $1.2 trillion worth of Treasury reserves, along with hundreds of billions dollars more added to the deficit arising from the reduced revenue from a slowdown in global commerce; the potential total deluge of debt that needs to be absorbed by the public in the next fiscal year could easily breach $3 trillion dollars!

If you’re looking for the pony behind that dung pile you could say that the yield curve perhaps would not invert in this scenario as quickly as it is now—maybe—but the spread between the 2-10 Year Note has collapsed from 265 (basis points) bps in 2014 to just 27 bps today. Hence, the next 25bp rate hike from the Fed in September could be enough to flatten out the curve completely. Nevertheless, the resulting yield shock would be much worse than your typical inversion because runaway long-term bond yields are the last thing this massively overvalued equity market, which sits on top of record debt levels, can endure.

In other words, this upcoming tsunami of debt issuance would equate to a giant black hole that would suck all available investment capital from the private sector and send it towards the wasteful arms of government—the opposite effect of a tax cut. This would virtually guarantee a sharp slowdown in productivity and GDP growth. In truth, a productivity slowdown is something the US economy cannot afford at this time because Non-farm Productivity increased by a paltry 0.4% annual rate in Q1. 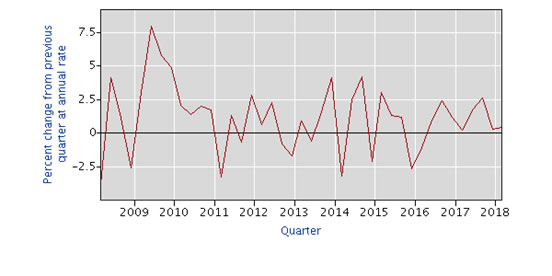 Since GDP is the sum of labor force + productivity growth, a further slowdown in productivity from here would be extremely recessionary, especially given the slowdown in US immigration and fecundity rates.

The major takeaway here is that China has more bullets in the chamber other than just putting a tariff on all US exports. And even though China has more to lose on face value, an all-out trade war is an extremely negative sum game for all parties involved.  The resulting global recession, which is already approaching due to the impending complete removal of central banks’ bid for inflated asset prices on a net basis, is becoming expedited and exacerbated by the Trade war.