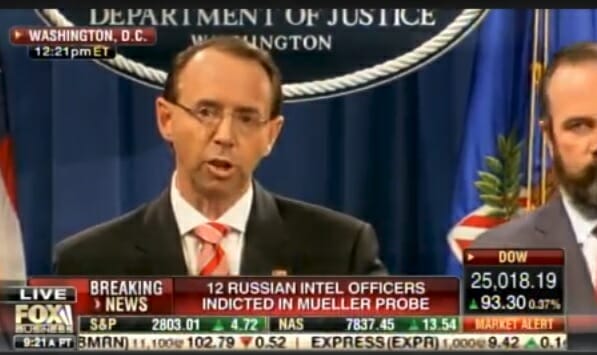 Rosenstein also planned his press conference at the same time President Trump was meeting with the Queen of England.

With the 12 Russians indicted Friday, the corrupt Mueller team has now indicted 31 individuals and 3 companies, with more than 80% of the indictments related to Russians who will never be prosecuted.

But dirty cop Rosenstein forgot to mention the DNC allowed the Russians to infiltrate their servers.

In her 2017 book, “Hacks: The Inside Story of the Break-ins and Breakdowns that Put Donald Trump in the White House,” Democrat operative Donna Brazile admitted the DNC allowed alleged Russian hackers to steal datafrom the party’s servers.

Donna Brazile says in her new book the Democratic National Committee (DNC) went against professional advice and sat idly for a month while Russians stole data because primaries were still underway in a number of states.

In May, when CrowdStrike recommended that we take down our system and rebuild it, the DNC told them to wait a month, because the state primaries for the presidential election were still underway, and the party and the staff needed to be at their computers to manage these efforts,” Brazile wrote in her new book, “Hacks.”

And in June left-leaning Mother Jones reported in March that President Barack Obama’s National Security Advisor, Susan Rice, ordered officials to ‘stand down’ as Russia allegedly attempted to meddle in the 2016 presidential election.