Todd Horwitz is known as Bubba and is chief market strategist of  Bubba Trading.com. He is a regular contributor on Fox, CNBC, BNN, Kitco, and Bloomberg. He also hosts a daily podcast, ‘The Bubba Show.’ He is a 36-year member of the Chicago exchanges and was one of the original market makers in the SPX.

Before you listen to the podcast, I would like to provide some additional context and background to the discussion, that could offer a deeper understanding and highlight further aspects of the positions and arguments that we will elaborate on with Todd Horwitz.

The Tail is Wagging the Dog

Some time ago, I read an interesting study entitled: “Who sets the price of gold? London or New York?”, written by Martin Hauptfleisch, Tālis J. Putniņš and Brian Lucey. One of the most interesting findings was the following:

“A striking result of our analysis is that although the volume of gold traded in the UK OTC spot market is more than ten times higher than that of the US futures market (78.0% market share compared to 7.7%), the futures market tends to play a more important role in incorporating new information about the value of gold. This result highlights the importance of market structure and instrument type. Our results support the notion that the centralization and relatively transparency of the futures market contribute to its disproportionately large role in price discovery. It is also likely that the low transaction costs, inbuilt leverage and ability to avoid dealing with the underlying asset, make futures contracts an attractive option for those that trade gold as a financial asset, and such trades contribute disproportionately to price discovery.”

To me, this just confirms what I have observed though my experience in the gold industry, that consumers in the western world could easily live without physical gold. We have largely forgotten gold and this is the main reason why we see such huge paper leverage today.

In addition, this is only possible as long as the market players respect the unwritten rule to limit physical delivery to as little as possible. When you look at this issue from that perspective, you also understand why we had up to 500 paper claims at the Comex for every single ounce readily available for delivery in the past.

The authors of the paper also describe the current situation as follows:

“According to the Loco London Liquidity Survey (Murray, 2011), the daily turnover on the London gold spot market alone is in excess of $216 billion, which is comparable in value to US- Australian and US-Canadian dollar foreign exchange settlements (based on 2010 data in Bank for International Settlements, 2011), as well as the daily turnover of all stock exchanges in the world. The average daily dollar volume of the front futures contract over the same period is approximately $22 billion, illustrating the size disparity between our markets.”

As per London gold clearing statistics for 2016, the total trading volume in the London Over-the-Counter (OTC) gold market is estimated at the equivalent of 1.5 million tons of gold. The volume of 100oz gold futures on New York’s COMEX reached 57.5 million contracts during 2016, or 179,000 tons of gold.

If we now take into consideration that only approximately 187,000 tons of gold have actually been mined up to today, the paper scam is just gigantic.

These observations remind me of John Exter, Member of the Federal Reserve Board in the 1950s and the way he described our current monetary system. He saw it in the form of an inverted pyramid, as shown below.

I’m obviously part of a small group of individuals in the western world, that have one thing in common with the banker J. P. Morgan, a person whom I otherwise don’t admire at all. However, he was right in his proclamation that “Gold is money and anything else is credit”.

This, in combination with Exter’s pyramid, provides some important, big-picture context to the fact that as little as 0.3% of all financial assets are invested in gold and related asset classes such as gold mining stocks. In other words, 99.7% of the rest is built with credit based on gold. And Debt is always consumption brought forward.

Another signal I’m following is what I see as historic game changer, which started a few decades ago: The East is buying up the physical gold of the West. At the same time, we can see that certain cultures still see Gold as the highest and purest form of money.

Some of these cultures are located in countries with weak national currencies and/or with natural resources and are therefore economies heavily dependent on the USD. They are among the first to break apart when liquidity is tightening, interest rates rise and the USD strengthens. The future of so-called emerging markets does not look bright, as long as they are integrated into this system.

They will be among the first victims of a global deflation, which is a growing risk on the horizon. Their persistent purchases of physical gold to diversify risk away from the USD system shows that they are preparing for the future.

The biggest country in terms of economic power, as well as market size and production volume, is China. At the same it also became one of biggest gold owning countries on a global scale. Conservative estimates show that China owns 18,000 tons of physical Gold, while the official gold reserves of the Bank of China are reported to be only approx. 1,840 tons of Gold.

Russia and other central Asian countries are also building up their reserves, while Turkey is doing the same, while the Indian government is trying to make the purchase of gold as hard as possible for its citizens. 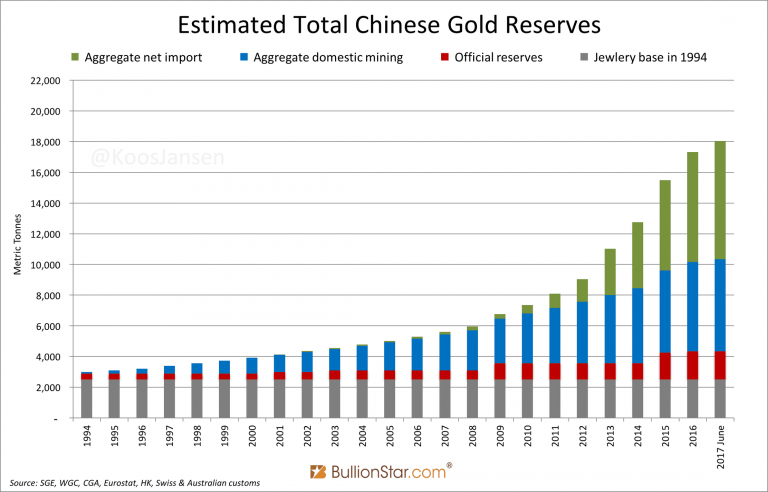 Slide provided by the best analyst of the Chinese gold market – Koos Jansen of  bullionstar.com. Total amount of gold estimated to be held in China (or rather, added to whatever existed previously since 1994). [PT]

The world is changing and let us not forget that the Soviet Union did not collapse because people suddenly changed their mind overnight. It failed only because of the inevitable realization that the centrally planned communist system was no longer sustainable.

You can only go into debt up to a certain level, however one fine day you will  either have to repay or default. When I look at global debt and its growth, I think it should be obvious that we have reached a level where repayment is no longer  an option. Also, this time “it is not different”.

That is why we saw dozens of hyperinflation episodes globally in the past century, which proved that governments can indeed go broke. We have reached a peak point of leverage and the day of reckoning is fast approaching. At the same time, a large part of the global population is apparently preparing for this day.

Keep in mind that in a deflationary environment, people will want to shift their investments to high quality assets with little or no counter-party risk. In short, it is a flight to quality and the hardest currency for the past few thousand years has be 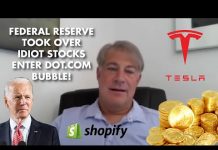