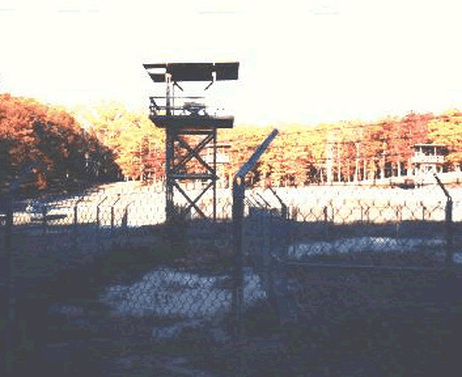 Camp Grayling, a known FEMA camp, was the site of massive training for the Michigan Army Reservists and the Michigan National Guard. They say they were training for GITMO duty during the Jade Helm 15 and 16 era. Anyone doubting the veracity of this claim should check their search engine for “FM 3-39.4” and make sure you are seated as you read this Army Field Manual. Jade Helm 15 and 16 was the rehearsal for the unconstitutional mass detention in times of martial law without due process. And now that process has been affirmed by the Supreme Court.

In the post-Jade Helm era, and just over five months ago, it was reported that Camp Grayling was now the site where robots are being trained to fire 50 caliber machine guns. This means that FEMA camps, at least in part, will be manned by robots!

This should be concerning to everyone, because it is clear that government is modernizing its FEMA camp facility with a specific purpose in mind.

This story is not just another FEMA camp analysis. This story is about the government giving itself the option of incarcerating American for any reason, or no reason, simply based on the “say-so” of those in charge. And now, all three branches of government are on board with this unconstitutional practice.

If true, is there a “smoking gun” document which proves the claim? There is not only a smoking gun document, there is a law that speaks to this matter very clearly. Further, there is a recent Supreme Court decision which affirms the government’s right to lock you up and throw away the key.

The Law That Obliterates Due Process

The passage of the National Defense Authorization Act (NDAA) marks the codification of unconstitutional indefinite detention based on the whim of the ruling authority. Even some of the ultra-liberals are afraid of this Hitler-style law. There are not many publications more liberal than the Huffington Post. However, they are concerned and this is what they have to say about the NDAA:

These NDAA provisions (which have been re-approved by Congress and signed by President Obama every year since 2012) override habeas corpus―the essence of our justice system. Habeas corpus is the vital legal procedure that prevents the government from detaining you indefinitely without showing just cause. When you challenge your detention by filing a writ of habeas corpus, you must be promptly brought before a judge or into court, where lawful grounds must be shown for your detention or you must be released.

Under Section 1021, however, anyone who has committed a “belligerent act,” can be detained indefinitely, without charges or trial, as a “suspected terrorist.” This is a direct violation of the U.S. Constitution and our Bill or Rights. In The Federalist No. 84, Alexander Hamilton stressed the importance of the writ of habeas corpus to protect against “the favorite and most formidable instruments of tyranny.”

Now the government can lock you up and throw away the key. I know that some will say that the Supreme Court would strike down this law if it were to be enforced. Well, as you will soon see, the Supreme Court just had an opportunity to do just that and they endorsed the practice as a result of their recent ruling in the Jennings v. Rodriguez case.

From Bad to Worse

As we have seen, even some of the liberals are frightened by the NDAA provisions for indefinite detention, by the subsequent realization that you can be locked away on the whim of the President with absolutely no due process rights. However, illegal immigrants cannot be locked away. At least they could not be prior to a recent Supreme Court decision. You simply will not believe this story.

Until recently, the courts have held the following, with regard to the indefinite detention of illegal aliens, as summarized by Cornell University Law School as recounted by the New York Times:

Courts have consistently held that anyone on United States soil is protected by the Constitution’s right to due process, even if they illegally entered the country, though people generally have greater legal protections inside the country than at the border.

How much process is deemed to be “due” depends on the situation. Courts have upheld that people who entered the United States illegally and were ordered deported have a right to appeal those decisions. But the courts have also essentially said that Congress can decide that more limited procedures are sufficient for noncitizens detained at the border.

My outrage, regarding the apparent two-tiered system of justice and Constitutional protections was summarized in the following. Illegal aliens do not deserve more legal protection from detention than US citizens when it comes to illegal detention.

However, this all changed as the Supreme Court recently ruled that immigration officials can indefinitely detain immigrants during subsequent immigration proceedings which are used to determine the legal status of an immigrant following arrest

In the 5-3 decision, in which Justice Elena Kagan abstained due to previous legal work which could have construed as a conflict of interest, the Supreme Court decision of Jennings v. Rodriguez affects both illegal and legal immigrants. This Supreme Court decision affirms the NDAA and the President’s right to detain anyone, for any reason as deemed necessary by some undefined principle. In other words, our due process rights are no longer guaranteed and exist at the whim of the President. The Supreme Court missed the opportunity to rule in favor of the Constitutional liberties as opposed to tyranny, and they did not.

I have no issue with illegal aliens being protected by the Constitution. When the government can determine whose rights to protect, then none of us are safe. However, and before the readers think I have gone “rogue liberal”, illegally crossing the border contains legal sanctions that are not being enforced (ie jail time). Illegal aliens, like US citizens, should not be immune to prosecution and the requirement to pay for their legal transgressions. Illegal aliens, despite what the sovereignty-destroying Democratic party says, cannot have it both ways. The law is clear, the Constitution should apply to everyone, but so should the consequences for law-breakers.

It should be clear by this point there are much bigger issues here than just the detention status of illegal aliens. American citizens are not safe. A rogue future President, say like a Hillary Clinton, could imprison people indefinitely without due process. People wonder why I seem to be so concerned with FEMA camps, I just told you the reason. And if the Executive Branch was not intent on giving itself the option to imprison those that disagree with them at some future date, then why train robots to shoot 50 caliber machine guns at a known FEMA camp facility? Why would the Supreme Court reverse lower court rulings which established that illegal aliens have Constitutional protections against indefinite detention? The Supreme Court ruling, without mentioning it, just affirmed the very alarming NDAA and the government’s right to detain you based on the whim of the leadership of the government. This is why I have gone from outrage at the lower court decisions to fear of my government with regard to the recent Supreme Court decision.