by William Stoecker, All News Pipeline: 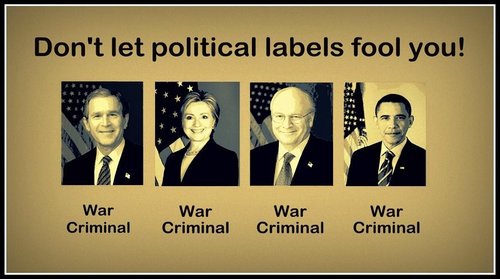 The United States (and the colonies that became the United States) has been at war throughout much of its history, which, depressingly, is fairly typical of many nations. Now, I am not advocating some sort of instinctive, knee-jerk pacifism…there are times when people must fight. For example, if patriots are attacked by a typically cowardly gang of leftist thugs they should give these pampered and privileged girlies and girly men something to howl about. But, time after time after time “our” government has dragged us into wars that could easily have been avoided and which had an appalling cost in blood and treasure. Those of us who have researched the matter have found evidence of the role of secret societies and what has been called “sacred numerology.”

The colonies fought the Indians practically non-stop, and fought several wars against the French, who were also interested in colonizing the New World. The last of these was called the French and Indian War, a description fitting all of them. We had scarcely finished that war, on behalf of our British colonial masters, when we effectively switched sides and joined with our former French enemies to win independence from George III’s England. The first shots of the American Revolution were fired on 4/19/1775 at Lexington Green and Concord Bridge in Marxachusetts. Interestingly, Hitler would be born 4/20/1889. And 4/19 and 4/20 were the dates of Waco, Oklahoma City, Columbine HS, and the Gulf oil disaster. Some people suspect that there is a 13 day period of Luciferian sacrifice extending from 4/19 through 4/30 (Walpurgisnacht, the Witch’s Sabbath, when Hitler supposedly killed himself) and 5/1…Mayday, or Beltane, sacred to the pagans and to Adam Weishaupt’s Illuminati. In fact, Weishaupt officially founded the Illuminati on 5/1/1776, and George Washington (himself a high level Freemason) warned us about this dangerous cult.

Our own Declaration of Independence was approved by the voice vote of the Continental Congress on 7/2/1776; it was sent to the printer’s and delegates began signing it 7/4/1776 (officially our nation’s birthday). Seven and four add up to 11, and the ratio of the height of the Great Pyramid in Egypt to any base side is seven to eleven. I would tend to discount this having any significance…but similar numbers keep popping up in history.

With a good deal of help from the French we won our independence, but by 1812 we had fought a brief and undeclared naval war against the French and then effectively joined Napoleon’s France when the British tried again to dominate us…and nearly did. Our major victory, the Battle of New Orleans, took place after the treaty had been signed, ending the war, but the internet was a bit slow back then.

And General Andrew Jackson, who had won the battle, became President and signed the Indian Removal Act so his real estate buddies could steal the land of the civilized tribes, as they were called, especially the Cherokee, hundreds of whom would die on the Trail of Tears leading to Indian Territory (Oklahoma).

Mexico handed us the perfect excuse to steal their northern territories (we did pay them a small amount). The Texas War for Independence ended in a treaty signed by Mexican dictator Santa Ana and clearly establishing the Rio Grande as the boundary between Mexico and the Republic of Texas, which then joined the US. Yet the Mexican military foolishly pretended that the Nueces River was the boundary and sent troops into the disputed area…which didn’t work out so well.

Meanwhile, issues like slavery, the tariffs, and state sovereignty versus an all-powerful Federal Government had kept tensions high between the North and South for many years. When Lincoln was elected as the first Republican President, the Southern States had had enough, and began seceding, starting with South Carolina. The sainted Lincoln, who violated the Constitution at every turn, might have tried harder to avoid violence…but he didn’t. South Carolina might have avoided giving him an excuse for war by firing on Ft. Sumter…but they didn’t. In fact, many researchers believe that the Illuminati, Masons, Carbonari, and other secret societies were rigging the war on both sides. Certainly it is hard to explain some Union defeats as mere incompetence…it is as if some Union generals were deliberately prolonging the war and making it bloodier.

Union General Joe Hooker, in what began as a brilliant move, crossed the Rapahannock with his Army of the Potomac upstream from Lee’s and Jackson’s Army of Northern Virginia and was in a good position to protect his own bridgehead while threatening Lee’s supply. But, inexplicably, Hooker suddenly withdrew into the wooded country around Chancellorsville, Virginia. Then Lee sent Jackson marching across Hooker’s front, inviting a devastating flank attack…but Hooker did nothing. Now Lee was to Hooker’s front and Jackson off somewhere to his right flank…and he refused to strengthen that flank, claiming that Jackson had obviously left the area. Why would he do that? And if Hooker believed that, why had he not attacked? He outnumbered the entire Army of Northern Virginia. Jackson and then Lee attacked, and Hooker withdrew to his bridgehead, which he could have defended for months while the recklessly aggressive Lee battered himself to death against it…but he withdrew across the river. And so it went for four terrible, bloody years.

Freemason warmonger Teddy Roosevelt was President William McKinley’s Assistant Secretary of the Navy and was on record as wanting war with Spain to take Cuba and the Philippines. So he sent the battleship Maine into Havana Harbor, where it exploded, and this was blamed on a Spanish mine, and we went to war. Later, it was revealed that the explosion was internal , and it was blamed on a coal bunker fire spreading to the ammunition magazine. Maybe so…but the Maine is the only US capital ship to explode “spontaneously.” 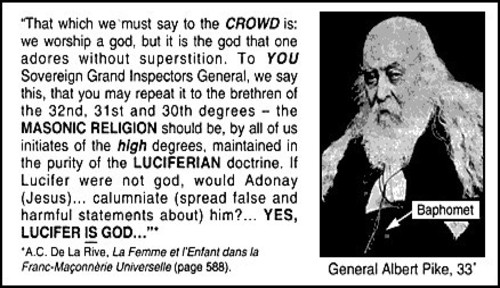 WWI began when Serbian terrorist Gavrilo Princip murdered Austrian Archduke Franz Josef…who, it was well known, was pro-Serbian. Princip and several other assassins worked for the mysterious secret society, the Black Hand, operating within the Serbian military. On 7/29/1914 (the individual digits add up to “33,” as in Thirty Third Degree Mason) Austria invaded Serbia, whereupon Russia, bound by treaty, declared war on Austria, whereupon Germany, tied by treaty to Austria, declared war on Russia. Then, since France had a treaty with Russia and also wanted Alsace-Lorraine back, Germany decided to attack France to prevent France attacking Germany. Needing a wider invasion front, Germany also invaded Belgium, bringing Britain into the war. None of the various military geniuses had done the simple calculations that would have shown clearly that huge conscript armies, machine guns, bolt action rifles, and masses of fast-firing artillery meant that war now favored the defensive. Maybe, as we are still in NATO, the US should question the idea that treaties provide “security.”

Blockaded by the powerful Royal Navy of England, Germany finally resorted to unrestricted submarine warfare. On 5/7/15 the British liner Lusitania sailed from NYC for the UK, secretly carrying (as the world discovered years later) munitions, making it a legitimate target. Germany warned Americans not to travel on it, but they did anyway, and as it entered the war zone near Ireland, in an areawhere a German U-boat had recently been spotted, its British naval escort was, incredibly, withdrawn. The German U-boat sank the liner, with many civilian deaths, which the Germans hadn’t expected, given daylight, mild weather, calm seas, and the proximity to the Irish coast. Churchill, then in the Admiralty, probably played a sinister role in this. But even now President Woody Wilson could not convince the American people to support going to war. In 1917 British Intelligence intercepted German’s diplomatic Zimmerman Telegram to the government of Mexico and provided a copy to Wilson’s regime. In it, the Germans promised to help Mexico regain her lost territories if they aided Germany if Germany and the US had gone to war. That last little qualifier was simply ignored by Wilson and by the (even then) mostly controlled media, and the US entered WWI on the side of England and France. The cease fire ending the Great War was on 11/11/1918 (now veteran’s day) at 11 AM. Note that the three elevens add up to 33, again, as in thirty third degree Freemason.

As to our involvement in WWII, most people todays do not realize that prior to Pearl Harbor we were aiding Britain in an undeclared naval war against Germany. We also began aiding China against very real Japanese aggression. But in 1941 FDR decided to move the bulk of our Pacific Fleet from safe San Diego to Pearl Harbor in Hawaii, where it was vulnerable to attack. Admiral James O. Richardson protested this, so FDR fired him. Then we hit Japan with an oil embargo forcing them to collapse economically, kowtow to us and get out of China…or do a sudden, surprise attack, like they had done to Russia in 1905. Then the Japanese fleet vanished…we had no idea where it was, but it should have been obvious, along with its ETA in Hawaiian waters. Entire books have been written showing the circumstantial but massive evidence that FDR betrayed us at Pearl Harbor. As to the nobility of our cause in WWII, remember that our government allowed Rockefeller’s Standard Oil to continue selling to the Axis Powers via neutral countries like Spain.

WWI was going to make the world “safe for democracy,” but really made it safe for fascism…in Russia and Japan, then Italy, and finally in Germany. WWII was supposedly to defeat fascism, but led to the expansion of its Soviet variant. And we invited Russia in to help us defeat Japan, allowing the communists to occupy northern Korea and Manchuria, setting up the North Korean dictatorship and aiding the Chinese communists. The Russians provided the Chinese Communists with captured Japanese weapons while President Truman and General George Marshall limited aid to the Chinese Nationalists, resulting in the takeover by Mao. And for this we fought WWII? In South Korea we refused to arm the government even with the purely defensive weapons we possessed in great abundance at the end of WWII…things like P-51 fighters, heavy, towed artillery, and anti-aircraft and anti-tank guns. The result was the bloody and unnecessary Korean War. 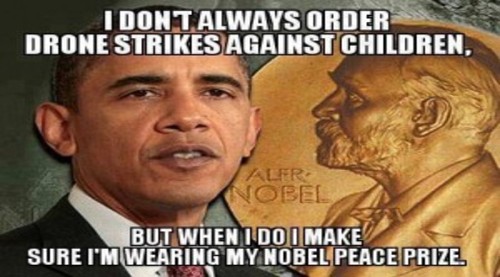 Most people are aware of the staged naval incident in the Gulf of Tonkin, which leftist LBJ used as the excuse to get us into the Vietnam War, which he resolutely refused either to end or to win. You might think that after all that we would have learned something…but no, the American Sheeple have continued to trust an elite class and a government who always lie, and have willingly sacrificed themselves in one war after another.

People often forget Reagan’s ill-advised and pointless incursion into Lebanon, 1982-84, and the slaughter at our Embassy and at the Marine Barracks. And let’s not forget Grenada, Panama, Somalia in 1992-93 and the loss of our Blackhawk and so many good men with no clear purpose to it all. In Bosnia 9/95 we aided the Muslims, who were allies with Iran and involved in drug trafficking, and we bombed Christian Serbia in 4/99. We have fought the First and Second Gulf Wars and appear to have a few troops still bogged down in Syria, where we are doing…what?