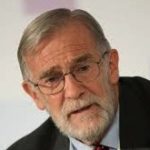 If FBI agent Peter Strzok were not so glib, it would have been easier to feel some sympathy for him during his tough grilling at the House oversight hearing on Thursday, even though his wounds are self-inflicted. The wounds, of course, ooze from the content of his own text message exchange with his lover and alleged co-conspirator, Lisa Page.

Strzok was a top FBI counterintelligence official and Page an attorney working for then-FBI Deputy Director Andrew McCabe. The Attorney General fired McCabe in March and DOJ has criminally referred McCabe to federal prosecutors for lying to Justice Department investigators.

On Thursday members of the House Judiciary and Oversight/Government Reform Committees questioned Strzok for eight hours on how he led the investigations of Hillary Clinton’s unauthorized emails and Donald Trump’s campaign’s ties with Russia, if any.

Strzok did his best to be sincerely slick.  Even so, he seemed to feel beleaguered — even ambushed — by the questions of Republicans using his own words against him. “Disingenuous” is the word a Republican Congresswoman used to describe his performance.  Nonetheless, he won consistent plaudits from the Democrats. He showed zero regret for the predicament he put himself into, except for regret at his royal screw-up in thinking he and Lisa could “talk about Hillary” (see below) on their FBI cellphones and no one would ever know.  One wag has suggested that Strzok may have been surreptitiously texting, when he should have been listening to the briefing on “Cellphone Security 101.”

In any case, the chickens have now come home to roost.  Most of those chickens, and Strzok’s predicament in general, are demonstrably the result of his own incompetence.  Indeed, Strzok seems the very embodiment of the “Peter Principle.” FBI agents down the line — that is, the non-peter-principle people — are painfully aware of this, and resent the discredit that Strzok and his bosses have brought on the Bureau.  Many are reportedly lining up to testify against what has been going on at the top.

It is always necessary at this point to note that the heads of the FBI, CIA, NSA and even the Department of Justice were operating, as former FBI Director James Comey later put it, in an environment “where Hillary Clinton was going to beat Donald Trump.”  Most of them expected to be able to stay in their key positions and were confident they would receive plaudits — not indictments — for the liberties that they, the most senior U.S. law enforcement officials, took with the law.  In other words, once the reality that Mrs. Clinton was seen by virtually everyone to be a shoo-in is taken into account, the mind boggles a lot less. 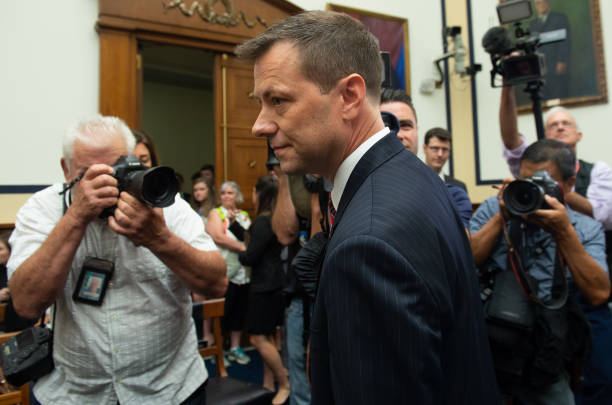 Strzok arrives to testify on FBI and DOJ actions during the 2016 Presidential election during House Joint committee hearing on Capitol Hill on Thursday. (Getty)

In a text sent to Page on April 2, 2016, Strzok assured her that it was safe to use official cellphones.  Page: “So look, you say we text on that phone when we talk about Hillary because it can’t be traced.” It goes downhill from there for the star-crossed lovers.

Pity Page, who asked for more time to answer a subpoena to testify to the same joint-committee. It is understandable that she would have trusted Strzok onthis.After all, he was not only her lover, but also one of the FBI’s top counterintelligence officials.

How could she ever have expected to taste the bitter irony that the above text exchange could be retrieved, find its way to the Department of Justice Inspector General, to Congress, and then to the rest of us, not to mention far more incriminating exchanges.

There were moments of high irony at Thursday’s hearing.  For example, under questioning by Darrell Issa (R-CA), Strzok appealed, in essence, for the same kid-gloves treatment that his FBI and DOJ associates afforded Mrs. Clinton during the Strzok-led investigation of her emails.

Issa: And in that investigation, uh, you were part of the decision for her to, uh, and her lawyers, to go through emails that were produced during, uh, you, if you will, during her time as Secretary, go through and determine which ones were Government, and which ones were not, both the classified and unclassified, is that correct?

Strzok: I was not.

Issa:   You were not involved at all.

Issa: But you’re aware of it.

Strzok: I..I’m aware of their statements to us about how they did it.

Issa: And do you think it was ok, uh, for Secretary Clinton to determine what could or couldn’t, uh, uh, qualify for her to turn in under the Federal Records Act?

Strzok: I, I can’t speak to that.  That was a decision, my understanding between her and her attorneys, and…

Issa:   Ok, but you were aware that in her production she failed to deliver some items that’ve now been ruled were classified, is that correct?

Strzok: I’m aware that we recovered information that was not in the material that she turned over.  I don’t know if it was her failure, the failure of the attorneys conducting that sort, or simply because she didn’t have it. I, I don’t know the answer to that question.

Issa: So, I bring up something that came up in the previous round.  So far, only you have determined what should be turned over from your private emails, that, or your non-government emails and texts, what should be delivered because it was government in nature. You’ve made that decision.

Issa: And it’s your position that nobody else in the way of a government entity should be able to look over your shoulder, so to speak, and make that decision.

Issa: So you think it’s ok for the target — and you are a target — of an investigation to determine what should be delivered rather than, if you will, the government, right?

At this point Issa tells Strzok he is indeed a target of investigation by Congress.  More importantly, Issa makes the point that the content of the texts exchanged on the FBI phones contained a mixture of official business and personal matters.

So why, asks Issa, should we not ask you to provide similar texts from your personal exchanges, since there is likely to be a similar mixture of official and personal matters in those texts? Issa suggests they likely “would be similar.”

Strzok asks if, by “similar,” Issa means “commenting on Mr. Trump or Hillary Clinton or anything else political in nature.”  Strzok then adds, “I don’t specifically recall but it is probably a safe assumption.” 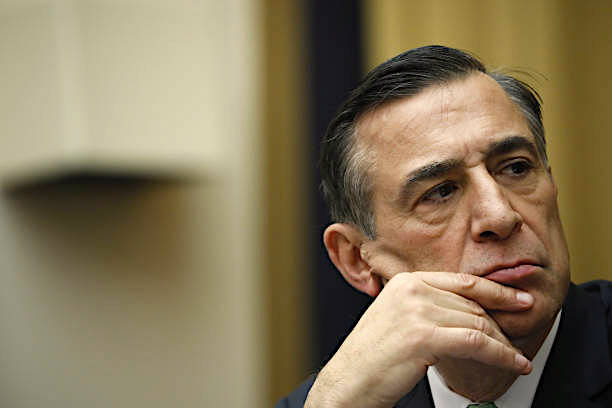 If Strzok was distracted by texting during the standard briefing on “NSA Capabilities:101,” he may have missed the part about NSA collecting and storing everything that goes over the Internet.  That would include, of course, his private text messages with Page on private phones.

There is, admittedly, a very slim chance Strzok is unaware of this.  But, given his naiveté about how well protected the texts on his FBI cellphone were, that possibility cannot be ruled out.  In any case, given the high stakes involved, there seems a chance he might be tempted to follow Mrs. Clinton’s example with her emails and try to delete or destroy texts that provide additional incriminating evidence — or get someone else to do so.

More probably, after Thursday’s hearing, Strzok will see it as too late for him to try to cash in on the “Hillary Exemption.”  Strzok, after all, is not Hillary Clinton.  In addition, it has probably long since dawned on him that his FBI and DOJ co-conspirators may well decide to “throw him under the bus,” one of those delicate expressions we use in Washington.  In this connection, Strzok will have noted that last month McCabe asked the Senate Judiciary Committee to give him immunity from prosecution in return for his testimony on how senior officials at the FBI and Justice Department handled the investigation of Mrs. Clinton’s private email server.

If McCabe knows FBI history, he is aware that one of his predecessors as acting director, L. Patrick Gray, famously was left to “twist slowly in the wind” per the instructions of President Richard Nixon’s aide John Ehrlichman, when the Senate Judiciary Committee could not get satisfactory answers from Gray.

Nixon had nominated Gray to lead the FBI after J. Edgar Hoover died in May 1972, but he could never get confirmed by the Senate.  Worse still, Gray was forced to resign after less than a year as acting FBI director, after he admitted to having destroyed Watergate-related documents.

The “mainstream media” remain the main obstacle to understanding what is going on behind the scenes.  It would be easier to forgive them, were not a full-blown Constitutional crisis brewing between the Executive and Legislature branches, as the DOJ and FBI continue to resist Congress’s requests for original documents. Former CIA chief John Brennan is also being given space to indulge in pre-emptive rhetoric that he apparently thinks will help when they get to him.

The New York Times reported Friday that “Peter Strzok … was hauled before the House but came out swinging. … The embattled F.B.I. agent who oversaw the opening of the Russia investigation mounted an aggressive defense of himself and the F.B.I. on Thursday, rejecting accusations that he let his private political views bias his official actions and labeling Republicans’ preoccupation with him ‘another victory notch in Putin’s belt.’”

The Potomac Times (aka The Washington Post) ran similarly laudatory coverage of Strzok — “Strzok testifies amid partisan fury: heated hearing sheds little light as agent fumes at accusations of FBI bias” — and laced its coverage with a defamatory article about Rep. Jim Jordan (R-OH), who led the most aggressive Republican questioning of Strzok.