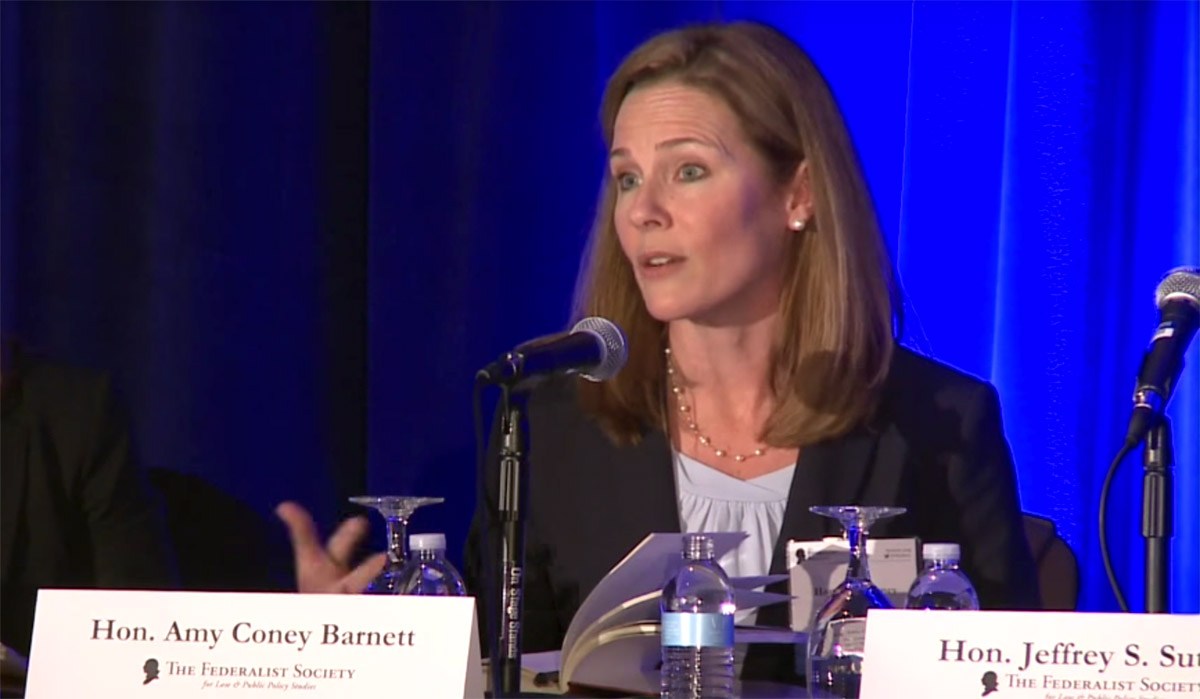 There is a lot of buzz that Amy Coney Barrett is going to be President Trump’s nominee for the Supreme Court, and that is causing many progressives to totally freak out. The reason that they are freaking out doesn’t have anything to do with her credentials. In fact, as you will see below, Barrett is exceptionally qualified to be on the Supreme Court. She is sharp, intelligent and has a sterling reputation. But the left is already throwing a massive temper tantrum even though she isn’t the nominee yet for one very simple reason. Amy Coney Barrett is a committed Christian, and progressives are deathly afraid that her Christian values will influence her decisions on social issues.

We all know that President Trump likes to make history, and it is being reported that nominating the first conservative woman to the Supreme Court is something that “intrigues” him. The following comes from CNN’s Jeff Zeleny…

“President Trump is increasingly intrigued about selecting the first female conservative Supreme Court justice, people familiar with the search say, repeatedly telling advisers that he likes the idea of making such a historic choice in a climate where women on the other side of the political aisle are playing such a pivotal role. …’Can you imagine?’ the president said with a smile during a conversation about the prospect of selecting a woman for the pivotal spot on the court.”

Barrett is the mother of seven children, and she is still only in her mid-40s.

So if she ends up on the Supreme Court, it is conceivable that she could be there for 30 or 40 years, and that is a nightmare scenario for progressives.

For decades, the left has been using the courts as their primary weapon to advance their agenda in the culture war. Now there is a very real possibility that control of the Supreme Court may slip firmly into conservative hands, and that prospect absolutely terrifies them. And so the fact that Barrett is an extremely committed Christian is a non-starter for progressives even though she is immensely qualified for the job otherwise. The following comes from the National Review…

The alarm isn’t about her credentials. She’s checked every box of excellence — law review, appellate-court clerkship, Supreme Court clerkship (with Justice Scalia), elite law-firm experience, law professor at an elite law school, and now experience as a federal judge on the Seventh Circuit Court of Appeals. She’s a young, brilliant woman at the apex of her profession.

You would think that progressives would love the thought of another woman on the Supreme Court.

But of course they only want a woman if that woman agrees with their agenda, and Barrett most definitely does not.

So in the end, the debate about whether or not Barrett belongs on the Supreme Court is going to come down to her faith…

It turns out that she’s a faithful Christian who lives a Christian life very similar to the lives of millions upon millions of her fellow American believers.

No, really, that’s the objection.

Of course there was the infamous moment during Judge Barrett’s 2017 confirmation hearing for the Seventh Circuit Court of Appeals when Senator Dianne Feinstein imposed an obvious religious test on her nomination. “When you read your speeches,” Feinstein said, “the conclusion one draws is that the dogma lives loudly within you. And that’s of concern when you come to big issues that large numbers of people have fought for, for years in this country.”

For both the left and the right, the abortion issue is always front and center when it comes to the Supreme Court.

Many of us on the right dream of a day when Roe v. Wade will finally be overturned, and many on the left are extremely determined to keep that from ever happening.

Unfortunately for those of us that are pro-life, most Americans still very much embrace Roe v. Wade. In fact, a brand new poll that was just released found that 63 percent of all Americans agree with the Roe v. Wade decision and only 31 percent disagree with it…

Voters overwhelmingly agree with the Supreme Court decision on Roe v. Wade, according to a Quinnipiac University poll released Monday.

More than 6 in 10 voters — 63% — agree with the landmark Supreme Court decision on abortion, while 31% disagree. There’s a surprisingly small gender divide on the issue, with women agreeing on the decision at 65% and men just four points behind.

Republican voters are the only group in which a majority disagree with the decision — by a margin of 58% to 36%.

Ultimately, these are the numbers that must change if we ever want to end abortion in America.

There may be a handful of red states that attempt to outlaw it, but any state legislation that gets passed would immediately be tied up in the court system for years.

But without a doubt we should be attempting to overturn Roe v. Wade, because that would be a significant step in the right direction. Getting Amy Coney Barrett on to the Court would be a real plus, and despite everything that I have written so far, there is reason to believe that she could be confirmed.

After all, when she was nominated for the 7th Circuit Court of Appeals back in 2017 she received 55 votes in the Senate…

That doesn’t mean, however, that picking Coney Barrett would be without some strategic side benefits. The largest of those is the fact that she was confirmed by the Senate to the 7th Circuit Court of Appeals in October 2017. She received 55 votes, including from Democrats Joe Manchin (West Virginia), Joe Donnelly (Indiana) and Tim Kaine (Virginia) as well as several moderate Republicans like Shelley Moore Capito (West Virginia), Susan Collins (Maine) and Lisa Murkowski (Alaska).