Facing these rideshare startups are, after decades of consolidation, three rental-car companies that now control 95% of the $28.6-billion-a year US rental car market, each with a number of national brands.

The total rental-car fleet in the US (all operators, including independents) dropped 5% year-over-year to 2.19 million vehicles in 2017, as right-sizing fleets has become a big theme. According to estimates of Auto Rental News, total revenues in 2017 were essentially flat with 2016.

While there are segments within the rental-car business that are doing well, there is one segment where rideshare companies are eating their lunch: reimbursed ground transportation.

And Rideshare companies are totally wiping out the market share of taxis within the reimbursed ground transportation segment.

These trends show up in the data from Certify, a provider of online travel and expense management for companies, based on its analysis of over 10 million business travel receipts and expenses.

Of the three ground transportation segments for business expense reimbursement – rideshare, rental cars, and taxis – the share of Uber and Lyft combined reached 72.5% share in the second quarter, according to Certify. That’s up from 0% not too long ago!

In Q1 2014, when Certify started tracking rideshare reimbursements, their combined share was 8% (almost all Uber). 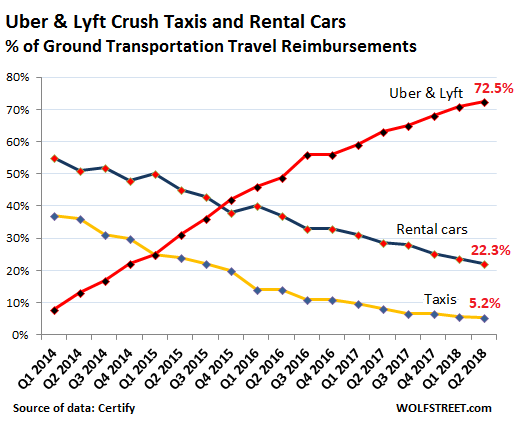 Rideshare companies have a huge competitive advantage: They’re losing enormous amounts of money, and their investors like it that way and reward them – or rather themselves – with lavish valuations. In fact, investors are eager for feed them more billions to burn through, and thus they eagerly subsidize each ride.

Rideshare companies also have the advantage in many jurisdictions of not being regulated as taxi enterprises, and thus are able to dodge some expenses and rules.

But most importantly, rideshare companies are offering a service that riders appreciate and value. This came about as the staid taxi industry slept through the arrival of smartphones – and what an app-based system could do. While there are now apps for taxi services, it’s too little too late.

In terms of competing with rental cars in the reimbursed ground transportation segment: it’s logical. When you get off a plane in a city you don’t know, nothing beats skipping the rental car counter and getting picked up by chauffeurs that are at your beck and call, day and night, for the entire five days of your stay. And the company willingly pays for it all. This is a no-brainer for many business travelers – see above chart.

But within the rideshare universe of reimbursed ground transportation, it’s a raging battle for market share between Uber and Lyft. Uber was first and had the small pieces it was carving out from rental cars and taxis all to itself initially. Then Lyft came along and gradually started eating into Uber’s market share. But both were taking share away from taxis and rental cars at an astounding pace, and Uber’s loss of market share to Lyft was no big deal. 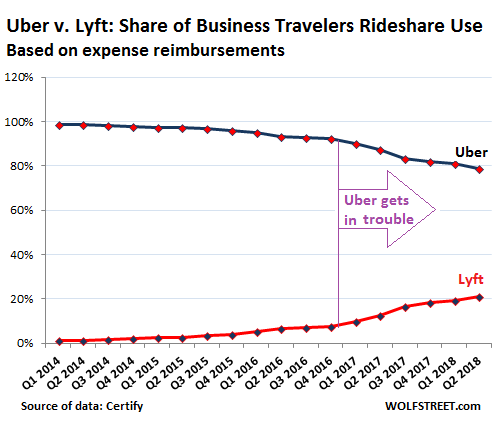 While Uber is losing share to Lyft within the rideshare segment, business travelers are spending more money per trip with Uber than with Lyft, according to Certify. In Q2 2018, on average per ride: