by Kevin Gosztola, The Anti Media: 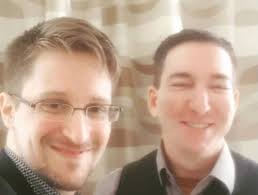 Journalist Glenn Greenwald traveled to Moscow for a panel discussion on “fake news.” A clip of comments he made to an RT crew afterward was shared widely. He also visited NSA whistleblower Edward Snowden, and for all of the above, he was viciously attacked by MSNBC intelligence analyst Malcolm Nance, who has a massive following on Twitter, and others.

Greenwald wrote an article at The Intercept on what unfolded. Specifically, he highlighted how Nance’s statement that he showed his “true colors as an agent of [Donald] Trump and Moscow” was uttered as if it is a fact.

Nance “informed” his 423,000 followers that he “helped Snowden defect, covers for WikiLeaks’ attack on democracy, and shills for Fox News” because he is deep in the pocket of the Kremlin.

The crucial point Greenwald made was that MSNBC actively encourages “its on-air personalities to lie and smear critics” of the Democratic Party. That includes rewarding individuals who fabricate allegations that critics, “including journalists are treasonous agents of a foreign power.”

MSNBC personalities and enthusiastic viewers may scoff at this argument, but multiple individuals who work for or have appeared several times on the cable news network proved his point.

Naveed Jamali, a former FBI operative and analyst for MSNBC, is the author of “How To Catch A Russian Spy: The True Story Of An American Civilian Turned Double Agent.” It recounts his work as a double agent for the FBI in a modern-day Cold War.

As Nance was criticized for fabricating allegations, Jamali stepped in to defend Nance. “This is nothing more than a smear job by a man responsible for aiding a thief [giving] our most sensitive secrets to Russia.”

During an exchange with Aaron Maté, host and producer for The Real News, Jamali replied, “If the Kremlin shoe fits…then yes Glenn Greenwald is a Kremlin agent,” and, “I think Snowden, with the help of Glenn, have deeply harmed [the] national security of this country and have aided Moscow beyond Russia’s wildest dreams.”

This smear, as with Nance, was stated as fact without any effort whatsoever to provide evidence for the allegation, and it was lent credibility by the fact that Jamali is a former FBI operative, who currently works for the U.S. Defense Department and provides regular commentary as an expert on MSNBC.

Andrew Feinberg, a White House correspondent for Breakfast Media, has appeared on MSNBC. He was on “The Last Word” after he told Trump in an interview that he was lying about collusion with Russia.

“Silly Glenn, it’s not that you’re on [Vladimir] Putin’s payroll, it’s just very curious that you never, ever criticize him or his errand boy [Julian] Assange,” Feinberg suggested. “You always take the Kremlin tack of all whataboutism all the time & attack anyone who might be a Democratic hopeful for not being pure enough.”

Presumably, Feinberg would like to appear on MSNBC more regularly, and his assertion that adversarial journalism of the Democratic Party constitutes evidence that Greenwald is under the influence of the Kremlin may be all Feinberg needs to earn another invitation.

Another person who has appeared on MSNBC, Jelani Cobb, added, “Glenn, you sound like a Stalinist, pre-1956.” All because Greenwald described the attacks as “McCarthyite paranoia and jingoism” that were an example of “sick and toxic” discourse in U.S. politics.

Neera Tanden, director of the Center For American Progress (CAP) who was an adviser for Hillary Clinton’s 2016 presidential campaign, took note of Greenwald’s comment that he came to Russia to combat toxic views of the country in the United States.

She has appeared multiple times on MSNBC, and although she was insinuating Greenwald is some kind of shill for the Kremlin, it will only endear her to producers at MSNBC. This fits the narrative they want promoted on television.

Greenwald’s visit with Snowden fell on a kind of anniversary. About five years ago, he had his passport revoked by the United States and was stranded in a Moscow airport, where he sought asylum from Russia.

In a comment on a photo Greenwald shared, he shared how excited he was to reunite with Snowden. This could have provided a peg for coverage in the U.S. media, a valuable opportunity to reflect on Snowden’s well-being, the benefit of his disclosures to the public, and how he is still charged with violating the Espionage Act. But rather than that, various commentators previously given a platform by MSNBC chose to vilify Greenwald.

According to Greenwald, the panel he participated in was on “fake news” and included Alexei Venediktov, who is “famous in Russia as a fierce critic of the Putin government in his position as editor-in-chief of Ekcho Moskvy radio station, along with Giovanni Zagni, head of an Italian website dedicated to checking politicians’ statements who is working with Facebook to determine ‘fake news.’”

Well aware of the baseless smears against former Green Party presidential candidate Jill Stein, Greenwald made it clear that The Intercept paid for his travel, and he was paid “no fee for the trip.”

“The panel was moderated by RT Editor-in-Chief Margarita Simonyan and also included Sergey Nalobin, acting deputy director of the Information and Press Department of the Russian Ministry of Foreign Affairs,” Greenwald noted. It featured criticisms of both Russia and the United States governments.

MSNBC did not suddenly become a hub for anyone wanting to pontificate about who is and is not a Russian spy without any proof whatsoever. Host Joy Ann-Reid is a prime example of someone who has engaged in this behavior regularly since Snowden was granted asylum. She even referred to Snowden’s supporters as “Putin-tilting Snowdenistas.”

When Melissa Harris-Perry hosted a weekend show, she stated, “Snowden reportedly has more information with him. U.S. state secrets that he says are even more significant than what he`s already released, that Russia and China authorities will be more than happy to get their hands on, if they haven’t already, and if he wasn’t intending to spy on the U.S. for foreign governments — well, he’s as good as doing it now.”

Much of the opposition likely stems from the widely held belief among liberal Democrats that someone holding a security clearance should not release classified information without authorization.

Karen Finney, a former MSNBC host and member of the Clinton administration, expressed this sentiment when she appeared on the network in June 2013.

“When I worked in the Clinton administration, I had a top secret clearance. I took that as sacred. It bothers me. I’m very uncomfortable that this 29-year-old kid decided that it was okay to put this information out there,” Finney stated.