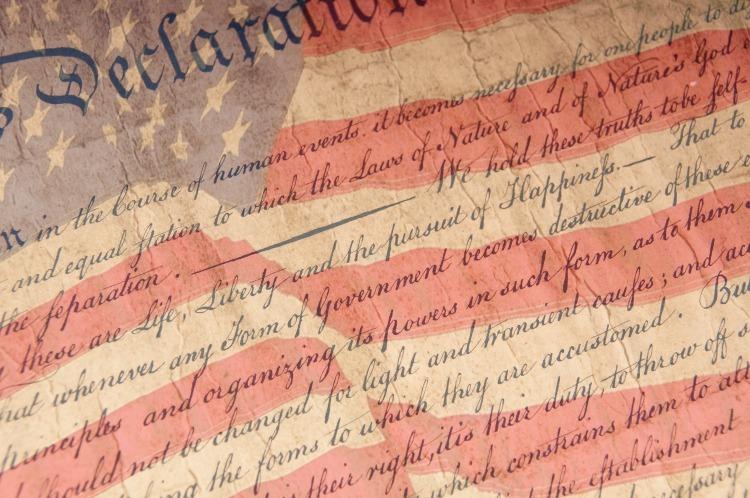 A couple of centuries ago, our country’s Founding Fathers wrote and signed a declaration of our independence from another country. They included a bill of the rights that they wished to ensure for their descendants. While not perfect people, by any means, they tried to create a nation of liberty that would go on for centuries to come.

What people seem to be missing is that the Bill of Rights isn’t a list of “privileges” granted to us by gray-haired rich men in the 1700s. We are endowed with natural human rights from the moment we are born.  We also bear the responsibility to protect our independence from those who would subjugate us.

Fast forward to our current day. Human ingenuity has come so far in many ways, but at the same time, many have lost that spark of liberty, that sense of compassion, and that pride that urges us to achieve even greater things. There are so many people in our country who are just ready to turn over all control of their lives and wait for a handout.

Our education system has had a great hand in this. These days, many educators are more likely to wax poetic over the joys of socialism than to tempt students to greatness with the benefits of capitalism. And decades of indoctrination is beginning to overcome centuries of liberty-minded ideals.

Lately, the 4th of July simply makes me sad.

I was trying to summon up a rush of pride to write about what makes our country great, and all I could think about was how far we’ve sunk. How distant we’ve ventured from those original settlers who said, “No more!” and declared their independence. They fought and sacrificed to be free of a government that oppressed them, taxed them, stole from them, and enforced rules without any type of representation upon them.

We have somehow forgotten what freedom really means and so we have lost it, incrementally and for many people, voluntarily.

Here we stand today, on July 4, 2018, with a government that has systematically crushed the rights that were demanded more than 240 years ago when the founding fathers signed the Declaration of Independence. And I’m not just talking about the current administration. This stuff has been going on for decades, if not longer.

And yet, people comply. They truly believe that this is what freedom looks like. When they lose freedoms they comfort themselves with, “This is the price we pay to live somewhere safe and civilized.”

Every time a bad act occurs, people plead to give away even more of their freedom because they believe it will make them safer.  They are willing to be fondled and naked-body-scanned by the TSA in order to board a plane. They want to make a phone call and wait for the police to save them instead of picking up their own firearm and refusing to be a victim. They want to be surrounded by gun free zones, rainbows, and armed guards instead of taking responsibility for their own safety.

Somehow, this land of rugged individuals has become populated with scared children, who expect to be cared for, fed, protected, and made to feel good about themselves, all by government mandate. Many people seem to have no desire whatsoever to earn their keep, provide for their families, or take responsibility for their own safety. They expect the workplace to be one of sunshine and lollipops, with ample time off, equal pay for all, and. don’t forget, lots of kind words for everyone.

Our culture is just so incredibly dependent.

Freedom is terrifying to most people because it means that they and they alone, are responsible for the actions that they take. An independent person succeeds or fails on his or her own merit. Independence by its very nature means that the possibility of failure exists. It requires a sense of adventure, confidence, and the ability to fail and get right back up again, and it seems like these things are being bred right out of the American people.

“Independent”, by definition, is the opposite of dependent. Here’s a whole list of definitions:

1. not influenced or controlled by others in matters of opinion, conduct, etc.; thinking or acting for oneself.
2. not subject to another’s authority or jurisdiction; autonomous; free
3. not influenced by the thought or action of others.
4. not dependent; not depending or contingent upon something else for existence, operation, etc.
5. not relying on another or others for aid or support.
6. rejecting others’ aid or support; refusing to be under obligation to others.
7. possessing a competency.

So, if you are, at heart, a free person, the above is a description of your character.

Maybe you read that list and realized it doesn’t describe you. With some hard work and a big dose of courage, it can. Here’s how:

You must reduce your dependence on everything that is out of your control.

You must reduce your dependence on the government, the large corporations, the transportation system, money, the banking system, entities like the FDA and the USDA. All of these are marketed to us to make it seem like we can’t survive without them.

Those who signed the Declaration of Independence, hundreds of years ago, knew this was the case. When Britain tried to coerce them and convince them that they needed help and governance from the other side of the ocean, those patriots decided that there was not one single thing that England could provide for them that they needed enough to remain under the rule of the King. (Here’s how high the cost of freedom was for some of those men.)

Once you decide that there’s nothing that you need, then the boogeymen who would control us all lose their power. That’s why nearly everything you need to do to become self-sustaining is either illegal or strongly discouraged: milk straight from the cow, water collection, front-yard vegetable gardens, carrying a firearm.  They need you to need them.

“Government” is a giant scam.

The government is not really made up of the elected officials that it purports. It’s made up, mostly, of people who sell their souls to huge corporations that have an interest in beneficial laws being passed and laws that would harm their businesses shut down before they ever reach the desk of the presidents.

As well, the supposed watchdog entities, like the Food and Drug Administration, the Environmental Protection Agency, and the United States Department of Agriculture are also populated by those who have been hand-picked to support corporations, no matter what the detriment to the American people whom they pretend to protect. If Congress was like Nascar, the members would have to wear uniforms emblazoned with their sponsors. However, Washington DC does not have the transparency of professional car racing, so we must guess at the sponsors of our members.

We are buried under ridiculous laws with the sole purpose of generating revenue or adding to the slave labor force in the for-profit prison system. We must work most of our waking hours to be able to pay for our basic necessities. We are convinced repeatedly that we must have things that our ancestors would never have considered owning, much less requiring.

They have most people convinced that they must follow the food pyramid, the vaccine schedule, and the rules that force us to have licenses for every darned thing we do. We must pay for and be granted permission to feed ourselves, transport ourselves, build shelters for ourselves, unite in matrimony, and even to own pets.