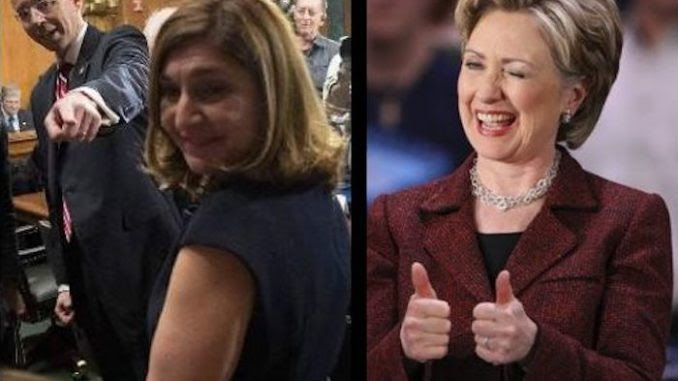 Do you remember the popular movie starring Tom Cruise called The Firm? I believe that I have stumbled upon a real live example of The Firm and it is operating within the confines of the Department of Justice where Assistant Attorney General, Rod Rosenstein is running interference for the Deep State interests who seek to bring this country down.

A quick review of the movie, The Firm, will illustrate, in part, what I have discovered hiding in plain sight.

In the movie, the main character, Mitch McDeer (Tom Cruise) is a young man from a poor Southern family who has struggled through Harvard Law School to graduate fifth in his class.

After graduation, Mitch was entertaining offers from major firms in New York and Chicago, but then a Memphis-based Bendini, Lambert, & Locke offer McDeer a salary that was 20% higher salary than the best offer he had received to this point along with a variety of perks and fringe benefits, he decides to sign on and remain in the South.

Mitch’s wife, Abby (Jeanne Tripplehorn), warns him that the deal is too good to be true. McDeer does discover, after several weeks of working with Avery Tolar (Gene Hackman) that Mitch discovers that the vast majority of BL&L’s business is tied to organized crime, with crime boss Joey Morolto (Paul Sorvino) using the firm to launder Mafia money. in short, the Firm was not what it appeared to be and neither is the Department of Justice. The DOJ, as I am discovering, solely exists for the purpose of providing cover for the globalist crime syndicate, we call the New World Order, and their uncompromising efforts to bring down this country in order to establish a criminal state, devoid of the rule of law which is based upon satanism, fascism and globalism.

Rosenstein Is a Deep State Operative

In recent Congressional hearings, Trey Gowdy told Assistant Attorney General, Rod Rosenstein to either answer his questions or go to jail. Rosenstein continued to mock Gowdy and the entire proceedings. Why? Because Rosenstein is protected by the Deep State.

Heretofore, we have only identified the surface elements of the Deep State such as Rosenstein, the Clintons, Wasserman Schultz et al. However, I have stumbled upon a major piece of the Deep State apparatus and it is the quality control portion of this criminal organization.

I recently did a video on Rod Rosenstein’s wife, US Attorney Lisa Barsoomian. She is the one Deep State element that I have discovered whose access does not appear to be compartmentalized or restricted. As a result of her legal work, Barsoomian touches many aspects of the Deep State and she is the one I would choose to interview about the Deep State because she would know so much. My first brush with Barsoomian was superficial and I did not fully appreciate this woman’s power until I dug deeper. Many of the followers of The Common Sense Show dug deeper as well including a lady named Alexandra who wrote me several detailed emails. And she discovered what I already knew, now that we are on to Barsoomian, the Internet (ie open source intelligence), the information on Rosenstein’s wife is evaporating faster than water does on a 120 degree day in the desert . Here is an excerpt from Alexandra, which is typical of 6 other emails I have received in the past 24 hours.

…just heard your video on Rosenstein’s wife. You mentioned things were being scrubbed – indeed! Finding things on her is not such an easy task. But…
I did do a little scouring around in some random places and found a few things…
I have a few articles and links and even twitter links with information on her, and at least one or two pdf file links that I will be sending – in hopes that it gives you more information and direction…
I am trying to send these quickly to you, as there are already 3 or 4 links that have already gone poof, so I am trying to get the articles or info into an email to you, so if the link does not work? You will have the info and the link/person/people that it came from. I am not sure how many I will be able to get to you, but I am trying.This nasty swamp keeps coming up with new creatures.

Sometimes, the best clues are the ones hiding in plain sight as evidenced by this tweet. 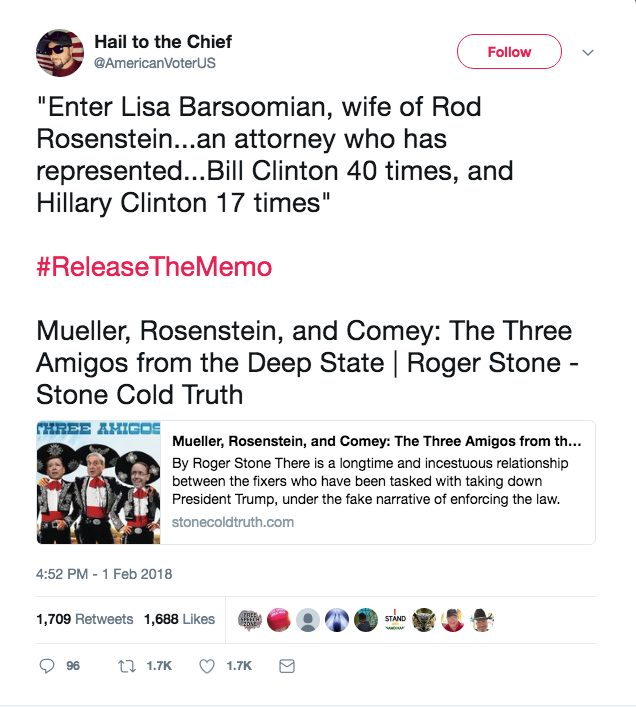 In organized crime terminology, we could categorize at least some of Barsoomian’s duties as that of being the “cleaner”. The cleaner is called to the scene of the crime and erases all the evidence. She has certainly served in that capacity. She is the ultimate shot blocker as she has also served as the guardian of the Deep State secrets gate. Both of these roles are embodied by the following: In the days of Janet Reno’s tenure as the Attorney General, privacy activists’ request for information about the FBI Carnivore email surveillance system were received and ignored by the FBI. It took a court action to partially release a small part of the program which showed that the system erased 4th Amendment protections for all Americans. Representing the FBI and their resistance to the FOIA requests was Lisa Barsoomian.

Along with her boss, R. Craig Lawrence, Barsoomian is the go-to attorney for the Democratic establishment in D.C. She has made her living defending the swamp and preventing the public from gaining access to information about the Obama administration that they are entitled to under the Freedom of Information Act.

Lisa has represented FBI in blocking FOIA requests filed by Judicial Watch.
She has also represented CIA in blocking requests.
Barsoomian also rep. WJClinton in a lawsuit in ’98 pic.twitter.com/WjV7LB7Bul

“But more importantly, she is the wife of Rod Rosenstein, the man who appointed Robert Mueller. Rosenstein supervises Mueller and has to approve all of his subpoenas, his depositions, and his indictments.”  This is a case of who is watching the watcher. Because Barsoomian represents what strongly appears to be Ddep State interests, the relationship of Rosenstein and Mueller is inappropriate because of the personal conflict of interest. This is not only unethical, it is illegal in the world of special prosecutors.

As the Assistant Attorney General, Rod Rosenstein is supposed to be non-partisan and impartial, but in reality he has deep family and financial connections to the Clintons, Obama and the Democratic Party, as expressed through his wife, Lisa Barsoomian.

The following graphic encapsulates so much of what is being claimed in this article.

Here is another graphic which illustrates the duplicity of the Deep State and what a major player Lisa Barsoomian has become to that interest. 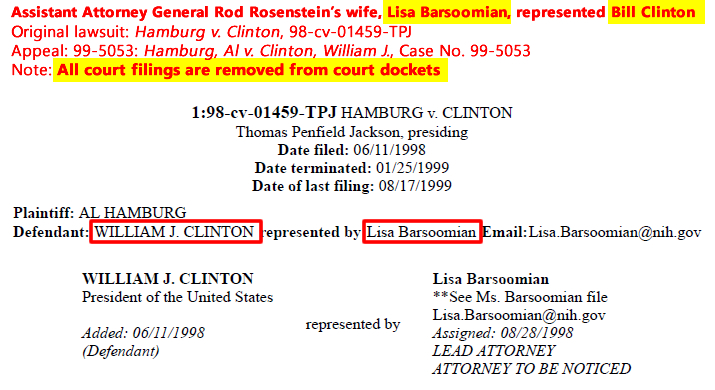 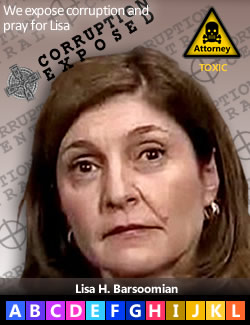 “Lisa H. Barsoomian, U.S. Attorney, wife of Assistant Attorney General Rod J. Rosenstein. Graduated from Georgetown Law. Protégé of James B. Comey and Robert S. Mueller. Represented Bill Clinton in 1998. Researchers say the Internet has been cleansed of information about Barsoomian which is a telltale sign of a protected rogue Deep State C.I.A. operative. She has specialized in opposing Freedom of Information Act requests on behalf of the intelligence community.

Rod J. Rosenstein has no business being involved at all in the Hillary Clinton/DNC-triggered Russia investigation, much less the selection of his mentor Robert S. Mueller, III as special counsel. This is because Rosenstein’s wife, Lisa H.Barsoomian (no photo available), represented Bill Clinton in 1998 with her boss, R. Craig Lawrence (6,459 cases, 321 pgs. 10 MB) . Lawrence also represented Mueller (3 times), Comey (5 times), Obama (45 times), Kathleen Sebellius (56 times), Bill (40 times) and Hillary (17 times) between 1991-2017. Barsoomian has herself represented the FBI (at least 5 times). Barsoomian’s loyalties are clearly tainted. How could such “pillow talk” not have influenced Rosenstein? This clearly violates the “appearance of impropriety” lawyer rules. It is obvious they owe their careers as U.S. Attorneys to Comey, Mueller, Obama, Bush and the Clintons, and CANNOT therefore be impartial. The other odd situation is Barsoomian’s NIH (National Institute of Health) email address even though she has been involved in 100’s of cases representing the D.C. Office of the U.S. Attorney. Is she on loan from the C.I.A.? The C.I.A. often uses another organization as “cover” for their activities.”