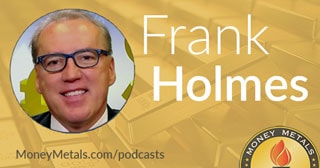 Coming up Frank Holmes of U.S. Global Investors joins me. We dig deeper into the subject of Trump’s tariffs and Frank shares his fears for the economy if things progress further from here. Also, he tells us what needs to happen for metals to move to the upside again after the recent pullback. Don’t miss a fantastic interview with Frank Holmes, coming up after this week’s market update.

Well, as trading for the second quarter comes to an end, precious metals investors are hoping the recent downside momentum in prices will also come to an end.

Hedge funds and other institutional investors often add or remove positions at the end of a quarter in order to rebalance their portfolios or put window dressing on them, as the case may be. It’s also not unheard of for markets to be manipulated around quarter end and other significant dates. But whatever the cause, gold and silver spot prices extended their recent slump this week.

Gold prices sold down to a 6-month low at the $1,250 level on Thursday. As of this Friday recording, the monetary metal trades at $1,252 an ounce and is posting a 1.4% loss for the week. The silver market tested the $16.00 level on Thursday, also a 6-month low. Spot silver currently comes in at $16.15 an ounce, down 2.1% this week as of this Friday morning recording.

Precious metals markets certainly aren’t attracting momentum buyers or generating much interest from the public at large. These are the kind of market conditions that attract only those who appreciate the long-term value offered by gold and silver. Unlike any given paper or digital asset that could become worthless decades from now, precious metals have intrinsic value that will never disappear completely regardless of trends in politics or the economy.

That’s why gold continues to be accumulated by investors and central banks around the world that have very long-term time orientations. That’s why gold and silver were written into the U.S. Constitution as the money of the states.

Of course, over time the U.S. monetary system has veered away from a gold and silver backed system and toward a pure fiat system. Part of the problem is that the Constitution doesn’t explicitly prohibit Congress from creating a central bank or emitting bills of credit. Article I, Section 10 forbids the states from issuing paper money or making anything but gold and silver coin a tender in payment of debts. But the ability of the federal government to circumvent sound money practices is more open to interpretation.

In the decades since, the U.S. Supreme Court has rarely struck down any act or program based on it not being an enumerated power. Constitutional jurisprudence steadily shifted away from strict constructionism and toward the notion of a more flexible, “living” Constitution. Strict constructionism fell almost completely out of favor after Franklin Roosevelt threatened to pack the Supreme Court with 6 additional justices – bullying them into permitting his New Deal programs and gold confiscation decree.

Of course, there have been justices on the Supreme Court who have tried to revive originalism – notably the late Antonin Scalia. With the retirement of Justice Anthony Kennedy this week, President Trump now has an opportunity to put another originalist on the High Court.