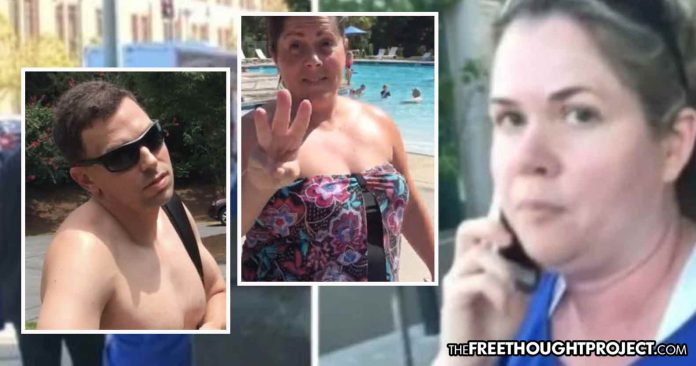 As 2018 marks the “Summer of the Snitch,” it appears that people have finally had enough of neighborhood busybodies.

Snitches are not a new problem—they have been terrorizing communities in America for decades—but this summer it seems like people have finally had enough, and are beginning to fight back. In the past, cop-callers have been able to play the role of the concerned citizen or innocent victim, despite the fact that they were unleashing violent mercenaries on people who are no threat to anyone. In most situations where police are called, a simple conversation will solve the problem without the risk of violent escalation, which is sadly common in police encounters.

However, there have been multiple recent incidents across the country that give us some hope that the tables are beginning to turn on the snitches. In these cases, the nosy neighbors didn’t get a pass and a pat on the head, but were instead publicly humiliated and even lost their jobs in some circumstances.

Has the American snitch culture finally worn out its welcome?

Below are a few recent situations where paranoid busybodies with nothing better to do called the cops on innocent people and many of them quickly came to regret it:

The summer of the snitch began this May, at Lake Merritt Park in Oakland, California, when a woman called the police on a black family for having a barbeque. Although they were all in a public park, the woman who the internet later named “Barbeque Becky” accused the family of trespassing, and told them that they were “going to jail.”

However, much to Barbeque Becky’s dismay, when the police showed up they did not make any arrests or write any citations and allowed the barbeque to continue. Footage of the encounter went viral and instead, Barbeque Becky became the most popular meme on the internet for several weeks.

Now, Kenzie Smith, a member of the family who had the police called on them that day, is running for city council in Oakland.

Alison Ettel, the CEO of a cannabis company called TreatWell Health, was recently forced to resign from her position after she snitched on an 8-year-old girl who was selling water on the sidewalk. Ettel threatened to report the young girl for selling water without a permit, and thus became known as “Permit Patty.” She claimed that she was only threatening to make the call to scare the girl and that she didn’t actually call the police, but the 911 call was later released to the media.

After the call was released, Ettel changed up her story, telling CNN that “I did call the police, but not on anybody. I said I’d like to talk with someone about if something is legal or not. I said I am not doing a report, and I am not asking for any dispatch. I just want information. I asked, is this legal? She said ‘no.’”

There was a happy ending for the little girl who was selling water, as it was recently reported that a good Samaritan was offering to pay for her to go on a trip to Disneyland.

So my little cousin was selling water and didn’t have a permit so this lady decided to call the cops on an 8 year old. #PermitPatty pic.twitter.com/SiL61pnAgl

A woman named Stephanie Sebby-Strempel threatened to call the police on a 15-year-old boy who was invited by a friend to swim at a community pool. In the tirade where she threatened the boy, she repeatedly hit him, and it was all captured on video. The video went viral on Facebook, and instead of arresting the boy, the police later showed up at the woman’s house to speak with her, and she ended up getting into an altercation with them and was ultimately arrested after biting one of the officers.