Over the course of two tumultuous decades, the US government has determinedly endeavored to destabilize, undermine and ultimately depose the democratically-elected government of Venezuela without pause. First they came for Hugo Chavez, then his successor Nicolas Maduro.

One wouldn’t be able to discern this iniquitous reality from mainstream Western news reporting, however. Alan MacLeod, an academic specializing in media theory and analysis — and member of Glasgow University’s respected Media Group — set out to discover why.

In search of answers, he compiled 501 articles, both news reports and opinion pieces, on Venezuela published in American and British newspapers during four pivotal periods in the country’s recent history — Chavez’s election as President in 1998, the failed April 2002 US-orchestrated right-wing coup, his death in 2013, and the incendiary, blood-spattered opposition protests of 2014. He also conducted extensive interviews with many journalists and academics covering events within and without Caracas.

His findings are compiled in the book Bad News from Venezuela: Twenty years of fake news and misreporting — speaking exclusively to Sputnik journalist Kit Klarenberg, he summarizes the most shocking.

Prior to 1998, mentions of Venezuela in the Western media were rare — ever since the election of Chavez, and the resultant revolutionary changes his government instituted, catapulted the country to the top of the mainstream news agenda, where it remains to this day.

The radical President was a very divisive figure the world over from the day he took office — as Alan records, some viewed his new government as an inspirational model to follow, others that Venezuela had been transformed into a “veritable terror state,” that should be “invaded forthwith.”

“I found almost all mainstream media reporting on Venezeula post-Chavez’s election, seemingly irrespective of the apparent ideological inclination of the newspaper, offers a massively limited viewpoint, heavily focused on the negative end of the spectrum. Often this reporting has been entirely contrary to the best empirical evidence available — studies conducted by the United Nations and the World Bank, for instance — which showed many positive things were happening in the country. Western journalists have almost uniformly presented Venezuela as sliding into dictatorship,” Alan told Sputnik.

In a sense, media misrepresentation of Venezuela shouldn’t surprise — for one, the smearing of governments and leaders threatening to the US Empire’s commercial and financial interests in Latin America has a long and established history. Guatemala’s Jacobo Arbenz, Cuba’s Fidel Castro, Chile’s Salvador Allende and Nicaragua’s Sandinistas were all subjected to intense media vilification during their periods in power. However, Alan notes structural issues within the news industry also play an increasingly pivotal role in distorting media reportage.

“There’ve been huge cuts to journalism budgets in recent years, and mainstream outlets increasingly rely solely on major news agencies — Reuters, Bloomberg — for their information about foreign countries. As a result, a tiny cadre of Westerners — perhaps only a dozen people — are the source of most of the world’s news about Venezuela. Furthermore, Bloomberg and Reuters have themselves outsourced much of their own reporting to local Venezuelan journalists, who are uniformly antagonistic to Chavez and Maduro,” he explains.

Alan interviewed many of these journalists for his book, and documents how some were heavily and unashamedly involved in the various attempted coups against Chavez over the years. Some “proudly boasted” of themselves as the “ideological spearhead” against the Chavista movement — but despite their questionable histories, they are invariably presented as neutral, objective on-the-ground observers when they surface in the Western media.

Moreover, Alan says Western journalists who live in Venezuela live in the east side of Caracas in guarded citadels among the country’s financial elites, and rarely if ever venture into working class areas of the city. As a result, it seems to them every Venezuelan hates the government — because everyone in the small societal subset they meet does hate the government.

Even reporters sympathetic to Chavez admitted they frequently engaged in self-censorship, due to the antagonistic atmosphere of the newsrooms they work in. For instance, former FT journalist Matt Kennard told Alan he was acutely aware there were stories he should never pitch to his editors, because “he knew he couldn’t say anything other than Chavistas are some sort of Nazi blitzkrieg, wreaking havoc on Venezuela.”

Some of Alan’s interviewees even admitted to disseminating ‘fake news’ — stories which were at best twisted massively to misrepresent the truth, or at worst had zero basis in fact. One bragged of how he’d gotten a story about a condom costing US$755 in Venezuela into the Western media, saying “sexy tricks” were a good way of getting negative, anti-Chavista stories into the media. 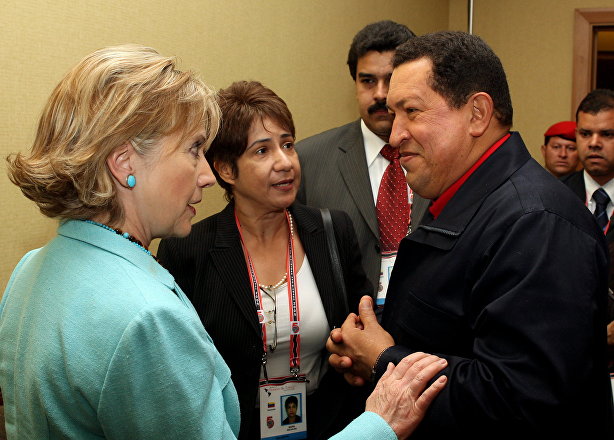 Many such fictions abound in mainstream reporting on Venezuela, despite in many cases being retracted by the outlets that originally published them. For example, a fantastical story about a large box of McDonald’s fries costing US$126 in Venezuela — “based on willing, deliberate misinterpretation of the multi-tiered exchange rate the country uses,” Alan says — is still invoked by Western journalists in stories critical of the policies of Chavez and Maduro.

A Tale of Two Leaders

When Chavez died in 2013, the reaction from much of the world was one of deep and cohering sadness. Bolivia’s President broke down and cried on television, saying his country was “destroyed” by the news, but Chavez would “remain an inspiration to the peoples struggling for liberation” against the US. President Correa of Ecuador called him “a great Latin American, a great human being” who “the whole world will recognize for greatness and courage.”

The governments of Argentina, Brazil, Chile, the Dominican Republic Ecuador, Haiti, Peru and Uruguay all declared three days national mourning in response, Nicaragua and Bolivia declared a week, Cuba two days, Suriname one — more countries in total than declared days of national mourning after the death of Nelson Mandela.

© AP PHOTO / FERNANDO LLANO
A soldier stands on an armored vehicle after participating in a military parade commemorating the one year anniversary of the death of Venezuela’s former President Hugo Chavez in Caracas, Venezuela, Wednesday, March 5, 2014

However, as Alan’s work makes clear, mainstream coverage of his death almost universally stated Chavez had been a dangerous, fascistic lunatic. The Guardian’s Rory Carroll, the paper’s lead reporter on Venezuela 2006 — 2012, said “millions” of Venezuelans “detested him as a thug and charlatan”, and his passing would be an occasion “to bid, vocally or discreetly, good riddance”.

The Times presented Chavez to its readers as a dogmatic, violent narcissist, “[fascinated] with the sound of his own voice” who “went out of his way to attack…business leaders, bankers, newspaper owners, trade union bosses…even the Catholic Church”. In a separate article that day, the paper further presented Chavez as full of “idiotic bombast” and suffering from a “Christ complex”. Many other papers were similarly quick to engage is pseudo-psychological diagnosis of Chavez, portraying him as bedevilled by various deleterious mental disorders.