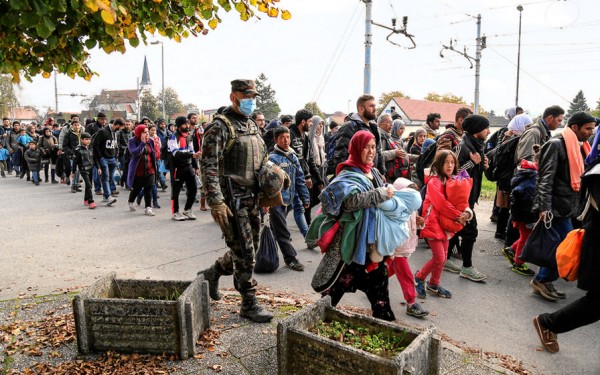 A Doctors Without Borders international chapter and several other non-governmental organizations (NGOs) have been charged with human trafficking under the auspices of doing humanitarian work.

As reported by The Gateway Pundit, the Alternative for Germany (AfD) filed criminal charges against seven German-based NGOs including a Doctors Without Borders chapter in the country. It seems as though the Left-wing organizations may be part of a larger effort to flood Europe with Muslim migrants who don’t share European cultural, religious, or social values.

The groups being charged are Against SOS Mediterranee, Sea-Watch, Doctors without Borders Germany, Save The Children Germany, Jugend Rettet (all Berlin), Mission Lifeline (Dresden) and Sea-Eye (Regensburg).

The controversial NGOs have come under scrutiny lately for their efforts picking up illegal immigrants off the coast of Libya under the pretense they are “being rescued from drowning” and bringing them to Europe.

The allegations come as European leaders are rethinking their open arms-open borders policies regarding migrants from the war-torn regions of the Middle East and North Africa, regions which are also rife with terrorist elements and militants.

Germany’s Chancellor Angela Merkel, The New York Times reported, reversed her open borders migrant policy after coming under extreme pressure from rival political factions and even some within her own governing coalition. “We share a common goal in migration policy,” the party said in a statement. “We want to order, control and limit migration to Germany.” Like other European leaders, she has agreed to the establishment of “detention centers” in Mediterranean countries including Greece and Spain, as well as North Africa, to house migrants until their asylum claims are heard. If asylum is not granted they will be sent home. In order to secure an agreement with other EU nations, she had to agree they would not be forced to take in anyone granted asylum.

Illegal to aid and assist in illegal immigration

The wave of populism that hit Europe in the wake of crisis prompted arguments that populist discontent was simply a racist and bigoted response to “foreigners.” There’s no doubt that that’s part of the picture. But what has been lost on many is that a lot of Europeans were rejecting policies that were being mandated from the EU headquarters in Brussels, without democratic assent. This has been a major driving force in national elections across Europe in recent years, as well as in the infamous Brexit vote to leave the EU.

It also seems likely that groups like Doctors Without Borders Germany have been contributing to the unrest by allegedly trafficking humans into Europe.

TGP noted that the charges come as some governments in Europe have begun to actively shun migrants. The Italian government, for instance, no longer allows migrant-filled ships to dock at its ports. In addition, the Maltese government has begun impounding Sea Watch ships that have been sponsored by the German Lutheran Church using taxpayer funds. (Related: Texas poised to withdraw from refugee resettlement program.)

The charges filed by AfD are based on German laws against human trafficking that make it illegal to “aid or assist in illegal immigration repeatedly or on behalf of several foreigners, or for profit.”

All 92 AfD members of the German parliament signed onto the allegations.

According to the charges, the listed NGOs use their trafficking activities to solicit millions of euros’ worth of donations.