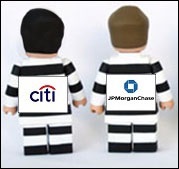 Australia is showing its muscle in an area where the U.S. has tip-toed around for almost two decades. We’re talking about Wall Street’s brazen antitrust activity in securities offerings.

Last month the Australian Competition and Consumer Commission (ACCC) announced that “criminal cartel offences” had been brought against Citigroup Global Markets Australia and Deutsche Bank over a share offering for Australia and New Zealand Banking Group (ANZ) that had been conducted in 2015. ANZ was also criminally charged in the matter as were three executives of Citigroup Australia, two executives at Deutsche Bank and one at ANZ.

Although JPMorgan had been part of that underwriting syndicate, it wasn’t charged. The Financial Times reported at the time that “JPMorgan, which jointly underwrote the share placement with Citi and Deutsche, has not been charged by prosecutors and has reportedly been granted immunity after self-reporting issues to regulators.”

The ACCC provided sparse details on exactly what the underwriting cartel was alleged to have done, saying it was now a matter for the court to decide. Business media, however, suggested the criminal charges arose out of a concerted effort by the underwriting banks to conceal the fact that the 2015 share offering for ANZ was not fully subscribed, that the banks were stuck with a big chunk of the offering and that they then conspired on how they would dispose of the shares.

Being criminally charged with cartel activity is nothing new to Citigroup – or JPMorgan. Both pleaded guilty to participating in the rigging of foreign currency exchange markets on May 20, 2015. This is a small peek into what the U.S. Justice Department charged JPMorgan with in the matter:

“In furtherance of the conspiracy, the defendant and its co-conspirators engaged in communications, including near daily conversations, some of which were in code, in an exclusive electronic chat room which chat room participants, as well as others in the FX Spot Market, referred to as ‘The Cartel’ or ‘The Mafia.’ Participation in this electronic chat room was limited to specific EUR/USD traders, each of whom was employed, at certain times, by a co-conspirator dealer in the FX Spot Market. The defendant participated in this electronic chat room through one of its EUR/USD traders from July 2010 until January 2013.”

JPMorgan and Citigroup were given a deferred prosecution agreement by the Justice Department and each put on three-year probation. One of the terms of JPMorgan’s probation was the following:

That last sentence could be construed to mean that JPMorgan would have to self report any alleged fraud – even in Australia. Notably, the identical paragraph appears in the May 2015 deferred prosecution agreement with Citigroup, which was signed by its General Counsel Rohan Weerasinghe.

If media reports are correct, something propelled JPMorgan to beat Citigroup in the race to cooperate with investigators in Australia, leaving Citigroup criminally charged while JPMorgan has, thus far at least, avoided prosecution in the ANZ matter.

What JPMorgan might have been thinking about was that it was going to have a tough time convincing any court that it didn’t know that manipulating a stock offering was a bad thing to do. On October 1, 2003 the SEC fined JPMorgan $25 million and charged it with the following:

“Rule 101 of Regulation M, among other things, prohibits underwriters, during a restricted period prior to the completion of their participation in the distribution of IPO shares, from directly or indirectly bidding for, purchasing, or attempting to induce any person to bid for or purchase any offered security in the aftermarket. As a prophylactic rule, Regulation M is designed to prohibit activities that could artificially influence the market for the offered security, including for example, supporting the IPO price by creating the perception of scarcity of IPO stock or creating the perception of aftermarket demand.

“During the restricted period, i.e., prior to J.P. Morgan’s completion of participation in the distribution of IPO shares, J.P. Morgan attempted to induce certain customers to make aftermarket purchases in violation of Rule 101 of Regulation M by engaging in the following activities:

It’s essential to note that when the Wall Street banks have been recently criminallycharged with antitrust activity, it has been in the arena of rigging the benchmark interest rate known as Libor or foreign exchange. When it comes to colluding in securities offerings, that’s the domain of the Securities and Exchange Commission (SEC), which has only civil, not criminal, powers. That’s not a bug – it’s a feature of how the one percent rule America. And it’s a feature that has been further enshrined by a highly dubious U.S. Supreme Court decision. (The decision was so bad that Justice Clarence Thomas took the unusual step of writing a dissenting opinion.)

The 2007 Supreme Court case was Credit Suisse v Billings. Investors had filed suit alleging that the investment banks, acting as underwriters, violated antitrust laws by forming IPO syndicates for hundreds of technology-related companies. The suit charged that the underwriters unlawfully agreed that they would not sell newly issued securities to a buyer unless the buyer committed to buy additional shares of that security later at escalating prices (laddering); or investors agreed to pay unusually high commissions on subsequent security purchases from the underwriters; or agreed to also purchase less desirable stocks (tying). The investment banks moved to dismiss the complaint, claiming that federal securities law preclude application of antitrust laws to the conduct in question. The District Court dismissed the complaints, but the Second Circuit Court of Appeals reversed the decision. It was then accepted by the U.S. Supreme Court.