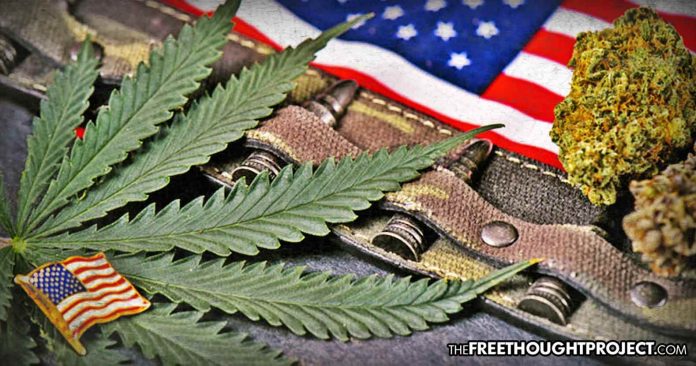 Local growers are making a difference by offering free cannabis samples to veterans, as an alternative for the dangerous opioids prescribed by the VA.

Santa Cruz, CA – While the United States federal government and the Department of Veterans Affairs continue their efforts to keep cannabis from the people who need it the most, local growers are starting a movement in a state that is known for its “big government,” in an effort to make a difference in their community.

It is no secret that the VA has a history of failing to provide proper medical care for the veterans in its care. In fact, in 2015, a leaked document showed that more than 238,000 veterans died waiting for treatment, according to the Department of Veteran Affairs’ backlog.

When veterans do receive treatment, it comes in the form prescription drugs, many of which are opioid painkillers and antidepressants that are highly addictive, have alarming and dangerous side effects, and have been shown to worsen the symptoms they are supposed to treat.

All the while, the VA continues to deny access to the natural medicine that has saved countless veterans from ending their lives—cannabis.

Instead of waiting around for the federal government to reclassify cannabis, the Santa Cruz Veterans Alliance took matters into their own hands and they started a program to help veterans in need by giving them free access to cannabis.

The alliance hosts a program where each month, veterans can come retrieve tickets that they can redeem at local dispensaries, in exchange for a gift bag of cannabis products that includes lotions, pills, candies, hemp oils and varieties of the plant that they can smoke.

The program is made possible by founders of the alliance, veterans Aaron Newsom and Jason Sweatt, who started growing cannabis, selling the product to local dispensaries, and then using the funds to pay for the program for veterans in need. As the Santa Cruz Sentinel reported, “they view medical marijuana as a better alternative than addictive opioids that are typically are prescribed for pain.”

Even though countless veterans have shared testimonies of how cannabis has treated their PTSD, pain, depression, and anxiety, the VA still continues to claim that the plant is a dangerous drug, and has no medicinal value.

Congress now has the option to decide whether it will allow the VA to perform studies looking at the effectiveness of cannabis to treat chronic pain and PTSD in veterans. A bill was introduced this spring by Democratic Rep. Tim Walz and Republican Rep. Phil Roe, which would allow the research.

Walz told the New York Times that he believes the passage of the bill could be the first start towards VA doctors eventually having the freedom to write cannabis prescriptions for their patients.

“You may be a big advocate of medical marijuana, you may feel it has no value,” Walz said. “Either way, you should want the evidence to prove it, and there is no better system to do that research than the VA.”

California became the first state to legalize cannabis for medicinal use in 1996. But it was not legal for recreational use until earlier this year, and it came packed with a host of taxes and regulations.