This Fed is getting seriously hawkish: It revealed that instead of thinking about backing off rate hikes, it’s replacing the yield curve.

In the minutes of the FOMC meeting on June 12 and 13, released this afternoon, there was a doozie, obscured somewhat by the dynamics of the rate hike plus the indication that there would be two more rate hikes this year, for a total of four, up from three at the prior meeting, with more hikes to come in 2019, along with other changes – a phenomenon I called, This Fed Grows Relentlessly More Hawkish, Gone are the Kid Gloves.

But the doozie in the minutes was about the flattening “yield curve.”

So this has become a popular recession indicator that has cropped up a lot in the discussions of various Fed governors since last year. Today, the two-year yield closed at 2.55% and the 10-year yield at 2.84%. The spread between them was just 29 basis points, the lowest since before the Financial Crisis.

The chart below shows the yield curves on December 14, 2016, when the Fed got serious about raising rates (black line); and today (red line). Note how the red line has “flattened” between the two-year and the 10-year markers, and how the spread has narrowed to just 29 basis points: 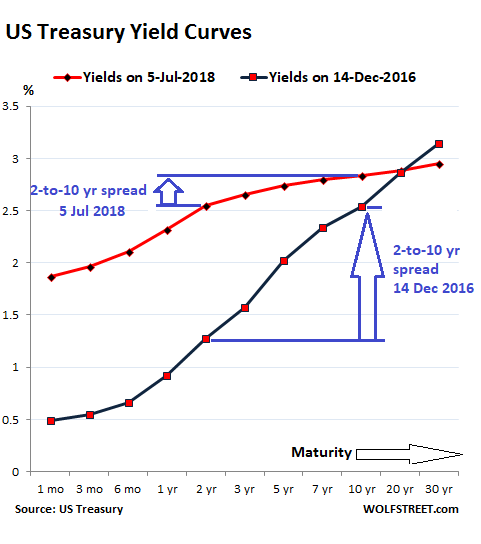 The chart below shows the two-year yield (black) and the 10-year yield (red) going back to 1992. Note how the spread has been narrowing in recent months (click to enlarge): 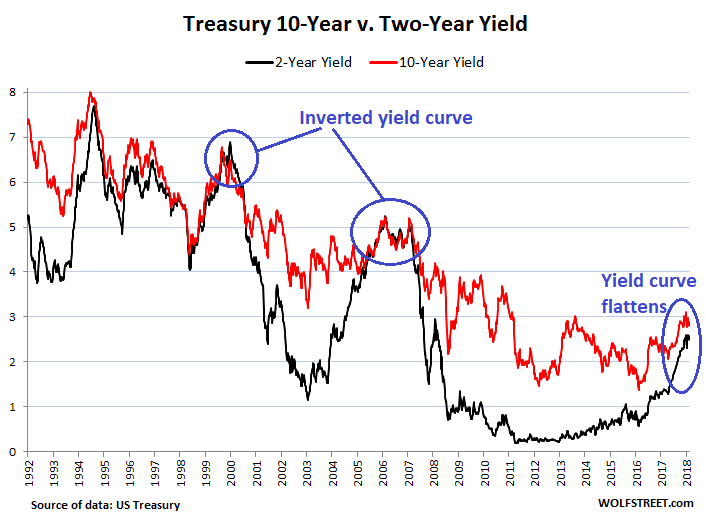 The chart below tracks this spread for every day back to 2008. Today, the spread, at just 29 basis points, is the lowest since before the Financial Crisis: 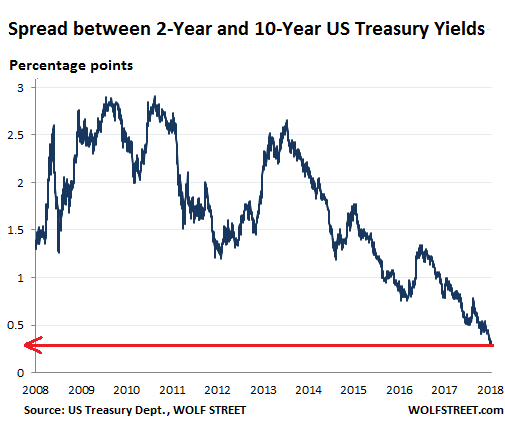 There has been a lot of handwringing about this being an indicator that the next recession is nearing and that the Fed should back off with its rate hikes.

But this Fed is getting seriously hawkish: In the minutes today, it revealed that instead of thinking about backing off with its rate hikes, it’s throwing out the flattening yield curve.

It explained what factors – in addition to the “gradual” rise in the federal funds rate, as per the Fed’s rate hikes – cause the yield curve to flatten that make it unreliable as a recession indicator:

And according to “some participants,” these types of factors “might temper the reliability of the slope of the yield curve as an indicator of future economic activity,” the minutes said.

In other words, the Fed’s massive balance sheet, nine years of near-zero interest rate policy, and other factors might be distorting investors’ thinking. And this distorted thinking causes investors to pile into long-term Treasuries at these low yields, and thus push down these yields further.

Hence, the “information content” of the yield curve – the signals of a coming recession – might be distorted.

There was no consensus among FOMC members about the lack of “reliability” of the yield curve as a predictor, but there was a “staff presentation” about a new recession indicator to replace the yield curve:

The staff noted that this measure may be less affected by many of the factors that have contributed to the flattening of the yield curve, such as depressed term premiums at longer horizons.

This “staff presentation” took place during the meeting on June 12 or 13. On June 28, the Federal Reserve Board published a note  that explained in greater detail why this new recession indicator would be superior to the yield curve.

The note by two staff economists, Eric Engstrom and Steven Sharpe, tracks the market’s expectations of the next rate cut, based on the logic that the Fed will cut rates when the next recession begins.