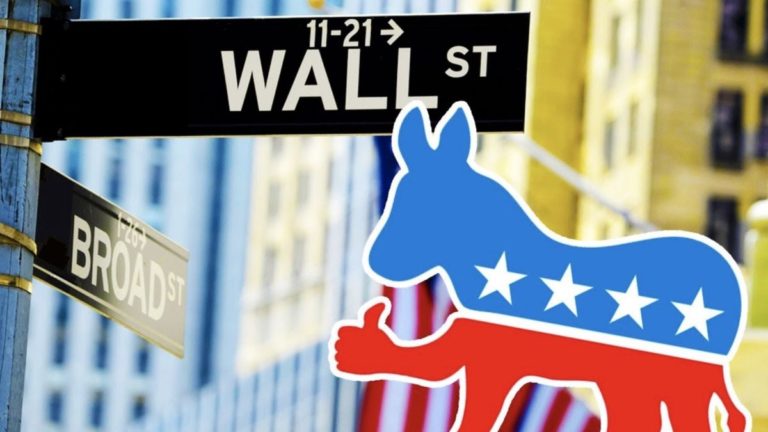 My administration is the only thing between you and the pitchforks.”

– Barack Obama to bank CEOs in 2009 (he sure protected them)

I’m only half kidding with the title here. No, I don’t think establishment Democrats are actually trying to lose, but I agree with the sentiment that they’d rather continue to lose to Donald Trump with someone like Hillary Clinton, than win with someone like Bernie Sanders.

The fight within the Democratic Party is very real and ultimately comes down to two groups with completely different understandings of reality. The big donor, Wall Street side of the party still wants to claim everything’s normal and fine with the exception of Donald Trump. As soon as he can be removed we can all go back to American exceptionalism; or something like that. Easy peasy. In contrast, the other side acknowledges things are very, very rotten and huge change is imperative. To summarize, one side wants to go right back to the Presidency of Barack Obama (with some added militarism), while the other is saying the status quo needs to go.

Forget for a moment what you think of leftist populist ideas, they’re at least willing to admit our country is systemically broken and corrupt, while the other blames everything on Trump and Russia. This isn’t a minor difference within a happy marriage, it’s the sort of conflict that ends in divorce. We remain in a justifiably populist moment in American history, and corporate Democrats want to fight right-populism with Hillary Clintonism. That’s never going to work.

One of the main reasons Trump won is he simply came out and publicly admitted that things are fundamentally broken and big change is in order. You can point out it’s all talk and that Trump’s a fake populist, but if the other side refuses to even acknowledge reality, who do you think’s going to win? We saw in 2016, and we’ll see it again in 2020 if Democrats keep up this nonsense.

Just in case you have any doubt.

35% of Americans have a positive view of the Republican Party.

Democrats. It’d be funny if it weren’t so sad.

Shifting gears a little, the inspiration for this post came after reading a recent article published by NBC News describing a conference held over the weekend for establishment/corporate Democrat cohosted by billionaire real estate developer Winston Fisher. Something akin to Burning Man for the Democratic donor class.

Here are a few of the more cringe-worthy excerpts from the piece, Sanders’ Wing of the Party Terrifies Moderate Dems. Here’s How They Plan to Stop It:

COLUMBUS, Ohio — If Sen. Bernie Sanders is leading a leftist political revolt, then a summit here of moderate Democrats might be the start of a counterrevolution…

That anxiety has largely been kept to a whisper among the party’s moderates and big donors, with some of the major fundraisers pressing operatives on what can be done to stop Sanders, I-Vt., if he runs for the White House again.

The gathering here was just that — an effort to offer an attractive alternative to the rising Sanders-style populist left in the upcoming presidential race. Where progressives see a rare opportunity to capitalize on an energized Democratic base, moderates see a better chance to win over Republicans turned off by Trump.

For the left, Third Way represents the Wall Street-wing of the party and everything wrong with the donor-driven wet blanketism they’ve been trying exorcise since 2016. Thom Hartmann, a liberal talk radio host and Sanders friend, once called the group’s warning about Sanders “probably the most stupid thing I’ve ever heard,” before ticking through all the investment bankers on Third Way’s board…

And they worry the angry left will cost Democrats a rare chance to win over those kind of voters, including Republicans who no longer want to be part of Trump’s GOP.

These fools are sticking to the absurd strategy of appealing to mythical Republicans who don’t like Trump, but would vote for someone like Hillary Clinton. Newsflash, these people don’t actually exist in numbers in the real world.