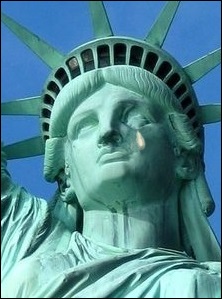 Happy Independence Day. Or not.

Today marks the 242nd anniversary of America adopting the Declaration of Independence and throwing off the yoke of King George III – the tyrant against whom much of our founding document was written. These are among the charges that the crafters of this historic document leveled against the King:

“He has refused his Assent to Laws, the most wholesome and necessary for the public good…

“He has made Judges dependent on his Will alone, for the tenure of their offices, and the amount and payment of their salaries…

“For cutting off our Trade with all parts of the world…

“For depriving us in many cases, of the benefits of Trial by Jury…”

Now consider where we Americans stand today. Within six months of assuming the most powerful position in the world, President Donald Trump, who had never before held public office, had removed the United States from the Paris Climate Accord – a “wholesome and necessary” law for the public good. In May of this year, Trump broke with our European allies and withdrew the U.S. from the Iran nuclear agreement.

The President has insulted the longstanding allies of America while embracing despots and dictators like North Korean leader Kim Jong Un and Russian President Vladimir Putin. This has resulted in the mistrust and disgrace of our country around the world.

The President of our country has refused to provide his tax returns to the American people; he has refused to divorce himself from his far-flung businesses around the world; he continues to profit from these businesses as he tells us that he, alone, is above conflicts of interest.

The President has demanded the personal loyalty of those he places in positions of power in his administration rather than loyalty to their sworn duty to protect the country and the American people.

The President has, without Congressional review or oversight, unilaterally instituted a “zero tolerance” policy that has resulted in effectively abducting babies and children from their parents who were lawfully seeking asylum in our country. The Trump administration has confirmed to a Federal Court that it failed to put procedures in place to allow for the reunification of these children with their parents. This action is against the due process laws of the United States and against international human rights laws – making America appear to be a barbarous nation to the rest of the civilized world while inflicting lifelong psychological damage to innocent children according to leading medical associations in the U.S.

The President has defied longstanding nepotism and ethics rules in the Federal government and placed his own daughter and son-in-law in positions of power in his administration. He has allowed them to personally profit from conflicted business deals while they serve in these roles.

The President has allowed his appointees to Federal agencies to make a mockery of the laws of the United States. Just yesterday the former Deputy Chief of Staff for Operations to EPA head Scott Pruitt came forward on television to reveal that Pruitt routinely ordered his staff to “scrub” names from his official calendar of  meetings with people who would “look bad” to the public. Pruitt is already the subject of 14 investigations over ethics issues as Trump publicly compliments him on the job he is doing.

Trump is further damaging the trust in the United States by our trading partners by unilaterally announcing – without the advice and consent of Congress – the imposition of tariffs on a broad range of products.

As for “depriving us in many cases, of the benefits of Trial by Jury,” Trump has announced that immigrants seeking asylum should be stripped of their court rights and immediately deported back to their country of origin. On June 24 Trump wrote on his Twitter page: “We cannot allow all of these people to invade our Country. When somebody comes in, we must immediately, with no Judges or Court Cases, bring them back from where they came.”

Under a corporatized Supreme Court, most American citizens have already lost their Seventh Amendment right to a jury trial before their peers — a right that was so cherished by our founding fathers. Corporations and Wall Street lobbyists have spent decades putting corporate-friendly Federal judges on the appellate courts and Supreme Court to make mandatory arbitration the law of the land, covering everything from disputes over credit cards to nursing homes to telephone bills and every single transaction involving the consumer and Wall Street. Like the immigrant children being held hostage under the Trump decree, the average American’s ability to build a financial nest egg for their future is being held hostage by a tyrannical private justice system.

Today, as Americans from sea to shining sea fly their flags and garnish their hot dogs and attempt to make sense out of these unprecedented times, we offer these comforting words from our nation’s founding document that has served us so well for almost two and a half centuries: