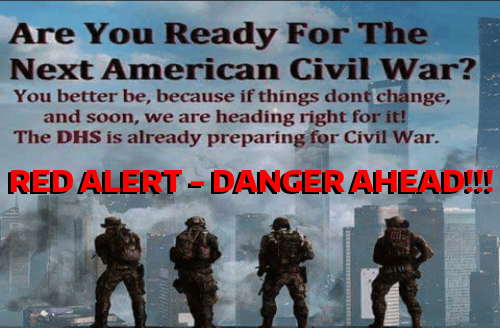 Reporting out of FEMA Region III.

In the 1st video at the bottom of this story featuring Mike Adams the Health Ranger, he immediately tells us why his video was an emergency broadcast: We could lose America if we don’t stop what’s happening right now!

While the Supreme Court’s decision yesterday to uphold President Trump’s travel ban was a huge win for the US Constitution, America and for President Trump’s agenda, as Adams tells us, it may already be too late with the mainstream media weaponizing lies to incite the masses and more and more ‘events’ indicating something very bad is brewing with the increasingly irrational and hostile left growing more angry and completely unhinged every day.

As this new story over at Rasmussen Reports lays out flatly, 31% of Americans now believe a US civil war will be coming soon, with 59% of those polled believing Democrats opposed to President Trump’s policies will resort to violence. Yet as we reported on ANP on June 23rd, should the left suddenly start carrying out violent temper tantrums upon law-abiding Conservative Americans and Conservatives respond to protect themselves and their families, it could end up being a bloodbath for the left with Republican gun ownership in America more than 3 times that of Democrats according to a Pew Research Center poll.

And as we hear from Adams in this video, much of the ‘resistance’ we’re witnessing in America right now is probably being led by none other than Barack Obama. And while the left under Obama had put into place everything they needed during his 8 years in office to turn America into a totalitarian ‘police state’, should violence explode in this country, President Trump could soon turn that against them.

President Trump recently warned Democrats about the escalating confrontations and with the Rex 84 martial law plans having been created years ago to deal with such a scenario, developed by the United States federal government to detain large numbers of American citizens deemed “national security threats” in the event that the President declared a “State of National Emergency”, those calling for violence better watch out what they wish for.

And needless to say, should President Trump need to declare martial law to deal with what might be coming ahead, ‘liberty’ will be lost by everybody in America as the water in the pot continues to boil with most of the frogs within it still having no clue about what’s about ready to hit them. 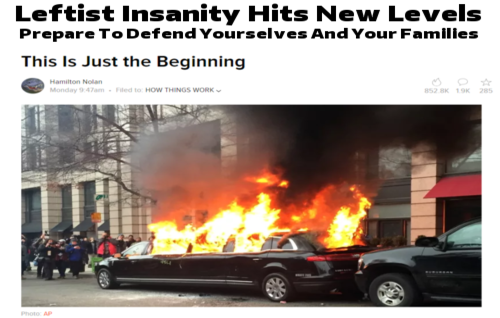 And while we pray that civil war will be avoided in America and the left will finally come to their senses and realize that President Trump and his supporters are NOT Nazi’s nor are we ‘fascists’, as we read in this new story written by Paul Joseph Watson, one leftist lunatic is already claiming ‘this is just the beginning‘ while hinting that the mass bombings of the 1970’s were nothing compared to what’s coming. Really? Why hasn’t Splinter News writer Hamilton Nolan been thrown away for what he writes in his story? From Nolan.:


Do you think that being asked to leave a restaurant, or having your meal interrupted, or being called by the public is bad? My fascism-enabling friends, this is only the beginning.

This is all going to get more extreme. And it should. We are living in extreme times.

I do not believe that Trump administration officials should be able to live their lives in peace and affluence while they inflict serious harms on large portions of the American population. Not being able to go to restaurants and attend parties and be celebrated is just the minimum baseline here. These people, who are pushing America merrily down the road to fascism and white nationalism, are delusional if they do not think that the backlash is going to get much worse. Wait until the recession comes. Wait until Trump starts a war. Wait until the racism this administration is stoking begins to explode into violence more frequently.

Read a f*cking history book. Read a recent history book. The U.S. had thousands of domestic bombings per year in the early 1970s. This is what happens when citizens decide en masse that their political system is corrupt, racist, and unresponsive. The people out of power have only just begun to flex their dissatisfaction. The day will come, sooner that you all think, when Trump administration officials will look back fondly on the time when all they had to worry about was getting hollered at at a Mexican restaurant. When you aggressively f*ck with people’s lives, you should not be surprised when they decide to f*ck with yours.

Stop working for this man. Stop enabling him. Stop assisting him. Start fighting him. 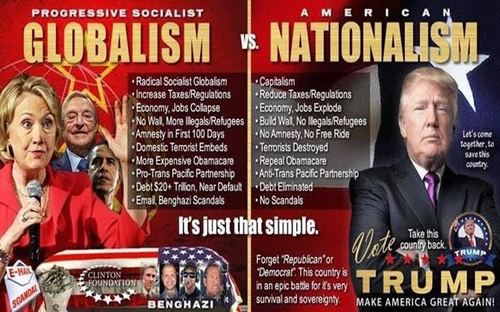 Seriously? Maybe it’s time for Nolan to read TRUE history and take a look at the BULLET that was coming straight at the heart of America named ‘Hillary Clinton’. After 8 years of Barack Obama, the US Constitution and ALL of our rights were left in shambles. Yet as this story over at Zero Hedge reports, most Democrats only care about ‘equal rights’ if you’re a liberal. Can you imagine how having an attitude like that could lead to widespread civil unrest in America? Should Nolan get his way and things get even more ‘extreme’, he and the rest of the radical left will surely come to regret what they have started. Yet is it all intentional to ‘takedown’ America?

The election of Donald Trump as President was likely the ONLY thing that stopped the final takedown of America, with a Hillary presidency surely completing the globalists long worked towards goal to destroy American sovereignty, open up the borders and leaving them in the position of running the government purge of deplorables, Christians, Constitutionalists, preppers and those opposed to a luciferian new world order.

Yet the threats against Conservatives continue as we read in this new story over at Infowars in which they report Democrats in Texas support the ‘firebombing’ of President Trump supporters while in Florida, another deranged leftist has threatened to murder a Republican Congressman’s children. And the media says that ‘deplorables’ are intolerant. Every day we’re getting more and more proof of who the real bigots in America are and Susan and I both get a ‘feeling’ that something really, really bad is going to be a result of this.

In the 2nd video below which the Drudge Report linked to from the Daily Caller we see a great compilation of Democrats and members of the media outright glorifying violence against President Trump supporters while the 3rd video below is titled “Opening Act of Civil War: YOU Must Disarm, But The Left Can Stalk and Bomb“.