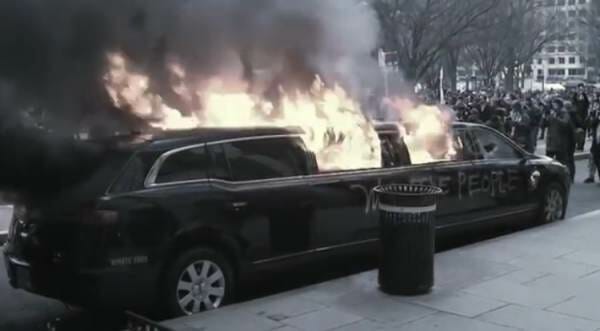 Liberals call Trump and conservatives who support him “Nazis” and “Hitler.” Which as I pointed out in my last column is wrong, reckless, and bordering on insanity. Hitler and the Nazis killed 6 million Jews and tens of millions of others in WWII. Nothing compares to Hitler or Nazis. To make that comparison is obscene.

But it is ironic that Democrats and liberals are the ones who are closest to acting like Nazis. If not Nazis, they sure are acting like the mafia. Or murdering street thugs. Or “domestic terrorists.” Take your pick.

Liberals are purposely demonizing, intimidating and persecuting people whose politics they disagree with. They are inciting violence. And this is no joke: They are going to get someone killed. Whether it’s a Republican politician, or an ICE agent, or just a conservative in the wrong place, at the wrong time, wearing a red Trump MAGA hat. As sure as I’m sitting here, someone is going to kill a conservative based on this violent rhetoric.

Ask Steve Scalise about the odds of that. Ask GOP Congressman Brian Mast. A pro-open borders liberal nutcase was just arrested for threatening to murder his children.

Here are a few more horror stories. Trump’s spokeswoman Sarah Sanders and her family were forcefully kicked out of The Red Hen restaurant in Lexington, Virginia. The hateful, vicious restaurant owner then followed the family across the street and screamed at them in the next restaurant. This is obsessed, stalker, mentally-deranged behavior.

Don’t liberals want to destroy any Christian business for refusing service to gays? Don’t they think government should fine them $100,000? Yet a group of gay waiters (according to the owner of the restaurant) thought it was perfectly okay to refuse service to a Republican?

What’s the difference between refusing service to a gay person, a black person, or a Republican? Isn’t hate, hate?

Can you even imagine a white Republican restaurant owner kicking black Obama officials out of a restaurant? We’d be witnessing mass violence, rioting and anarchy on the streets of every big city in America if that ever happened.

Peter Fonda called for the kidnapping of Barron Trump and for him to be raped in a cage populated by pedophiles. He called for a similar crime against HHS Secretary Kirsten Nielson.

D List Comedian Tom Arnold plans to show up at 12-year old Barron’s school to harass him and “make him feel uncomfortable.”

Can you even imagine what would happen if even after Obama sent the IRS to destroy me (which was a crime by the way), I dared publicly suggest someone attack and rape his two beautiful girls? Who would do that? Only a mentally-deranged liberal.

MSNBC’s Donny Deutch said not only is Trump “Hitler” but that liberals need to start calling all Trump supporters “Nazis.”

HHS Secretary Neilsen was harassed at a NYC restaurant by a DOJ staffer. Pure insanity.

Republican AG of Florida Pam Bondi was verbally assaulted, bullied and spit on outside a movie theatre on Saturday night.

A senior DHS official found a decapitated burnt animal carcass on his doorstep.

A NYU professor published the home addresses of ICE agents nationwide on the Internet.

Ironically, liberals are exhibiting the actual behavior of the “Nazis” they claim Republicans to be. And I repeat, they are going to incite murder.

But it has backfired badly. Even DNC officials are afraid the public is turning off to Democrats. They fear a backlash at the polls in November.

I see the signs everywhere. Democrats have gone way too far. They’re going down to a historic defeat in November.