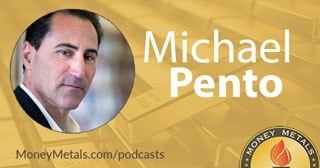 Coming up Michael Pento of Pento Portfolio Strategies joins me examine what’s happening beneath the surface in the markets right now, and why we should all be very leery of putting too much stock into what we’re hearing from the mainstream financial media these days regarding the economy. Don’t miss another sensational interview with Michael Pento, coming up after this week’s market update.

Silver’s outperformance could bode well for precious metals markets heading into next week’s Federal Open Market Committee meeting. The Fed is widely expected to hike its benchmark rate. But as is often the case, the gold market seems to be holding its breath until the actual announcement.

Perhaps next week traders will finally give the gold market a decisive push above or below the $1,300 level. The recent narrowing in the gold to silver ratio in favor of silver gives bulls some hope for a bullish outcome. Silver being the more volatile metal, it tends to lead on both the upside and the downside.

The gold to silver ratio currently checks in at about 77 to 1. The ratio has narrowed from a high of 82.5 to 1 recorded in early April. It has the potential to narrow much further in a bull market for silver.

In the meantime, the precious metals markets will continue to test the patience of bulls. The long, grinding, sideways trading action of the past few months has worn out some metals investors and lulled the general public into disinterest.

As a consequence, bullion buying volumes have dipped. At the same time, selling by the public has increased. Speculators have also piled in on the short side in the gold and silver futures markets.

Sentiment is extremely negative even as gold and silver prices have merely maintained their trading ranges. Although both gold and silver came close to suffering major technical breakdowns this spring, no long-term damage was actually done.

Given the negative sentiment and the strength of the U.S. dollar last month, the downside in metals markets could have been far worse. The fact that it was minimal suggests underlying technical strength.

Of course, few investors are paying attention to precious metals as a safe haven asset class when the financial media are touting rosy economic numbers as a reason to buy stocks. The supposedly stellar unemployment numbers overlook millions of jobless Americans who aren’t counted as officially unemployed. Be that as it may, economic indicators will ebb and flow in cycles.

What isn’t cyclical is the upward trajectory of the national debt and unfunded entitlement liabilities. The U.S. faces a long-term structural funding crisis.

This week, Medicare’s finances were downgraded in a report from the program’s trustees. Medicare’s hospital insurance fund is now projected to be depleted in 2026 – a full three years earlier than projected in the trustees report last year.