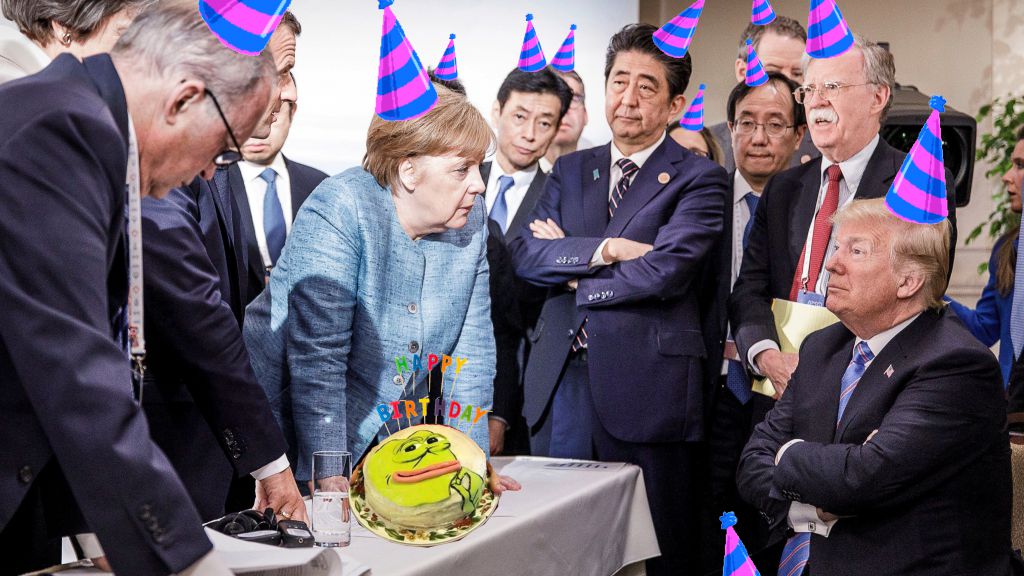 Hey, it was Trump’s birthday, yesterday! And what did Horowitz give everyone as a present?

Here are some highlights:

Comey claims to have not known Huma was married to Weiner:

Strzok’s stated ambition was to stop the Trump presidency. 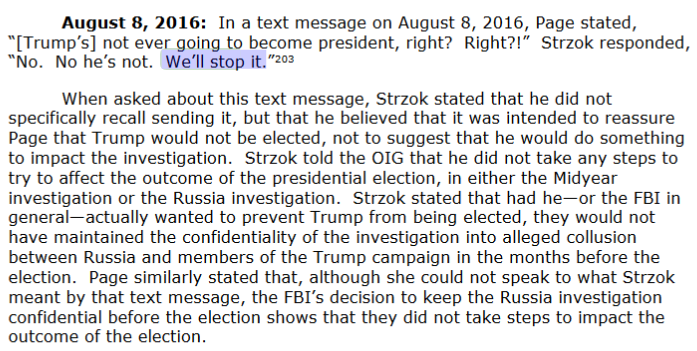 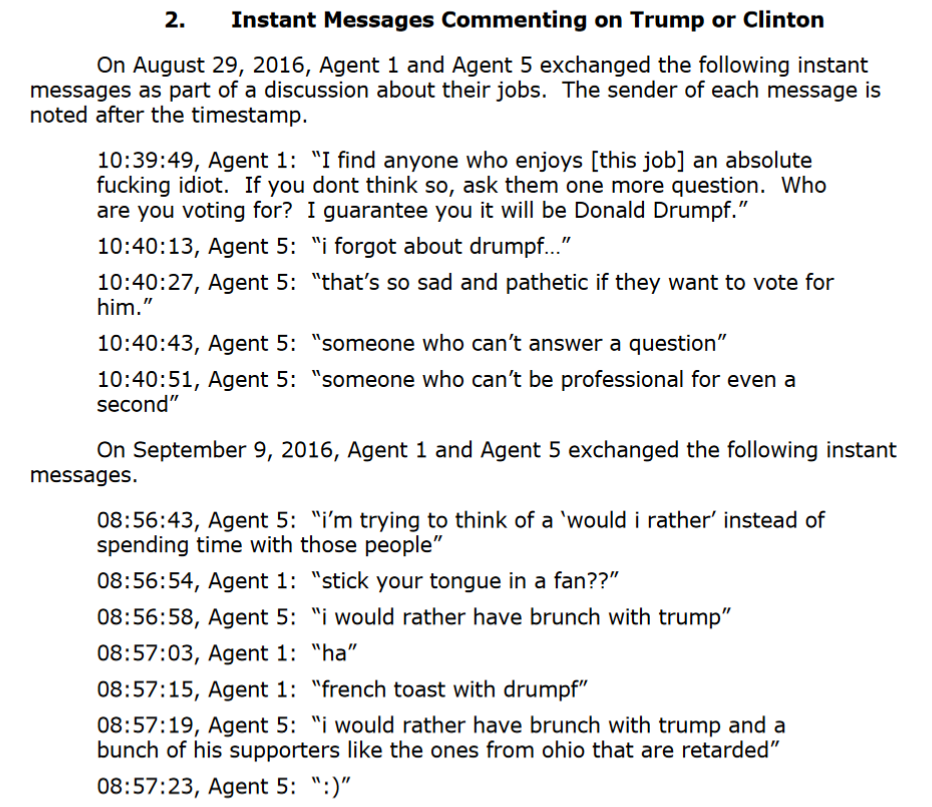 And yes, this report is the edited and redacted version:

@ImperatorRex just put up a great thread about the report, and it’s worth reading – considering he read through the 568 page document TWICE, like some kind of unholy librarian. But seriously, he brings up a lot of great points – points that may not surprise followers of #QAnon, but significant points in that this is all now a matter of public record: Thread by @_ImperatorRex_: “1. Those of you thinking that this public, written IG Report raises more questions than it answers, are EXACTLY on the money. That’s the ent […]” #MAGA

Thread by @_ImperatorRex_: “1. Those of you thinking that this public, written IG Report raises more questions than it answers, are EXACTLY on the money. That’s the entire point of it. Some observations. 2. You’ll notice that I used the word ‘public’. That’s because t […]” #MAGA

So, wild stuff happening, even with the heavily edited version we’re seeing right now. With that all in mind, let’s jump into Q.

He only dropped two posts tonight, starting with this one: 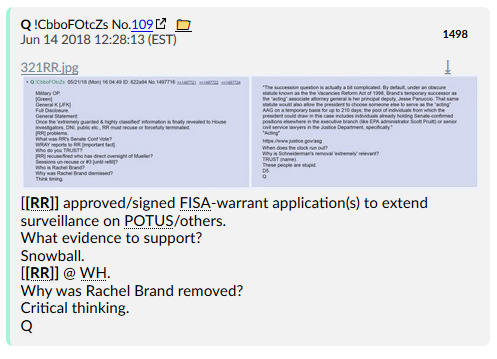 Q’s image in this was a bit too small, too blurry, and formatted strangely, with that side-by-side thing going on. Part of me wondered if there was something deliberate in the way he caught this image, but judging by the form-factor, it looks like he took landscape screenshots, and edited them together on a phone, if I had to guess.

Anyway, he’s just quoting his own post from May 21, so here it is, in full: 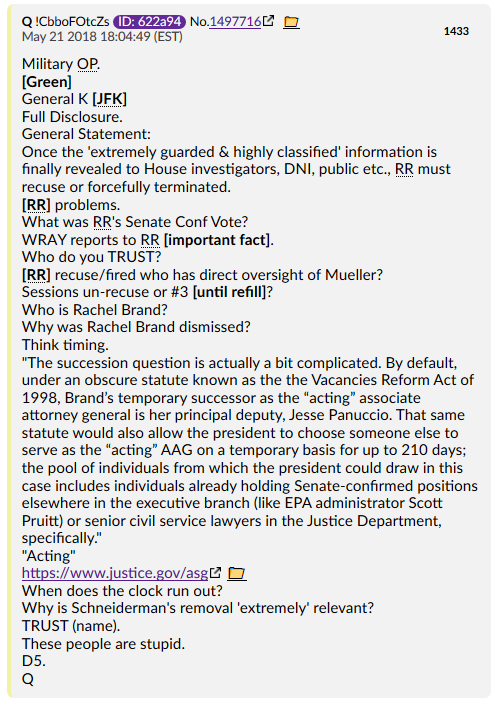 As for Q’s question about evidence implicating Pencil-neck in the signing of the FISA warrants, we have the memo from all the way back in January!

So yes, he’s covering up his own crimes in this report.

As for the Rachel Brand question – it’s become clear that she was just a sort of placeholder put there to run down the clock on Panuccio’s tenure. After 210 days had passed, Trump was free to put whoever he wanted in the position of Assistant Acting Attorney General – without Senate Confirmation.

And I have a new theory as to who that will be? 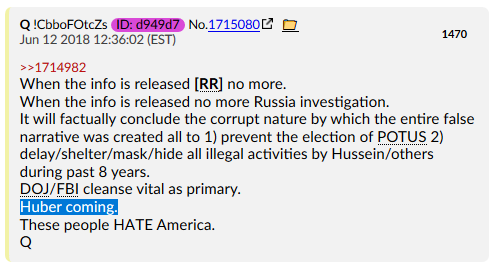 Wouldn’t that be wild? 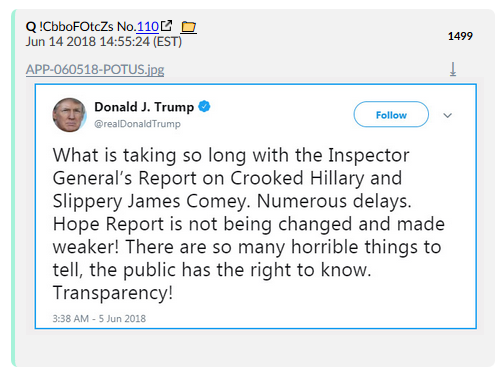 I like how Trump knows the inside scoop and communicates it directly to the people in little bits and pieces, to prime everyone and steer the national agenda.

So Trump serves up the shot, and the Freedom Caucus jumps in to spike it! 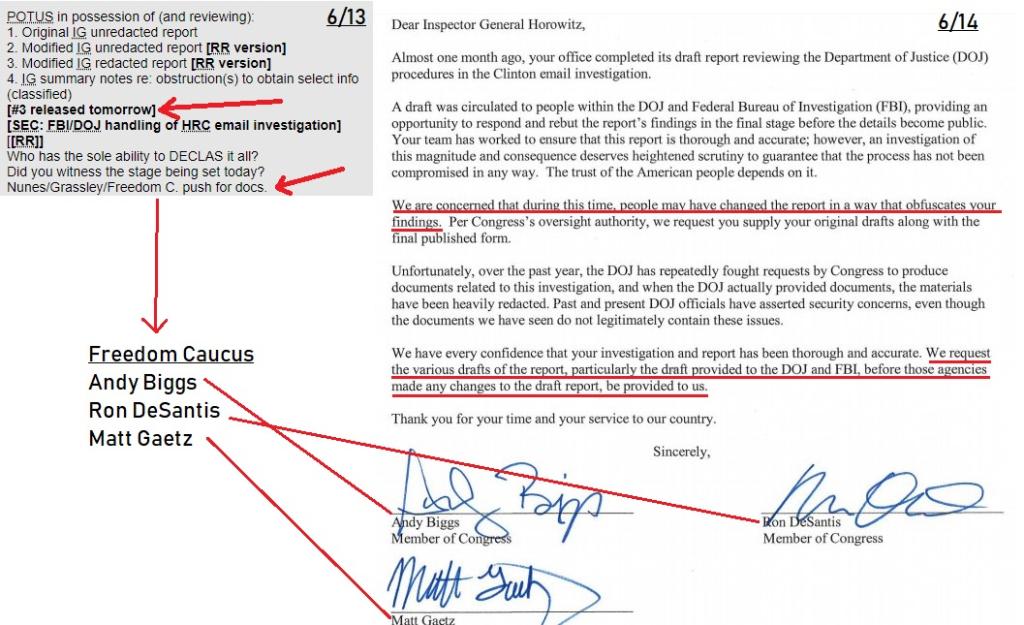 And this is why calling/emailing/and generally putting your congresscritter on blast is so important. Details on how to go about that are in here, along with sample scripts.

I was going to include a quick blurb here about the current state of the site, but instead, I’m including that at the bottom of this article, because these drops, though few, are explosive! I… 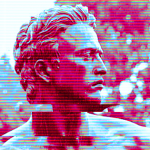 But sometimes it’s not always about what Q posts these days.

Sometimes, it’s about what he deletes.

Here’s a refreshing about their contents:

We’re going to focus on post 107 here because, well, 1:07 has already been listed as a Marker by Q himself. He first established “Dark to Light” as a future-proves-past proof, and then used the opportunity to use the timecode from the video Trump shows Kim Jong-Un as a specific marker. 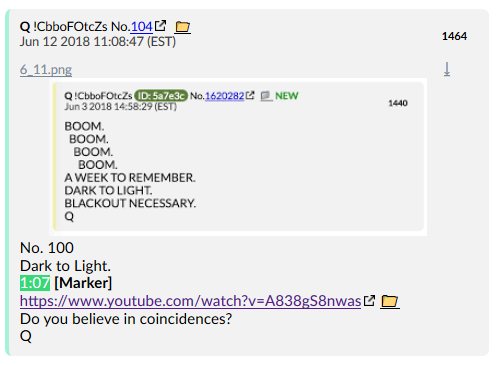 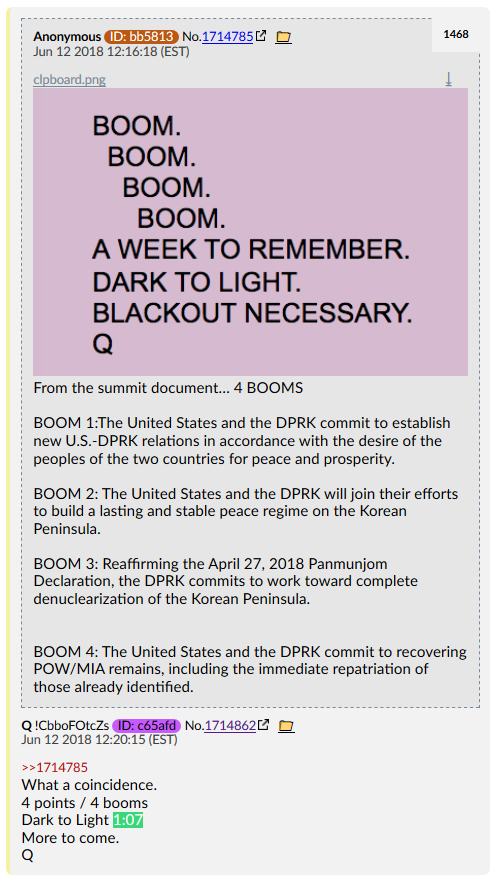 Why did Q pick this as a marker?

One anon has a theory:

And if you go back through the drops, you’ll see that the only post with a true 1:07 marker is this one, from December 4th: 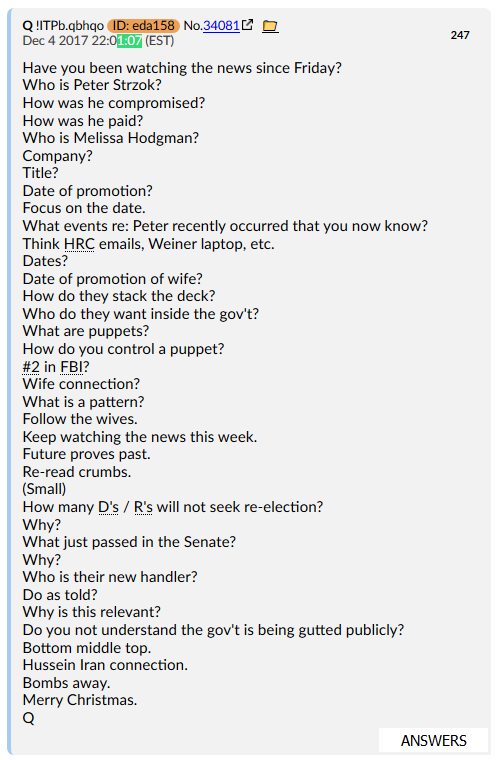 That seems… awfully relevant to the IG report, doesn’t it?

I’m not going to go in to dissecting all this, because its older. It’s been done to death. You can go to Qanon.pub and hit that little “answers” button you see in the bottom of the post, if you need to catch up.

But if you do that, you’ll see included in the answers, this story: 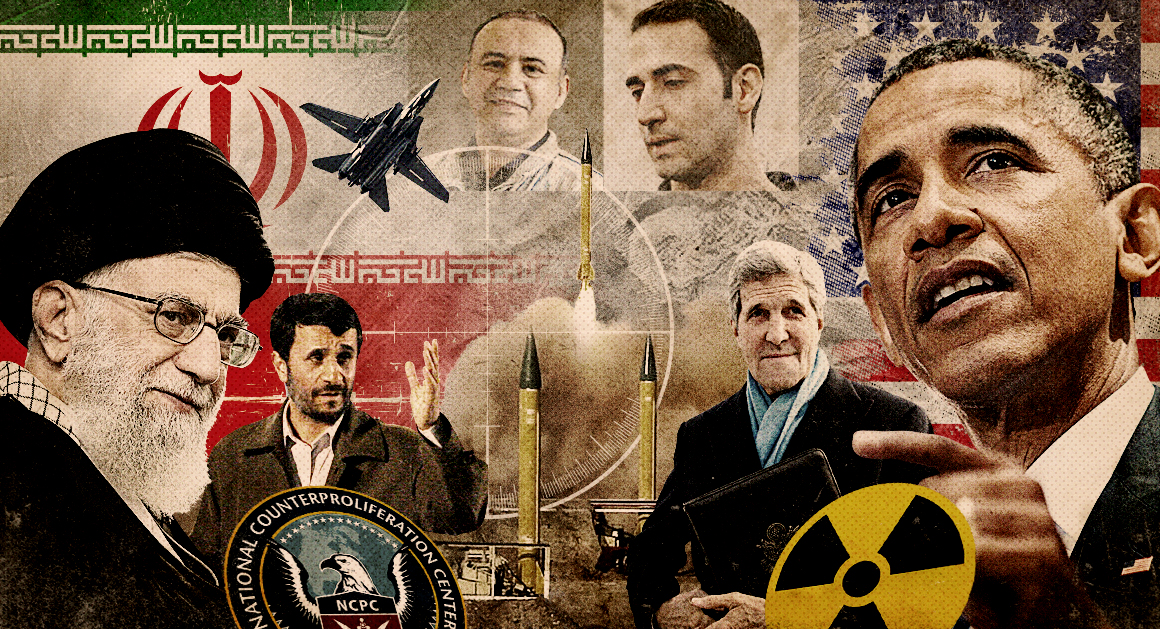 By dropping charges against major arms targets, the administration infuriated Justice Department officials — and undermined its own counterproliferation task forces.

In his Sunday morning address to the American people, Obama portrayed the seven men he freed as “civilians.” The senior official described them as businessmen convicted of or awaiting trial for mere “sanctions-related offenses, violations of the trade embargo.”

In reality, some of them were accused by Obama’s own Justice Department of posing threats to national security. Three allegedly were part of an illegal procurement network supplying Iran with U.S.-made microelectronics with applications in surface-to-air and cruise missiles like the kind Tehran test-fired recently, prompting a still-escalating exchange of threats with the Trump administration. Another was serving an eight-year sentence for conspiring to supply Iran with satellite technology and hardware. As part of the deal, U.S. officials even dropped their demand for $10 million that a jury said the aerospace engineer illegally received from Tehran.

Quick refresher of who she is (thanks to the anon who highlighted this, making my job that much easier): 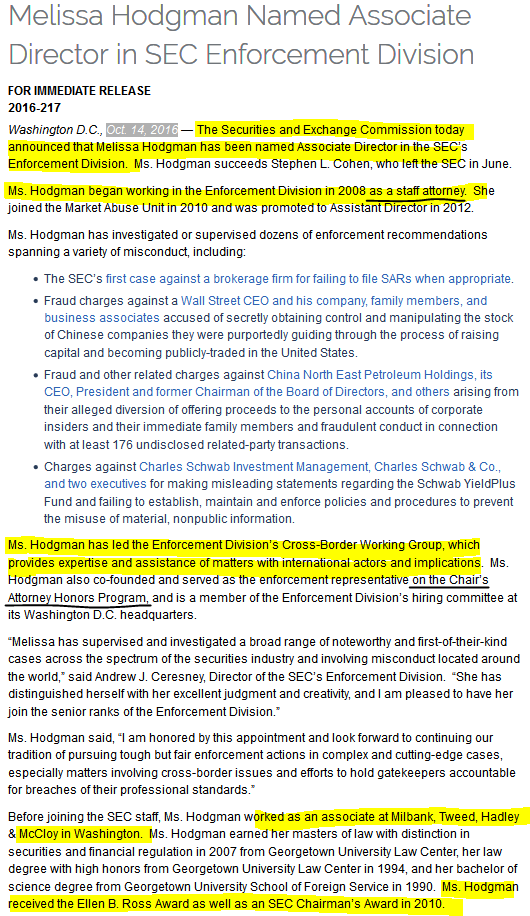 So the question is… Was Strozk’s wife Hodgman directed by Obama to let these Iranians off the hook for the explicit purpose of helping them manufacture ballistic weapons in Iran? She worked at the SEC since 08, after all, and specialized in the “assistance of matters with international actors and implications.” Was part of Strozk’s motivation in all this literal self-defense (even as he was cheating on his wife with Page)?

Guys, I’m not saying this is going to be part of the unedited IG report releases, which will occur down the line.

Much like Imperator Rex, I think this report is designed to launch multiple investigations. If you’re trying to knock down all those dominoes – Hillary, Obama, the Deep State – you need to be able to actually, factually demonstrate a connection.

Is this the actual angle they’re going for, here? Link Obama to terrorists who were tasked with helping Iran manufacture ballistic weapons?

Again, don’t get me wrong; we know he’s guilty of a LOT more than that, but I have to sit back and wonder if this will be the actual angle of attack white hats choose to lead with.

Anyway, if you’re disappointed by today’s IG Report, don’t be. This is a long, legal process – and I can guarantee, it will be over sooner than you think: 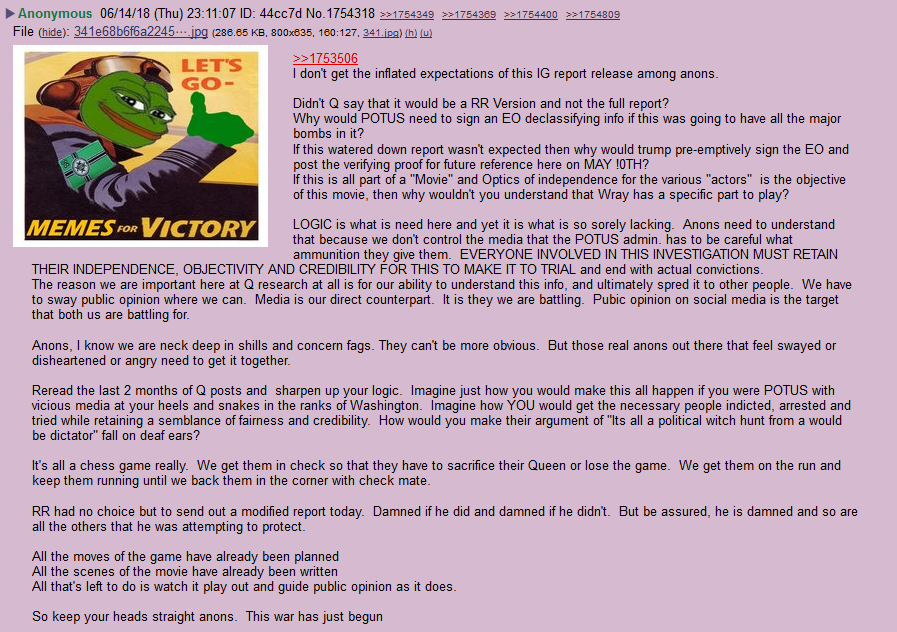 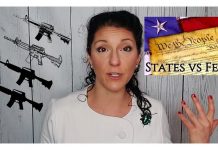