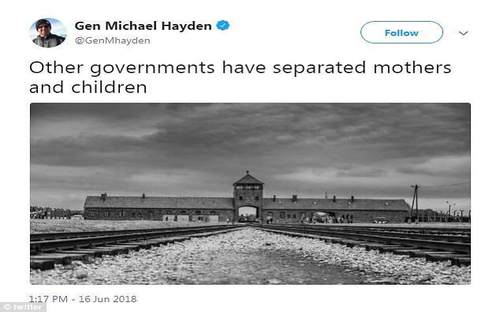 While here in the US, liberals and globalists are losing their minds over parents and children of immigrants being separated, perfectly exemplified in former NSA and CIA Director Michael Hayden‘s recent tweet comparing President Trump’s immigration policy to that used by the Adolf Hitler and the Nazi’s during the Holocaust, we’d love to ask Hayden when the last time was that he can remember an American citizen being imprisoned after carrying out a crime being allowed to bring their children with them to prison.

Sharing a picture of Birkenau in Aushwitz in his tweet and captioning it “other government’s separated mothers and children“, as Susan Duclos reported on ANP on June 16th, the mainstream media is desperately and intentionally pushing the ‘children in cages like a concentration camp‘ narrative in another attempt to distract the masses. Yet in this unfolding illegal immigration fiasco we get more proof that what was once called ‘conspiracy theory’ is indeed fact.

As we reported on ANP back in 2015, an unusual number of WalMart stores across the country were going to be closed down for what were called ‘plumbing problems’ and while back then we speculated that such huge stores could easily be used as makeshift ‘FEMA camps’, as the Free Thought Project reported back on June 8th, that ‘conspiracy theory‘ was proven as fact after Senator Jeff Merkley of Oregon was removed by cops from a Walmart in Brownsville, Texas that had been converted into a detention center.

As Jeremiah Johnson reported over at SHTFPlan just days later, “how do you like it, Senator, when the ‘deep state’ works against you?” Reminding us in his story that “what’s good for the goose is good for the gander“, how many more ‘conspiracy theories’ that were written about during the days of Barack Obama and George Bush were also actually ‘truths’ that the deep state and mainstream media never wanted us to find out about? From Johnson’s story:

There’s an old expression: “What’s good for the goose is good for the gander.” In this case, another old expression is even better: “Turnabout is fair play.” We are all still reeling from the Obama years of “transparency,” and “change you can believe in,” that both equated to Doublethink and Doublespeak. Under Obama, everything was hidden from the American people: Benghazi, Fast and Furious, Ukraine/McCain/Nuland, and the Arab Spring. Nancy Pelosi (on the several thousand-paged Obamacare legislation): “We’ll just have to read it after its finished to know what’s in it.” 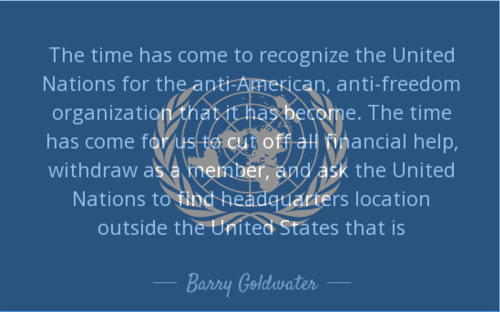 Yet each and every day, President Trump makes it clear that the days of Obama and Hillary Clinton are long gone and as we see in this new story over at the Western Journal that Steve Quayle linked to on his website on Sunday, President Trump and Nikki Haley are reported planning to stick it to the UN by withdrawing from the UN Human Rights Council, an absolute joke council that has been led in the past by wholesale violators of human rights such as China, Saudi Arabia, Venezuela, Libya and Cuba.

As Quayle mentioned in an SQnote he left while linking to that story, “in my opinion, the ‘UN is Beelzebub’s building block set’ and is totally anti-American and anti-Christian” and as we’ve previously reported on ANP, wherever the UN goes on their ‘peacekeeping missions’, all hell seems to immediately follow.

As the website Italian Insider reported back in October of 2017, a Swiss-based NGO protecting victims and whistleblowers of UN ‘peacekeeping missions’ called “Hear Their Cries” estimates there have been over 60,000 victims all around the world in a UN child rape epidemic that has gone on for well over a decade.

Claiming that the UN doesn’t effectively investigate nor prosecute perpetrators of child rape so UN employees act with impunity against children, the following sentence taking from their story is horrifying:

While British authorities have been warning since 1999 that predatory paedophiles are targeting children’s charities in the developing world to get access to children, to date the UN has not facilitated the prosecution of any of its staff members – even though the problem is perceived by many as huge.

With that statement echoing what we now see coming out of the UK with Islamic child grooming gangs being covered up and those who report upon it being imprisoned while all across Europe, women are no longer allowed to be ‘free’ for fear of triggering an assault, we’re not the least bit surprised that Breitbart recently reported that over 1,000 Europeans have been murdered or maimed by Islamic asylum seekers since 2014. 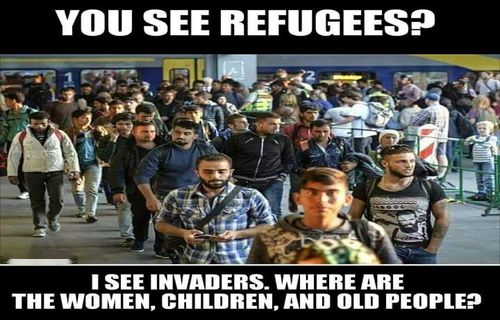 And with the globalists still using illegal immigration as a weapon of war against sovereign nations all across the planet, the awakening we’ve seen in European nations like Italy and Hungary recently show that there is hope with Hungary’s Prime Minister Viktor Orban claiming “The replacement of populations is under way in Europe, partly because speculators like George Soros can make large financial profits” as reported by Pamela Gellar in this new story.

The Daily Mail treats Hungarian Prime Minister Viktor Orbán in this article as if he were pushing some crazy conspiracy theory, but in fact, Orbán is exactly right. The inundation of Europe by Muslim migrants is Soros’ plan. His organizations work to bring these hostile invaders to our shores.

Clearly, Orbán is one of the few European politicians who is not owned by the black hand, Soros. If he is destroyed by Soros, the consequences could be catastrophic for Europe and the free world in general.

“Hungary’s far-right Prime Minister Viktor Orbán claims ‘replacement of populations is underway’ with mass migration because financiers want to profit from the ‘ruination of Europe,’” by Khaleda Rahman, Mailonline, June 14, 2018:

And as Daisy Luther the Organic Prepper reports in this new story, the European countries that are refusing to accept the unchecked flow of illegal immigrants continues to grow with Hungary and Italy joined by Slovenia, Austria, Poland, the Czech Republic and even Denmark discouraging would-be immigrants from entering. 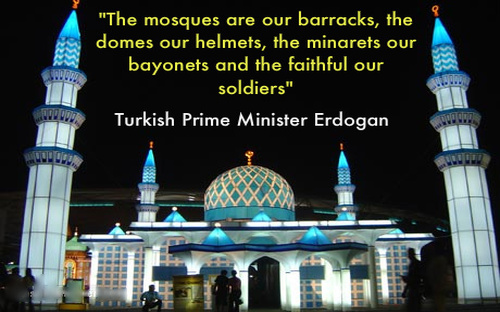 As President Trump recently told the G7, for many many decades the United States has been like the piggy bank to the entire world and the entire world has been robbing the American taxpayer blind. Why should American citizens fund globalists projects such as the building of mosques half a world away and in places where they’re either slaughtering Christians or using the mosques in the planning of future terror attacks against Americans or the West?