The economy has hit a wall and is now sliding down it. I don’t care what bullish propaganda may or may not be bubbling up in the headlines from the financial media and Wall Street, the hard numbers I look at everyday show accelerating economic weakness. The fact that my view is contrary to mainstream consensus and political propaganda reinforces my conviction that my view about the economy is correct.

As an example of the ongoing underlying systemic decay and collapse conveyed by this week’s title, it was announced that General Electric would be removed from the Dow Jones Industrial Average index and replaced by Walgreen’s. GE was an original member of the index starting in 1896 and was a continuous member since 1907.

GE is an original equipment manufacturer and industrial product innovator. It’s products are used in broad array of applications at all levels of the economy globally.  It is considered a “GDP company.” GE was iconic of American innovation and economic dominance. Walgreen’s is a consumer products reseller that sells pharmaceuticals and junk. Emblematic of the entire system, GE has suffocated itself with poor management which guided the company into a cess-pool of financial leverage and hidden derivatives.

As expressed in past issues (the Short Seller’s Journal), I don’t put a lot of stock in the regional Fed economic surveys, which are heavily shaded by “hope” and “expectation” metrics that are used to inflate the overall index level. These are so-called “soft” data reports. But now even the “outlook” and “expectations” measurements are falling quickly (see last week’s Philly Fed report). The Trump “hope premium” that inflated the stock market starting in November 2016 has left the building.

Something wicked this way comes:  Notwithstanding mainstream media rationalizations to the contrary, a flattening of the yield curve always always always precedes a contraction in economic activity (aka “a recession”). Always. Don’t let anyone try to convince you otherwise. An “inverted” yield curve occurs when short term yields exceed long term yields. When the yield curve inverts, it means something wicked is going to hit the financial and economic system.

Prior to the financial crisis in 2008, the yield curve was inverted for short periods of time during 2007. The most simple explanation for why inversion occurs is that performance-driven capital flows from riskier investments into the the longer end of the Treasury curve, driving the yield on the long end below the short end. The expectation is that the Fed will be forced to cut short term rates drastically – thereby driving the short-end lower, which in turn pulls the entire yield curve lower (the yield curve “shifts” down). This gives investors in the long-end a better rate-of-return performance on their capital than holding short term Treasuries for safety. The Fed’s dilemma will be complicated by the fact that it does not have much room to cut rates in order to combat a deep recession.

Studies have shown that curve inversions precede a recession anywhere from 6 months to 2 years. I would argue that, stripping away the affects of inflation and data manipulation, real economic activity has been somewhat recessionary for several years. The massive intervention in the Treasury market by the Fed, ECB and Bank of Japan has muted the true price discovery mechanism of the Treasury curve. The curve has been barely upward sloping for quite some time relative to history.  This could indeed be history’s equivalent of an inverted curve. That being the case, if an inversion occurs despite the Fed’s attempts to prevent it, it means that whatever is going to hit the U.S. and global financial and economic system is going to be worse than what occurred in 2008.

2A Revolution: The Number of Concealed Carry Licenses Issued in Ohio Almost Doubled In 2020 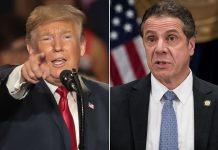