Here is what I have been able to gather, from reading Steve St. Angelo’s website, www.srsroccoreport.com:

Suppose you have the opportunity and the means to create a gold mine, and decide to undertake the challenge; you invest in the building and installations of the gold mine, and in all the related salaries to carry out the building of the mine, by paying for all expenses in gold; finally the gold mine is selling the gold it produces, in exchange for dollars. So now you have an abundant income in dollars, because your mine has been a successful venture. Hurray!

But think about this: when you get those dollars of income from your mine, are you really registering profits?

It seems to me that in fact, you could really only say that your mine is “profitable”, when it has returned to you, in full, the weight of gold which you paid out to build it.

Whatever comes to you – in gold, mind you – after your investment has been returned in full, then – and only then – can you truly say you are profiting from having built a gold mine.

This is looking at a mining venture, from the point of view of GROI: “Gold Return On Gold Invested”.

The petroleum business is somewhat similar to the business of mining gold; the difference is that in the petroleum industry, producers do not invest in gold; they invest in energy; the energy invested takes the form of enormous quantities of highly specialized machinery to produce, transform and transport the oil. That machinery represents huge volumes of energy that were expended in building machinery and installations, as well as in transporting and transforming the petroleum, to obtain the final energy provided by the oil coming from the oil wells.

The petroleum business should also be considered and evaluated, from the point of view applicable to gold mining: EROEI, or “EROI” for short:

Needless to say, this Thermodynamic evaluation of the Petroleum Industry is totally ignored by today’s financial analysts.

In the glory days of the Texas Oil Boom, early 1900’s, it took a minimum amount of dollars to set up an oil rig. Men became millionaires overnight, thanks to the very high EROI: small investments in energy (in the form of equipment) produced enormous volumes of crude oil. In Mexico, in the region of the Gulf Coast near the town of Poza Rica, before the oil boom began, there were areas which could not be cultivated because of the puddles of oil on the ground!

The enormous advantages that petroleum offered as a source of energy, caused great growth in the Petroleum Industry, but as time went on, the Industry’s healthy financial state of affairs began to deteriorate.

The Oil Boom gave a tremendous boost to the industrialization of the US.  The automobile industry became gigantic. The Oil Boom required massive investments, because EROI was no longer what it was in the days of the Texas Oil Boom – it had begun to decline.

In the year 1900, according to a graph provided by Steve St. Angelo (see below) the Net Energy Available for GDP Growth, per barrel of oil, was about 61% of the total original energy in each barrel, after subtracting unavoidable Waste Energy, and Energy Costs of Production; by 2015, that figure had fallen to only 8%. In 2030, the Net Energy provided by the Petroleum Industry is forecasted to be – 0%!

The Oil investments of early days – as I judge – were likely financially solid and reasonable, and it was within the capacity of the Oil Industry to retire Bond Debt and pay Dividends from current income.

What happened to the finances of the Oil Industry? Why was it not able to price its product high enough to give reasonable cover to its Bond and Dividend obligations? The Oil Industry is vast and world-wide: it does not appear likely that it could have been subjected to price-controls on the part of governments. 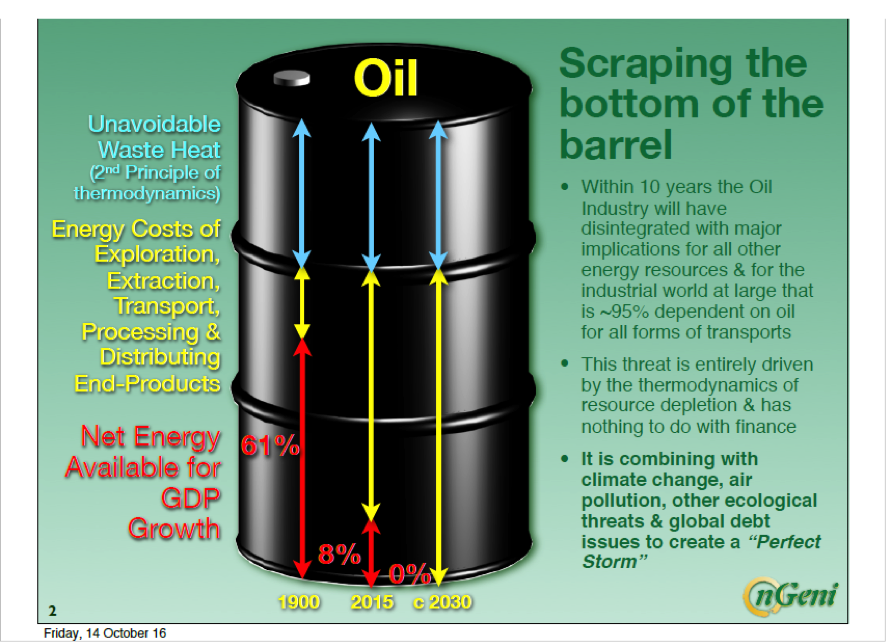 The “thermodynamic thesis” provides an answer to the question.

According to the thermodynamic thesis, the price of oil has not been able to rise to make good the financial promises of the Oil Industry, simply because the productivity of the world has been insufficient to allow payment of higher prices.

As simple example of what has taken place: If you have a job that requires driving 100 miles a day to and from your place of work, there comes a point where a rise in the price of gas makes it impossible to afford the gas to get to and from your job. You leave that job, and get another less-preferable job nearer home; you cannot afford the 100-mile daily journey, because your job is not productive enough to cover that expense.

Multiply this example by several million times, and you see why the price of oil cannot rise to the point where it makes the Oil Industry financially viable: the productivity of nations places a limit on the price which can be paid for fuel.

The Indians who live in the peaks of the Andes in South America come down to the local towns with their docile llamas as beasts of burden. Of course, they cannot own a truck, however cheap. Their productivity is so low, they cannot afford the vehicle or the gas to power it.

The prices of gasoline and other fuels, that would have been required to keep the Oil Industry in reasonable financial shape, have not been able to rise to the much higher level that would have been necessary for the petroleum industry to remain in a sound financial condition. However, it has been  politically necessary to have ever-greater volumes of cheap energy available to the public and to the industry serving the public. Politically, there has been no option but to continue to provide fuel at prices that cannot sustain the Oil Industry in a financial sound condition.

At the present time, it is unthinkable that the Oil Industry may pay off its debts and pay dividends from the income from sales of oil products. Those who receive redemption payments on their previous Bond investments, and do not re-invest, are doing the right thing.

The world’s Oil Industry – including Shale Oil – is increasing its investments in production of petroleum by borrowing utterly vast sums of money to purchase the physical installations created by burning the very same Oil it is producing: all the machinery and massive installations for drilling, transporting and transforming oil into usable products – all these massive installations require the consumption of energy in their creation and use. The Balance Sheets and Income Statements of the Oil Industry reveal a situation of bloated debt with an increasing need to borrow.

Can we understand what is going on? Perhaps.

We see massive borrowing on the part of an Oil Industry that will not be able to retire its debt. Public Relations and fiddling with numbers, allow the Oil Industry to retain the confidence of the investing public, which is unaware of the dire financial condition of the Oil Industry.

When you invest in what is going to be an unsuccessful financial venture, you lost money the moment you invested – not when you finally acknowledge the loss!

The losses to the public, when the Oil Industry finally goes belly-up, will then be seen as devastatingly huge – but those losses have already been incurred,  and are increasingly being incurred at the present time.

When the day of reckoning comes, it will then be seen that the US Oil Industry was bleeding the wealth of the US by marketing irredeemable Bonds and paying Interest when there were no real profits registered. The huge losses have been on-going, but have not been acknowledged  – yet.

I have a short tale to illustrate the situation:

“Once upon a time, a family lived in a grand house on a large estate.

“The house was in a cold climate, and required a massive fire in the living room. When the family first moved in, there was lots of old firewood lying around in the woods. This was gathered to feed the fire. When that dead wood was gone, there was no other way to keep warm, but to cut down a tree or two. This went on until the estate had no more trees.

“Then the father of the family decided to close off a bedroom, and tear it down for firewood. That kept the family warm for some time. But then it was necessary to burn down another room, and later another, and another, until there was only the fire in the living room; finally that went out for lack of firewood.

“So the family had to move to a warmer climate, and in the process of moving, many of the family died of cold.”

That is a picture of the world today: it is burning its wealth – its Capital – to keep things going as they have been. The Oil Industry is impoverishing the population of the US – bad debt is a loss the moment it is issued, not when it becomes evident that it cannot be paid – but the population is not aware of this, as yet. The soaring debt of the US, is a mirror-reflection of the contracting volume of Net Energy available to it.

The energy consumed by the world’s population is coming out of what we might call the cannibalization of the world’s wealth.

Such is the condition of our world, with regard to Petroleum. The energy from oil will cease to flow someday: petroleum is a finite, non-renewable natural resource. Perhaps that may happen sooner than we think due to a financial collapse, which will make evident that we have been deceived as to the duration of the Petroleum Age.

The world will not end, with the end of the Petroleum Age, but the world will come to rest at a drastically lower level of energy consumption.  The ancient means of survival: farming and raising animals, and simple commerce, will once again provide for humanity’s needs, albeit for a much reduced number of humans.  Coal will be there – but that too will require machinery,  and the Oil energy to build that machinery will not be there. The miserable ponies of coal mining in 19th Century England, that lived out their lives in the dark mines, come to mind…

What is done is done; there is no turning back the clock.