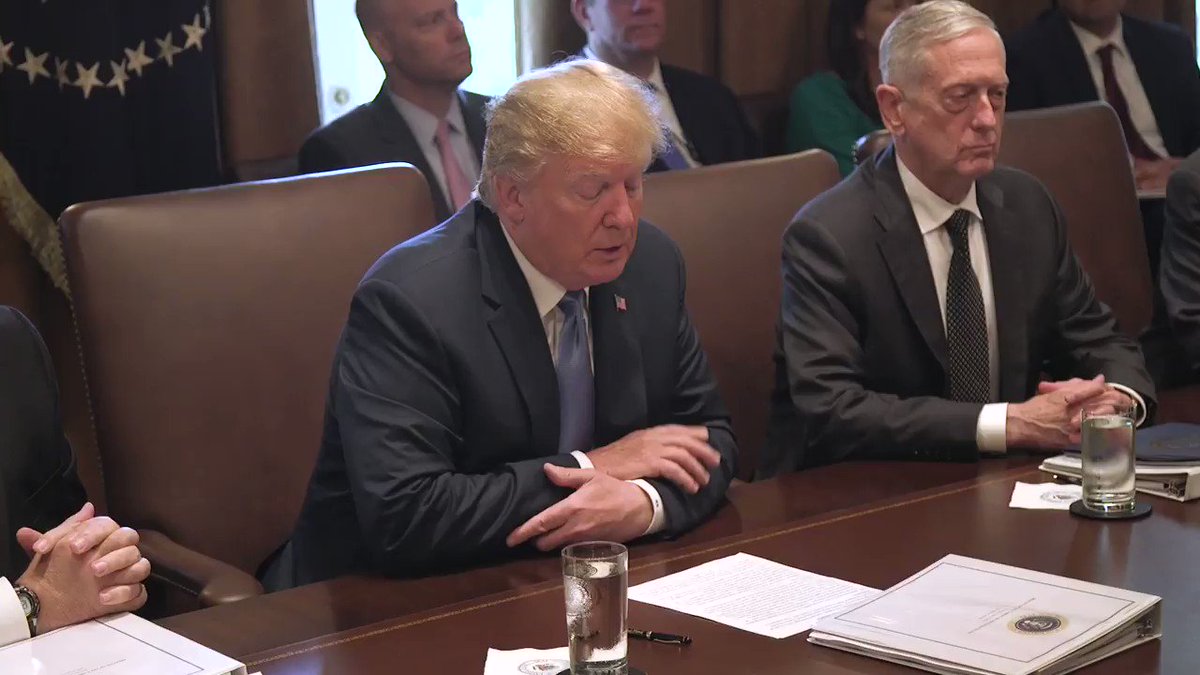 I was hoping for more #QAnon posts before I got into these drops, but we’ve actually got a lot to talk about today, so let’s tackle the existing drops real quick first, and then delve into a very important related subject right after: 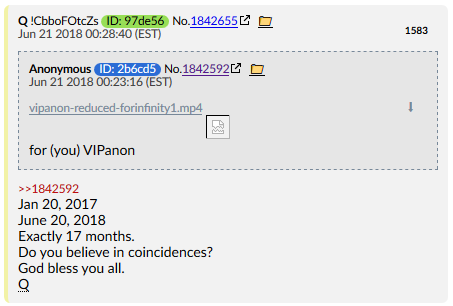 Remember, 17 = Q. And that video link that’s not showing up? I backed it up here: 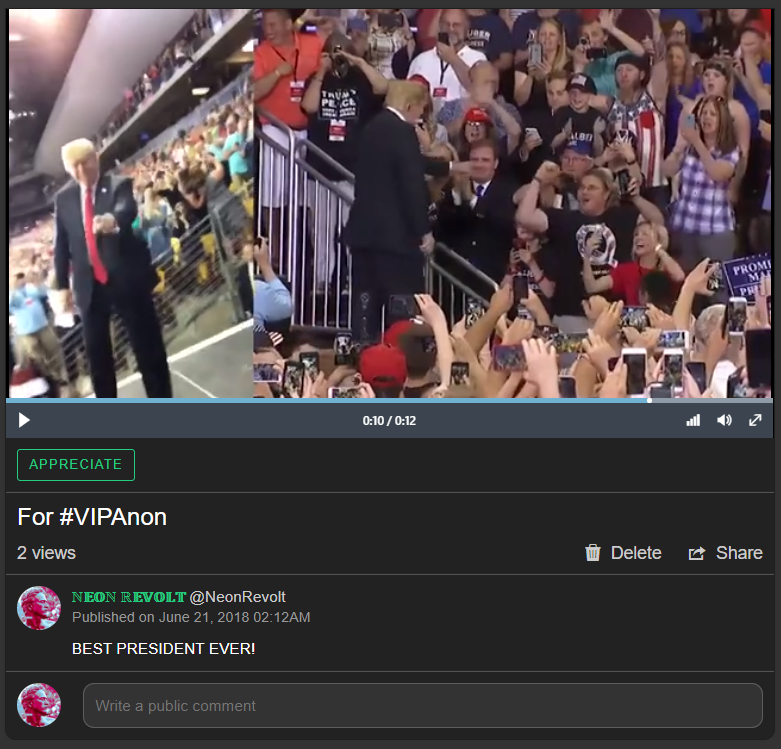 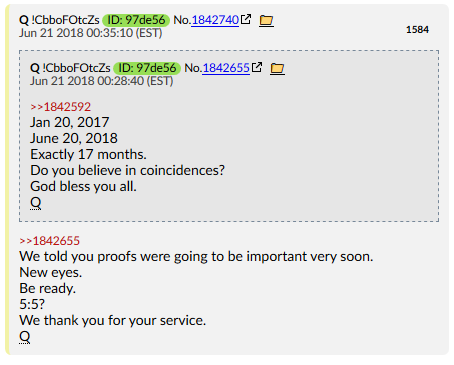 Proofs are going to be very important not for us, the “True Q Believers,” but for the huge swath of the population that’s going to be encountering Q for the first time in the very near future. The “new eyes” as Q calls them. The parallel construction is pretty much complete at this point. It’s time for the nation to switch narratives.

I don’t know about you, but in real life I’ve started to confront Leftists with some of the information Q has dropped – and it’s like watching their minds short-circuit in slow motion. You can almost see the sparks shooting from their ears.

Because what are they going to say? What are they doing to say when they’ve gone on and on and on about Trump separating children from families, only to be confronted with a picture of Hussein and “Wendy?”

What are they going to do when they talk about these so-called “detention camps” when you suddenly confront them on the child trafficking being perpetrated by the Clinton Foundation in Haiti?

The average, everyday lefty-pleb thrives on a sense of moral superiority, which then “justifies” their outrage and any subsequent actions they take (at least in their own minds).

Because if it’s one thing that doesn’t deserve outrage, it’s ignorance.

What I’m talking about here is a simple pressure flip. Flat out tell them that they don’t know what they’re talking about; that they’re poorly informed, and easily manipulated. Yes, make them feel stupid AND ashamed for their stupidity. You’re not being “mean” by doing this. You’re being honest, and you’re fighting for the country. For too long, anyone remotely “Conservative,” anyone remotely on the “Right” has been told they must always play defense. Not so! You are better informed, better educated, and can fight back. I’d argue you have a moral imperative to go on the offensive, and leave your target a blubbering, incoherent mess, riddled with cognitive dissonance and self-doubt. That’s exactly where you want them right now. You want to burst their hugbox bubble, because that’s the only way to get them to reflect upon their errors and correct it. You don’t want them marching down the streets, participating in some Mockingbird-driven riot, causing more chaos.

And at the end of this article, I’m going to go into some talking points that may help you go on the offensive. 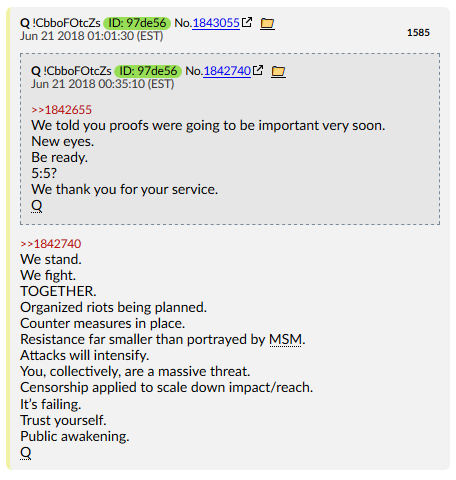 Trump literally changes the policy, and they still want to march.

This is why it’s important to BE LOUD right now. Harp on the EO. Harp on the human trafficking issue (more on that in a moment). 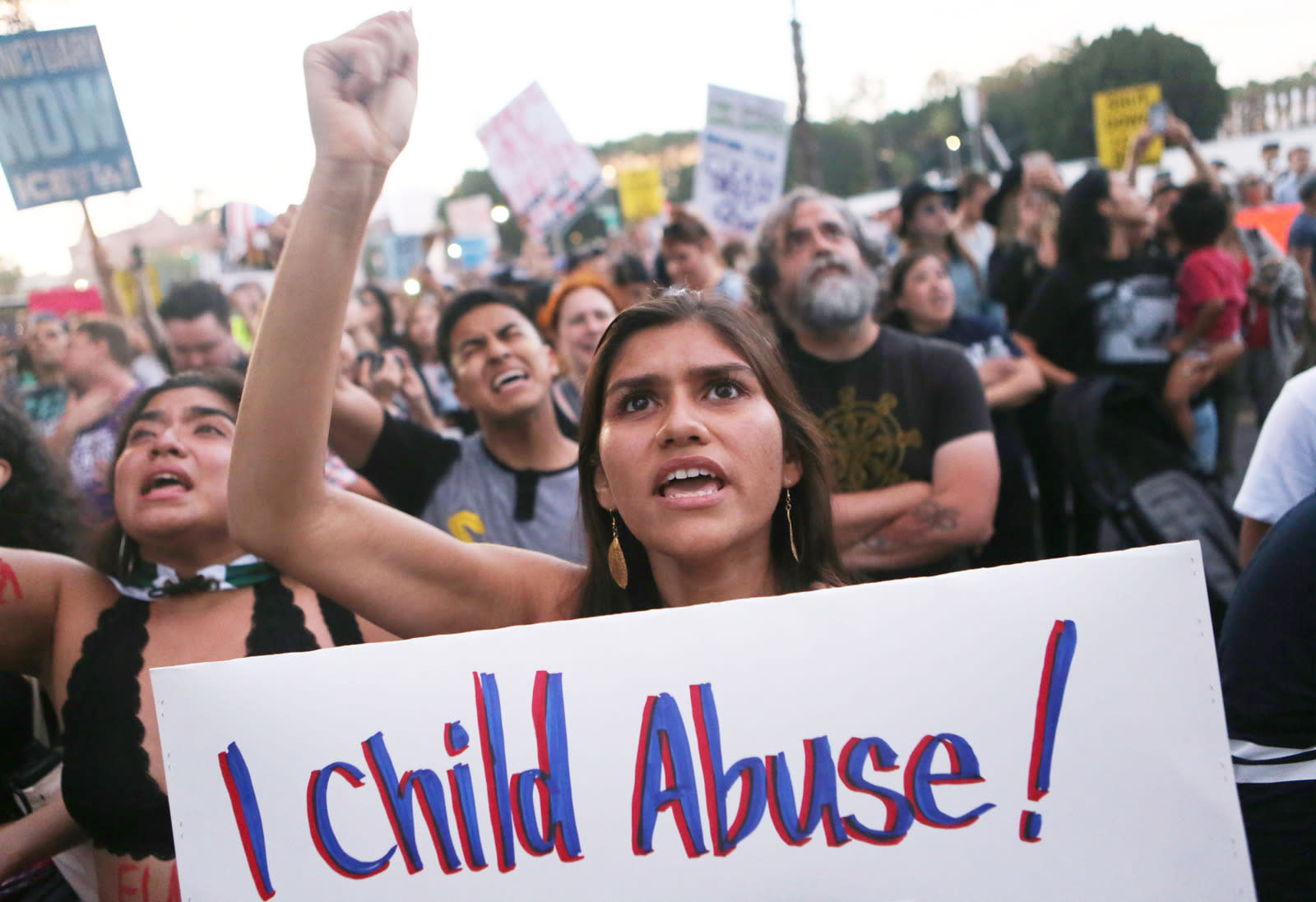 On June 30, cities across the country will protest the Trump administration’s “zero tolerance” policy. 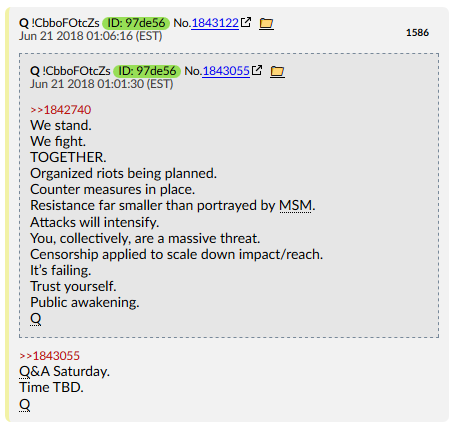 Think about what you’d like to ask Q on Saturday. I’ve got a few questions in mind. We’ll see if he answers them.

But what I want to propose, to help facilitate this Nationwide Narrative shift, is getting Qpeeps to start talking, very publicly, and very loudly about the situation at the border Trump is trying to resolve; namely, the human trafficking loopholes that have long been exploited by organized crime and predators.

I talked about this a bit with this #CDAN from the other day; that’s it’s not even just illegal immigrants coming on their own, but evil individuals in the US as well, bringing these minors across the border in order to abuse them: 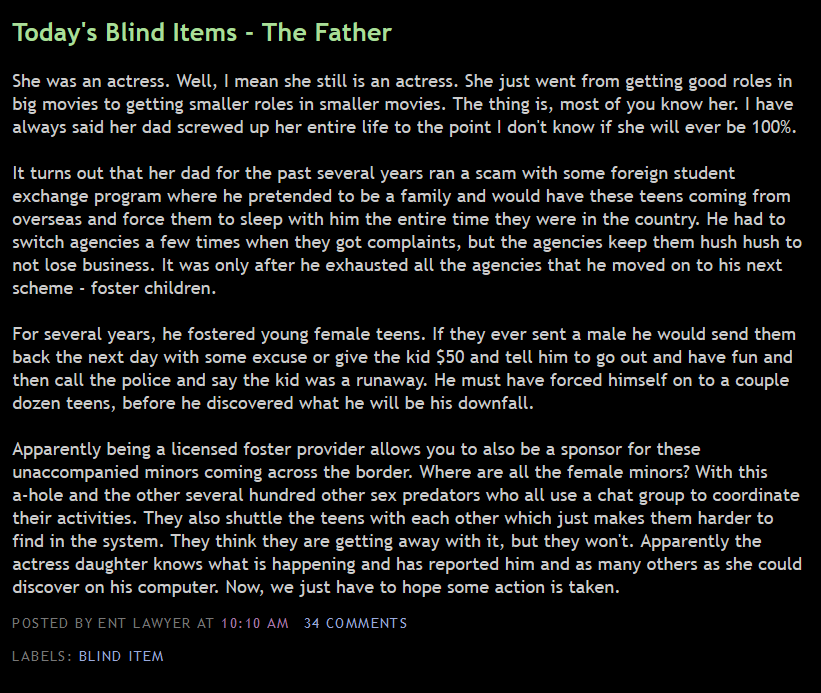 But Trump launched a salvo in this direction today, too:

[The Democrats] have created, and they’ve let it happen, a massive child smuggling industry. That’s exactly what it’s become. Traffickers. Now you think about this: Human traffickers are making a fortune. It’s a disgrace. These loopholes force the release of alien families and minors into the country when the illegally cross the border. Since 2014 alone, nearly 200,000 unaccompanied alien minors have been released into the United States as a result of Democrat-backed loopholes, including “Catch and release” which is one of the worst.

These echo the sentiments of AG Sessions, from just two days ago:

Jeff Sessions: We don’t want to separate parents from kids

And these children are well cared for. In fact, they get better care than a lot of American kids do. They are provided plenty of food, education in their language, health and dental care, and transported to their destination city — all at taxpayer expense.

In total, HHS is spending more than one billion taxpayer dollars a year providing quality care.

Separations are temporary and rare. The vast majority of children in custody came to this country by themselves.

Many unaccompanied children have been abused by smugglers or recruited by criminal gangs such as MS-13. There is nothing humane about encouraging human trafficking — but that is what open borders policies do. Everything the Trump administration is doing is helping put traffickers out of business.

But the situation has gotten so bad, some parents are sending their young daughters – as young as 12 – over the border with a “Plan B” prescription.

Rape is no longer just a threat; it’s the norm:

Some Illegal Immigrant Children Bring Plan B in Case of Rape

“We see these kids getting abused on the Mexican side,” Agent Hector Garza (shown above, center) told Fox News host Laura Ingraham on “The Ingraham Angle” Tuesday night. “We know that some of these female children that come across — their parents send them with Plan B medication because they are expected to be raped along the journey coming through Mexico and Central America.”

How utterly horrifying is that?

The situation is so bad, Sessions has proposed using DNA tests to determine the familial status of all these immigrants coming over. After all, if you’re a trafficker posing with a minor, claiming them as your “child” when they’re really not, the only way to find out is something like DNA:

“Sessions is talking to congressional members and is hoping for a legislative fix. The AG wants an immigration policy that is just, fair and enforceable. They talked about making sure that these really are the parents of these kids,” Perkins said.

He continued, “They are looking at how to use DNA tests in the field to verify they are parents and not traffickers. The reality is if American parents put their kids through what these immigrant parents have done to their kids — they would be charged with child abuse.”

Around 12,000 children are currently in the custody of Health and Human Services after entering the United States. According to Department of Homeland Security Secretary Kirsten Nielsen, 10,000 of the 12,000 children in the care of HHS arrived in the U.S. as unaccompanied minors.

“We know for a fact that a lot of adults taking children along are not related to them. [They] could be muggers. They could be human traffickers. It’s a very unhealthy dangerous thing and it needs to end. We need to return to a good lawful system,” Sessions told Perkins on his broadcast.

#Anon has this to add to the subject today: 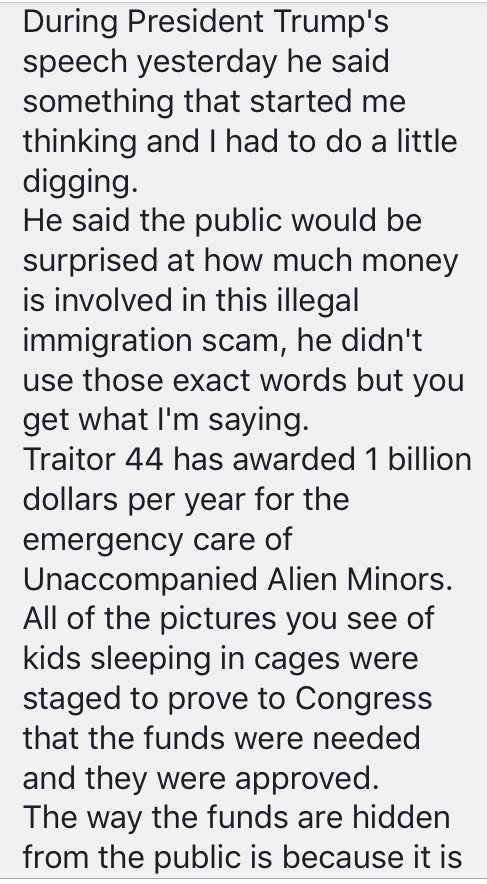 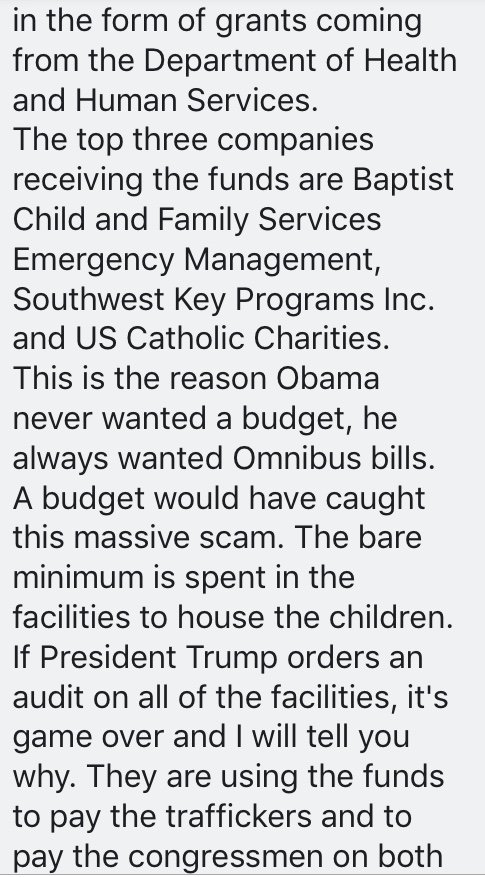 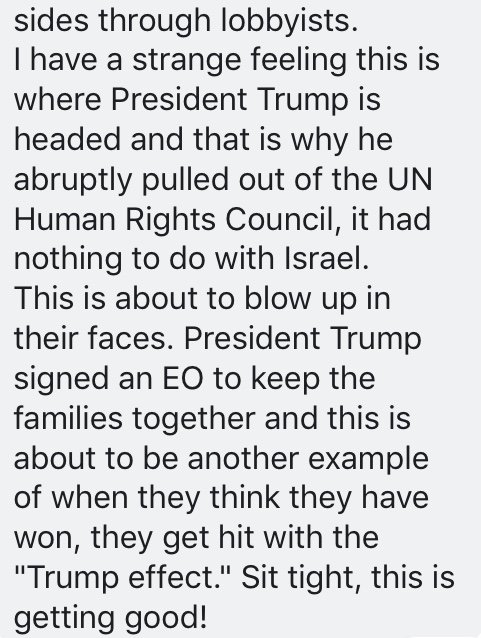 Connecting to that, the Obama Administration was actually being sued for the conditions in which they left the children and invaders:

‘Deprived of beds, bedding, and sleep …’

The American Immigration Council published photos of the conditions in the Obama-era facilities. The images show dozens of illegal immigrants being held in crowded, filthy cells. There are no beds or mats for sleeping, with many of the migrants sleeping on a packed floor in a head-to-toe arrangement. Other images show mothers changing the diapers of their children on the cold concrete floor. Others show garbage piling up in the cells. Many images picture children living in these conditions.

Amazing how no Leftie was complaining about this when Obamessiah was in office.

On top of all that, RightSideNews identified the connection between Southwest Key Programs Inc. and La Raza years ago, going so far as to call it “the Hispanic ACORN.”

Are you curious who has been facilitating the transport of illegal alien children throughout the country? Look no more… meet La Raza connected Southwest Key Programs. This organization is the pipeline for the children into

Their specialty is reunifying illegal minors with their families. They are the underground railroad for the American invasion from the South. They are nationalistic in their connections and leadership. Heavily connected to the La Raza Roundtable, don’t be fooled by the charitable facade. This is a radical breeding ground. They are militant, Latino community organizers.

And let’s not forget that recent incident, involving a “mother” and her down-syndrome child.

Illegal Immigrant Separated From Child With Down Syndrome, Detained As Smuggling Witness

U.S. officials set the record straight by stating Wednesday that the family was separated because the mother might be a criminal smuggler.

“This smuggler has a criminal history including a flight, escape, aiding and abetting making it important that we prosecute,” the Customs and Border Patrol statement reads.

Whoops! Did I say “mother?” I meant criminal smuggler.

So yeah, point is, the border is all about child trafficking.

And if you need more evidence, Anon linked this story today: 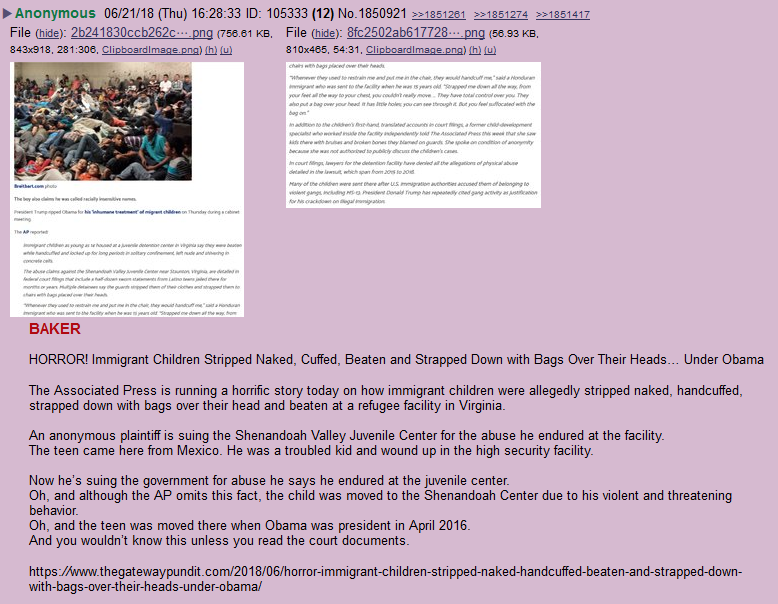 Of course, I have to repost the story I posted just yesterday: Guys, this isn’t some accident. These conditions aren’t just some unfortunate twist of fate that would simply resolve itself if we just pretended the border didn’t exist, and handed our homes over to every third-world invader.

No, this is systematic and intentional. The Democratic Party (and many corrupt Republicans) facilitated child trafficking and abuses for years – for their own nefarious purposes. This all leads back to them, and their sick perversions.

And these sick mongoloid maggots want to rape children, and have the audacity to call you a “racist” for standing in the way, and send their oh-so-not-bigoted, brainwashed footsoldiers to your cities and towns to cause destruction to show… how much more progressive and open-minded they are than you “bigots.”

This is why the Lefties are in panic mode. They know this leads right back to them and their crimes, and they are desperate to escape justice. They’re sending the #MockingbirdMedia into propaganda overdrive. They’re planning protests and riots nationwide. They’re pulling out all the stops and why? All to cover up their crimes and maintain their insidious status quo.

But did you catch Melania rejecting a deal today? 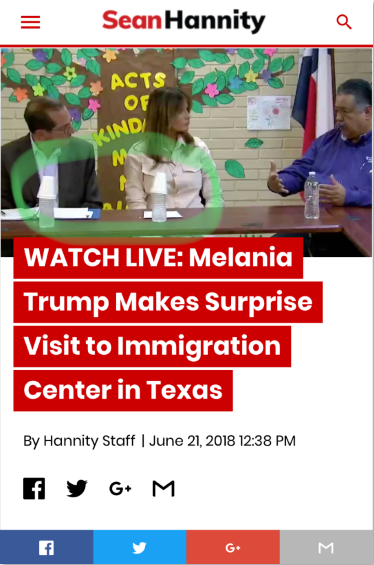 That’s right; she visited an Immigration center and refused to be photographed until that water bottle was in front of her, with the cup on top of it.

We’re cutting off the traffickers, building the wall, and by the end of it, we’ll be tagging and bagging you scum. Don’t be afraid of these evildoers. You don’t have to fear them. They have to fear us! Thunder and roar for REAL JUSTICE! SPEAK OUT, UNAFRAID! The time to stand up is NOW! The Narrative Shift happens when YOU say it happens!