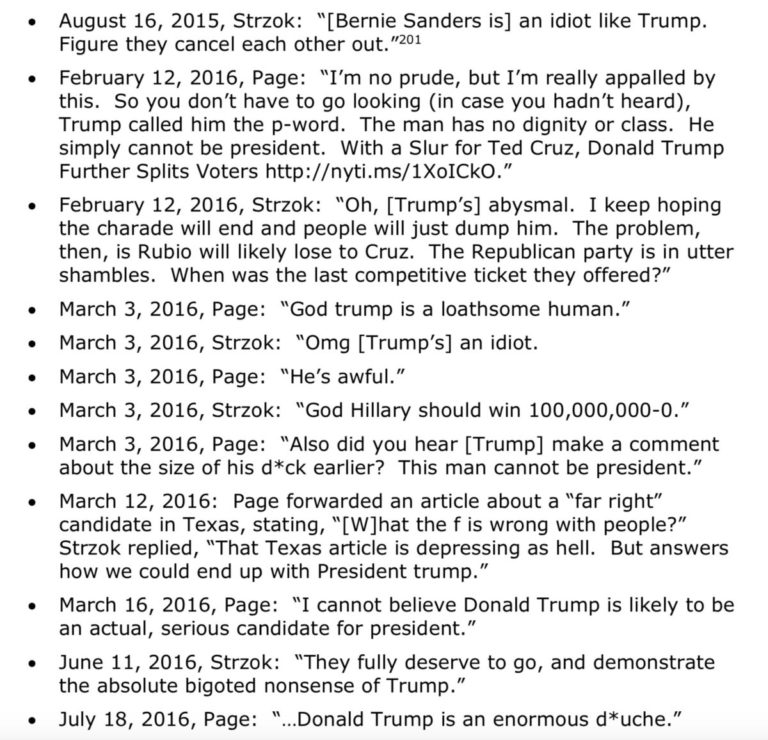 “We hang the petty thieves and appoint the great ones to public office.”

Your average mass media pundit regularly decries the fact Americans no longer have trust in the country’s institutions, yet simultaneously refuse to take any sort of responsibility for the situation. Government bureaucrats and other assorted supporters of our decrepit status quo tend to do the same thing. As is typically the case, I’ll take the other side.

Not only do I think it’s completely sane for Americans to have zero faith in their institutions, including but certainly not limited to the three-letter agencies, Congress and the Federal Reserve, I’ll take it a step further and argue we as citizens remain far too naive and trusting for our own good. If nothing else, the recent Justice Department Inspector General’s (IG) report on the FBI’s investigation of Hillary Clinton’s email server should underscore the point.

First, there’s the now infamous text exchange between between Peter Strzok and his mistress Lisa Page. The following excerpt is from the Executive Summary of the IG report:

We were deeply troubled by text messages exchanged between Strzok and Page that potentially indicated or created the appearance that investigative decisions were impacted by bias or improper considerations. Most of the text messages raising such questions pertained to the Russia investigation, which was not a part of this review. Nonetheless, when one senior FBI official, Strzok, who was helping to lead the Russia investigation at the time, conveys in a text message to another senior FBI official, Page, “No. No he won’t. We’ll stop it” in response to her question “[Trump’s] not ever going to become president, right? Right?!”, it is not only indicative of a biased state of mind but, even more seriously, implies a willingness to take official action to impact the presidential candidate’s electoral prospects.

This isn’t merely an expression of bias from some low-level agent, these are the words of a very senior employee of the FBI (who played a leading role in the Clinton email investigation and the Russia probe) implying that he, and presumably others, were willing to interfere in the political process to ensure Trump wouldn’t become president.

Things get even more interesting when you take a look at some additional texts between Strzok and Page highlighted in the IG report: 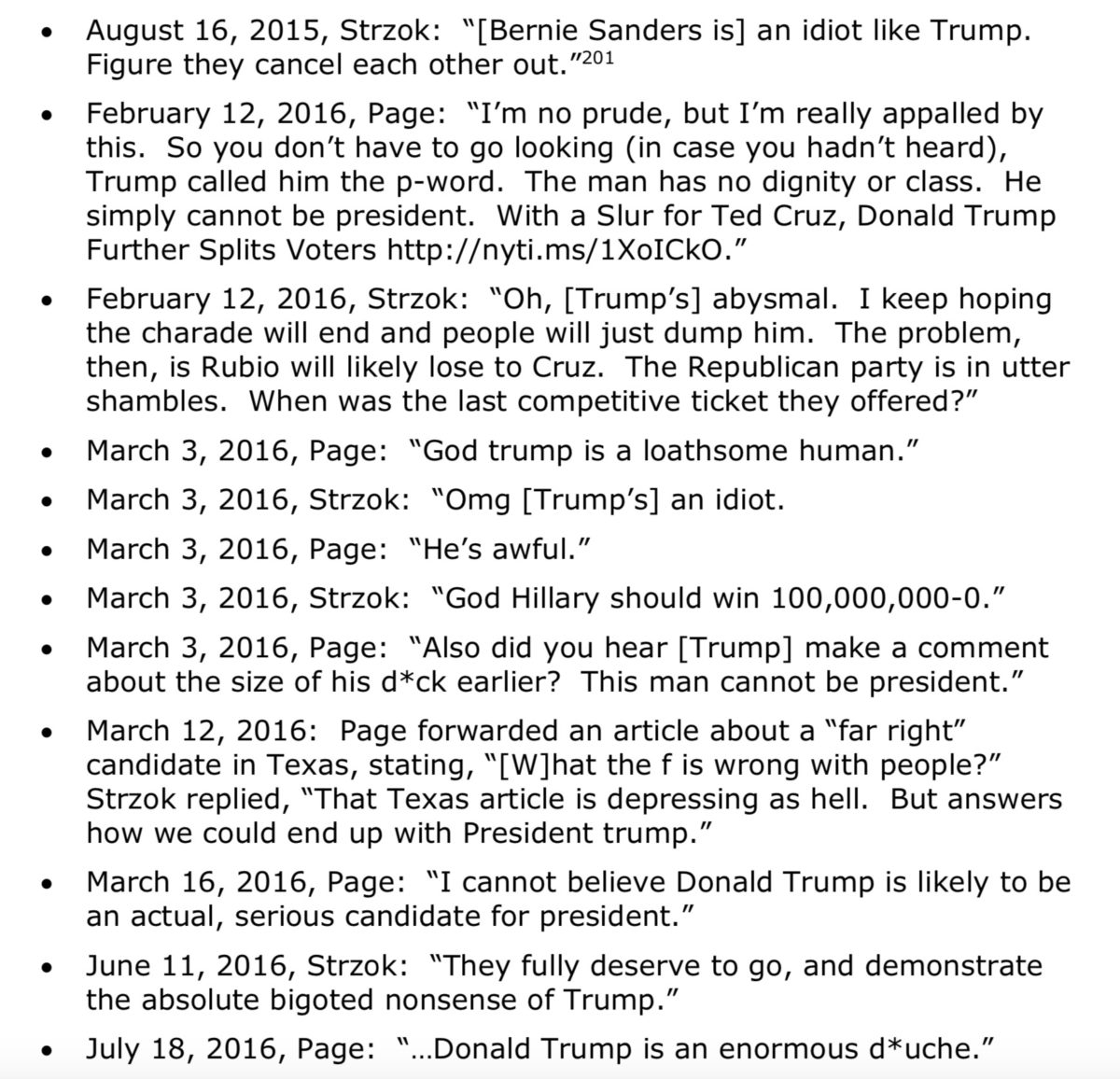 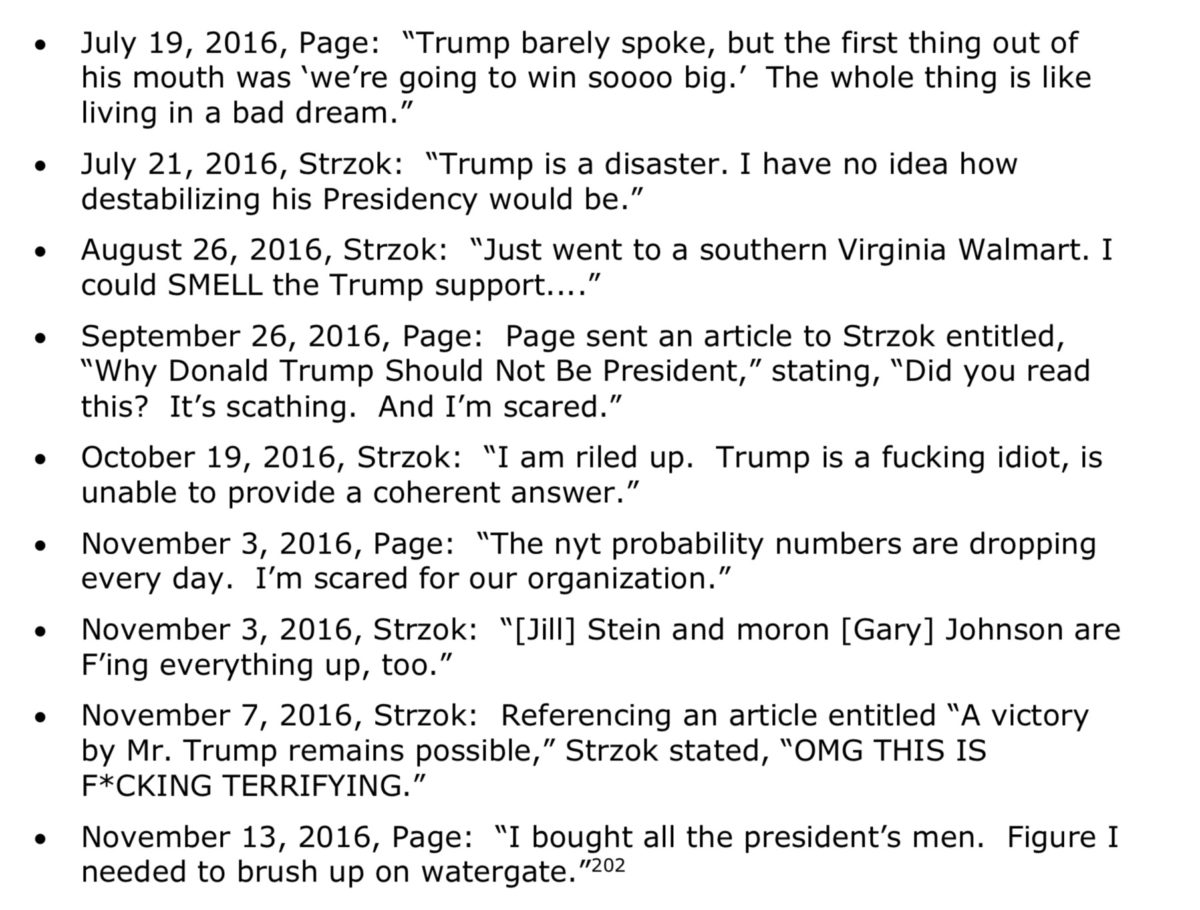 There are two key takeaways from the Strzok-Page texts. First, we see that the lead FBI investigator on both the Clinton email and then the Russia probe expressed a willingness to act in order to prevent Trump from becoming president. Second, we see that this same person also expressed enormous contempt for Bernie Sanders as well as Jill Stein and Gary Johnson. This is something both Sanders and Trump supporters understand all too well.

Namely, that there’s a very powerful and well connected contingent of rabid Hillary Clinton obsessives who would basically do anything, including lie, steal and cheat in order to ensure her place on the iron throne. Sanders supporters saw it crystal clear during the rigged Democratic primary, and everyone else saw it during the general election with the unabashed media bias. We saw it again post-election with the emergence of an endless series of unhinged Russia collaboration accusations and narratives.

Simply put, this subset of crazed Clinton ideologues don’t believe in the will of the people. They decided it was Clinton’s turn and anyone who stood in her way had to be stopped. This is why Clinton cultists showed nearly as much intense hatred for Sanders as they did Trump. These sorts genuinely feel they’re more qualified to decide on who should be president than the average voting pleb, and they predetermined that Hillary was the correct choice. The Strzok-Page texts proved what many of us had already assumed. That such people not only hold positions at the highest levels of our three-letter agencies, but they’d be willing to take action (according to Strzok’s own words) to ensure their desired political outcome is realized.

Moving along, while the above is unquestionably significant, there’s a much larger lesson to be learned. If all you take away from these controversies is a partisan lesson of pro-Trump vs. anti-Trump, you’re missing the bigger picture. Which is that highly secretive and extremely powerful institutions are inherently dangerous to a free society and will attract and promote the most sociopathic individuals amongst us.

One day it could be pro-Clinton people, the next it could be pro-Trump or pro-Sanders types. Unethical humans willing to do whatever it takes to advance their own agendas exist across the political spectrum. As such, if we truly care about freedom and self-government, our goal should be to demand as much transparency in our government organizations as possible in order to reduce the potential for systemic abuses of the American public. In contrast, if such abuses are easy to achieve and continually go unpunished, of course they’ll occur regularly.

The sad truth of the matter is that we as a people have been too propagandized and naive to admit how corrupt and vicious our government has become, irrespective of who resides in the oval office. Our current problems are deeply systemic and therefore cannot be solved by obsessing over the symptoms and switching out a president. We need to face reality before we can recover as a society, and to do this we must admit certain uncomfortable truths.

Most significantly, we need to come to terms with the dangers of allowing extremely secretive and all-powerful agencies to multiply and grow to the extent they have. When well-documented abuses from the NSA, CIA and FBI go on for decades with little to no accountability, what do you think’s going to happen?