The idiocy of the left knows no boundaries.

First it was Red Hen, the restaurant.  Well, ok, that was second, after another staffer was chased out of a restaurant the other day.  Now we have Maxine Waters, a sitting Congresswoman, advocating for this sort of behavior.

Boycotts of this sort are legal, by the way.

Has Maxine thought through how dumb it is on a personal level to egg on this sort of crap, legal or not?

See, Maxine lives in a nice, safe, “blue” area and she has plenty of money.

But everything she consumes comes from or via a hard “red” state or region.

A huge percentage of the truckers are in fact “red state” folks.

Without them Maxine starves.

Without them her “motorcade” of protection has no gasoline to fuel their cars or SUVs.

Without them her plane has no jet fuel.

Without them her toilet does not flush and her lights do not work.

Want to go there Maxine?  Really?

What you’re advocating for here is factual civil war.  Not a shooting civil war (yet anyway; she might impress me yet), but civil war nonetheless.  You’re not just advocating for it you’re cheering on the first pieces of it that are happening right now.

Except the losers, and it won’t be the red state folks, won’t die from bullets.

They’ll freeze, or sweat themselves to death in 90 degree heat with zero A/C since there will be no power.

They’ll die of thirst or wallow in their own **** that they cannot flush.

Well how do you think you’re going to get what you want then?  You see, you can’t exactly force wheat out of the ground, nor corn, nor oil.  You can’t force someone to drive a truck.  Oh sure, you might be able to find some replacement drivers, maybe, if you can find any of your fine blue friends who don’t think it’s beneath them and aren’t stoned and thus can’t pass a drug test.

Maybe you can ask Illegal Jose to drive that truck?  He’ll probably run you over with it as he’s juggling the bong and vodka bottle while attempting to do so!

This isn’t speculative or an apocalyptic novel any more.  It’s here.  We’ve already seen a nutter shoot up a Republican baseball practice — and remember, he specifically asked which party’s reps were on the field before shooting.  That wasn’t random at all.

How many more nutters just like that did Maxine Waters gave marching orders to?

Will those who are targeted shoot back?  If we must, I’m sure we will.  Oh, and we know how to shoot too — most of the nutters don’t.  That’s why they tend not to do so good on their score in what would otherwise be a slaughter.

But no, this is not likely to be a shooting war, at least not initially.  Oh sure, there will be crazies who think that’s the answer to being “triggered” by Sanders walking into a restaurant.  But most of them will instead just tell her to leave and then preen around on social media about how “powerful” they are.

And leave we shall, at which point said restaurant, now bereft of half its customers who are too “deplorable” to be served or who simply won’t patronize any establishment that brings a political litmus test out before the menu, will economically collapse.

Would you care to re-think how powerful you were with your “statement”?  How did it work out for all those servers and cooks that were “disgusted”? 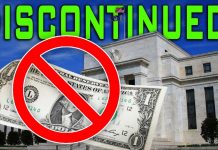 Ep. 1469 Watch the Liberal Meltdown After This Announcement – The Dan Bongino Show