More and more, I hear that folks are feeling frustrated and betrayed, combined with a sense of loss and despair. I feel this way, too.

As I’ve written recently, I observe this is due more than anything else to a widespread demoralization society is suffering from.

Certainly the statistics reflect this. Suicides in the US are up 30% since the turn of the millennium, obesity is at epidemic proportions, mortality rates are rising especially among white working-class Americans, and our national opioid addiction is now the “epidemic of epidemics.”

To these we can also add falling birthrates and the truly startling shift towards a younger age for the onset of depression; declining from age 30 now to age…14(!)

When an organism gives up on self-care, breeding, or its will to live, it’s suffering from a tremendous amount of strain that is cutting it off from its own life force.  A dispirited lion wasting away in a cage has a lot in common with the average American today.

At a deep level, what ails us is not a host of unrelated, intractable problems, but the fact that our model of pursuing eternal economic growth simply isn’t working anymore. It doesn’t work for the planet’s increasingly strained ecosystems, nor does it work for the bottom 99% of folks in society (i.e., the non-elites).

The various health epidemics noted above are merely symptoms of a larger acute spiritual crisis.

But viewed at a certain angle, this may be a good sign.

Why? Because in order to shift from one model to another, the old one first has to become unbearable.

And, as the data cited earlier is making increasingly clear, our addiction to growth is killing us and the ecosystems we depend on.

Look, if you’re a well-nourished human being — physically, emotionally and spiritually — then you have a heartfelt appreciation for the Earth.  You can clearly see that it’s achingly beautiful, perfect, and abundant.  It is your home, your mother, the source of all your sustenance, and the one and only vessel for your children and grandchildren (born or as yet unborn) —  stretching as far into the future as you can imagine.

I’m completely in love with this world and with being alive in it. I love the beauty of Nature and all of its life forms, each beautiful and complete in its own way, just like this dragonfly: 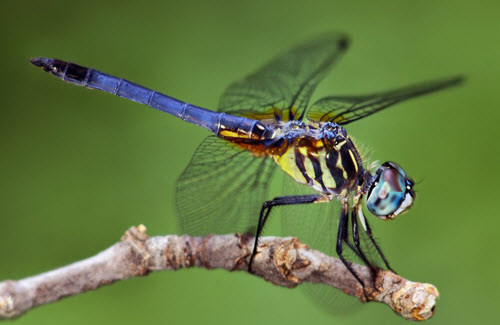 Nature and our connection to it is about creation, flux, and regeneration — it’s deeply spiritual.  To live in a world solely of materialism, devoid of deeper meaning and connection, is be the caged lion wasting away.

The loss of life on this planet, the diminishment of once complex ecosystems into barren, simplistic shadows of their former selves, is a source of very real and profound sadness.  It is my belief that the existential dread many of us feel is our registering this loss of life — consciously or not — as Nature retracts her abundance.

Who hear still hears crickets at night? With the unfolding insect apocalypse, fewer and fewer can make that claim.

The point of all this is that the one and only way out of this box in which we find ourselves is by adopting a better model for living. And to do that, we first need to re-write the narrative that guides us.

If we do this, anything is possible. We can create a future of abundance and prosperity.

But if we don’t, the end will certianly be bitter and full of regret.

Literally every time you read anything about economic growth it’s always, unerringly, framed in positive terms.  This serves to reinforce the idea of growth being “good.”  It’s virtually never questioned or famed differently.

Mr Li’s estimate is higher than the 6.7 per cent growth reported for 2016 but the real recovery has been sharper. Corporate results are rosy, commodity imports are hitting new records and producer prices have shifted back to steady gains, signifying better industrial health.

So why will Thursday’s 2017 GDP figures not reflect the good news?

China’s economic growth was described as “better (than expected)” and in terms of “recovery” and “rosy” and “good news.”  It doesn’t matter which news sources you read, you always find growth framed as “good”, “rosy” and desirable.

But is it truly any of those things?

Using the ‘Rule of 72’ we can divide the reported 6.9% growth into 72 and discover that at that rate of growth, China’s economy will fully double in just 10.4 years.

It’s already the largest economy in the world in terms of oil imports, raw material usage, concrete poured, and food consumed.  But in just 10.4 years it’s going to be twice all of those things.

And then what? Well, another doubling from there of course, all of it rosy, desirable and good. But how many more forests, fisheries, aquifers and fossil fuels will such doubling consume?

Of course, when you read about an economic slowdown you’ll see framing words like “concern” “weakening” and “weighing down.”  This subtle and continuous conditioning has most people firmly committed to the belief that economic growth is something we always want more of.

This is psychological programming, pure and simple. It’s so pervasive that it’s thoroughly accepted without question or examination.

The problem, of course, comes in when that unquestioned narrative of growth begins to foul its own nest. When people’s inner guidance systems begin to crash into each other: one committed to the idea of endless growth, the other observing the damage it does.  Self-preservation runs smack into self-harm.

Perhaps this explains the mass appeal of such movies as Avengers: Infinity War where the evil Thanos is an eight-foot-tall madman seeking to restore balance to a universe of overgrown worlds by killing half the living beings in it. The entire plot plays on these subconscious belief systems I’m describing. I do wonder if that’s, in part, why the movie has been a hugely successful box office smash.

Narrative #2: We Should Live Within Our Means

When I was a child, our family measured the growth of me and my siblings on a door frame in pencil.  I so looked forward to being taller at each new measurement.

But I’m certainly glad I stopped growing by age 18. Otherwise I’d have grown over 9 feet tall, likely dying from a heart attack by age 26.

There’s nothing wrong with growth, in and of itself. But its context matters critically.

There was nothing wrong at all with we humans expanding into our biosphere as it could support our population, as does any and every organism in existence.  The problem was in failing to self-regulate our consumption to a sustainable level.

Heck, it’s worse than that because we didn’t just fail to regulate ourselves; we just ignored the math.

Here are some simple math problems we could have easily seen coming, but chose not to:

Even easier math says that our pension and entitlement promises to ourselves cannot ever be met. What’s realistically being done about any of that?  Nothing as far as I can tell.

What’s the plan for replacing 100% of the concrete ever poured in the world?  Where’s the energy for that going to come from?

Humans have never transitioned from a more- to a less-concentrated energy system before. And at current rates it will take 400 more years to get there.  Where will the energy for that transition come from?