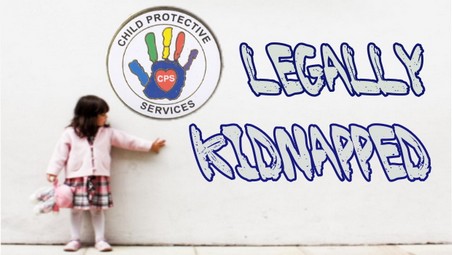 While the media is providing wall-to-wall coverage over families being separated at the border when trying to enter the U.S. illegally, howling in outrage without providing any context over some of the reasons they are being separated (such as a convicted rapist separated from his 5 year old daughter after trying to enter the country illegally again), we have to wonder where that same outrage is over the tens of thousands of American children being “ripped from their parents arms” by states’ child protective services.

According to U.S. Department of Health and Human Services, Administration for Children and Families, Administration on Children, Youth and Families, Children’s Bureau, the data for fiscal year (FY) 2016 shows that 437,465 children are in the U.S. foster care system, with 273,539 having entered the foster care system in during FY 2016, for a variety of reasons, some legitimate, and some not as we will show within this article.

While there is no doubt that some parents are indeed neglectful, some troubling examples of states’ overreach,  highlights how children are being held hostage to states’ decrees.

For example, we see from this March 5, 2018 article at PSMag, that hundreds of children across the country are being taken from their parent, if that parent was a “victim” of domestic abuse, under the label of “neglect.”

In 2012, Amy’s abuser, Terrance, kidnapped their four-year-old son from daycare and broke into Amy’s rental home in Texas, where he assaulted her. Two weeks after the kidnapping, a stranger dropped Amy’s son back off at daycare with a burn on his face. To this day, Amy has no idea who returned her child. Terrance was arrested and later convicted of domestic violence assault, burglary, and violation of a criminal no-contact order. The Texan court hearing the case granted Amy full custody and cut Terrance off any access to his son, which is rare even in situations where domestic violence is present. But for Amy and her son, the terror wasn’t over.

Later that year, Amy and her son moved to Washington state for safety. Both of them were suffering from post-traumatic stress disorder (PTSD), and—partially because Terrance failed to pay any child support—Amy struggled to find affordable health-care coverage. In desperation, Amy reached out to Washington’s Department of Social and Health Services for help. Her son’s severe PTSD, caused by his father, was manifesting in violent outbursts, and Amy knew that he needed trauma-informed treatment. DSHS didn’t provide any support; instead, it took her son away and placed him in foster care for almost 18 months.

Amy’s story is one of hundreds of cases across the country where children are removed from the custody of a parent who has suffered from domestic abuse at the hands of a partner. The logic follows that parents who are moving through the trauma of abuse—whether it’s the abuse itself, or the subsequent recovery—are somehow neglecting their children and failing to protect them from the circumstances of the abuse itself. Despite being victims, parents are further victimized by the systems that are supposed to protect them.

States have been doing this type of thing for years, using the term neglect in order to take control of the children.

Another example of what is considered “neglect” by states, comes from 2013, where parents who moved their son from one hospital to another when not satisfied with the care at the first one, ended up having their five month old child taken from them.

While at Kaiser Permanente, the police showed up at the request of Sutter. The police told the parents that staff at Sutter had told them that the child was in such a bad state that, as Anna put it, “they thought that this baby is dying on our arms.”

After the police saw that baby Sammy was fine and examined medical records that clearly stated that Sammy was clinically safe to go home, they left.

The attending doctor at Kaiser said, “I do not have concern for the safety of the child at home with his parents.”

The next day, police came to Alex and Anna’s home.

Alex met them outside and was slammed against the wall and pushed to the ground.

His keys to the home were forcibly removed from him and the police entered the house to take the baby.

“I’m going to grab your baby, and don’t resist, and don’t fight me ok?” a Sacramento police officer is heard saying in the video.

Those parents were Russian natives, so the story went viral in Russia as well.

While a judge eventually determined the parents should be given back custody of their child, the system also overrode the parents choice of hospitals, had the child sent to a third one, and ordered the parents to “follow all medical advice,” from the states hospital choice, and were ordered to submit to regular home visits by CPS, the group that originally stole their baby.

Parents unhappy with the quality and teaching methods used in the public school system that decide to home school their children are also being targeted. Even after jumping through all the legal hoops necessary and obtain the proper approvals, CPS snatches their child.

Nearly a week after receiving the state’s stamp of approval, Harris received a phone call from Child Protective Services (CPS) enquiring as to the whereabouts of her children, and why they hadn’t shown up to school for nearly two weeks. After explaining the situation to CPS, Harris then offered to provide legal documents for CPS directors to review. “I told them that my kids were homeschooled now and that I could furnish the documents if they need to see them,” said Harris.

CPS seemed satisfied with Harris’ responses to their questions and ended the conversation, leaving Harris to think that everything was resolved favorably.

Nearly a month went by without incident. Then, on January 13, 2017, a large group of CPS case workers and police officers descended on Harris’ home, informing her that they had a court order to remove her children from her custody due to “educational neglect.”

At this point, Harris demanded they produce warrants or other legal documents justifying such severe action. The police and the CPS agents refused that request and Harris accordingly refused to hand over her children.

In response, the police officers arrested Harris, impounded her car, and forcibly removed her children from her home.

More than a month has passed since Harris has been allowed to see her children and neither CPS nor the police department has provided adequate legal justification for seizing her children and placing them in the foster care system.

Apparently the mother had made social media comments critical of the public school system, and shortly after she found herself targeted by CPS.

To understand how widespread this problem is, of parents being targeted by CPS for deciding to homeschool their children, just one homeschool organization, the Texas Homeschool Coalition Association (THSC), received 84 calls from homeschool families facing CPS problems in a one year period. In June 2017, THSC successfully petitioned their state Senate to pass SB 999, which offered parents some much-needed relief and protections against CPS, which included that “Courts are now required to find actual risk of harm to a child in non-emergency circumstances before ordering the child removed from the home.”

That is just one organization or coalition in one state, so imagine how prevelant the problem of CPS targeting parents who home school across the country.

CPS workers also target Christians, as highlighted by Investigative Reporter Brenda Scott in her book titled “Out of Control: Who’s Watching Our Child Protection Agencies?,” where she highlights “Christians are known to believe in corporal punishment, which is tantamount to abuse in ‘child-saver’ circles. Christians are also seen as rigid and intolerant, unfit to rear children for the New World Order. Homosexual case workers, aware of Christian teachings regarding their lifestyle, are often hostile to parents who display their faith. The New York State Council of Family and Child Caring Agencies (CFCCA) warns that parents who…display an “over involvement in religion” are suspect”.

She also highlights “Every year, it is estimated that over 1 million people are falsely accused of child abuse or child neglect in this country.”

The book description says it all: “This book of her stories is true. The deplorable and unauthorized might of Child Protective Services is capable of reaching into and destroying any home in America. No matter how innocent and happy your family may be, you are one accusation away from disaster.”

NO ONE MONITORS CPS

It is not just homeschoolers, Christians or other religious groups, but those against vaccinations are being targeted for “medical neglect,” meaning that basically if a parent doesn’t agree with a state’s policies, they can simply use CPS to target the family and take their children.

It is all about control, toe the line or we take your child. By targeting Christians and other religious groups, the states are using CPS to “fracture traditional and biblically minded families,” as was pointed out to me in an email earlier.

The question asked in Scott’s book is right on point, because frankly the answer is that no one monitors them, and they are immune to prosecution for destroying families unfairly.