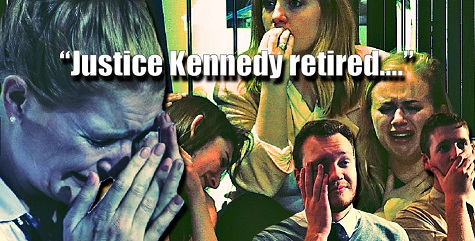 With each consecutive ruling, liberals across the Internet, in forums, chats, on their websites, and on social media have railed against the Supreme Court, called for it to be abolished as an institution, and have gone utterly rabid against Neil Gorsuch, the Trump nominee that replaced the late Justice Scalia.

There has been rampant speculation over the last year that perhaps Justice Anthony Kennedy, a Reagan appointee, and generally known as a swing vote, was planning to retire, which would offer president Trump the opportunity to nominate another conservative, constitutionalist to the Supreme Court.

It has now been confirmed that Justice Kennedy has decided to retire from the court. 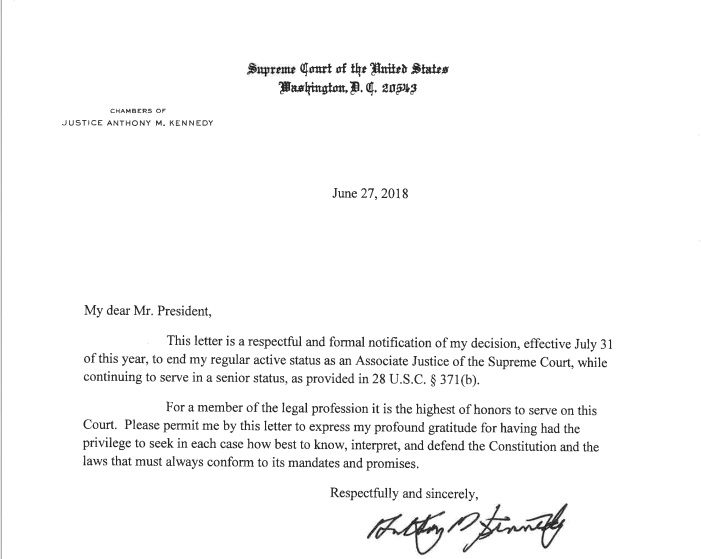 Within minutes of the news hitting the wires, Twitter and other social media platforms erupted with reactions to the news, and multiple hashtags started trending, with liberals demanding that Senate Majority leader Mitch McConnell not hold confirmation hearings until after the midterm elections, trying to equate it with the Senate’s refusal during a presidential election cycle to confirm Barack Obama’s nominee. Those same people suggesting that also neglect to remind people that Obama’s nominee, Justice Kagan, was confirmed in August 2010 during a midterm year.

McConnell’s response is given on the Senate floor, shown below, where he states “The Senate stands ready to fulfill it’s constitutionalrole, by offering advice and consent, on President Trump’s nominee to fill this vacancy. We will vote to confirm Justice Kennedy’s successor this fall.”

Now we see liberal writers pushing narratives to their audience, like what we see about Kennedy’s retirement from Think Progress’so-called “Justice Editor,” where he is already attempting to incite his readers, with statements like “Roe v. Wade will soon be a memory. Anti-discrimination laws will become shriveled husks. The LGBTQ rights revolution will halt and, most likely, begin to march in reverse.”

The Washington Post isn’t much better by headlining a piece titled “Justice Kennedy’s retirement leaves the future of U.S. constitutional law entirely up for grabs.” Another Washington Post headline states “The Supreme Court will now fall to chaos.”

Raw Story predictably throws gasoline on the fire with “‘Abortion will be illegal in 20 states in 18 months’: Jeffrey Toobin issues haunting prediction.”

Those are just a small sample from the liberal media, but what is being seen on social media, just hours after the news broke about Kennedy’s retirement, doesn’t bode well for a country where conservatives are already being accosted and verbally attacked on a daily basis.

Rolling Stone and Esquire writer Andrew Cohen informs his followers “For starters, abortion rights are more imperiled now than at any time since Roe v. Wade. And there is no reason to think there won’t be a rollback of gay rights, either, with Kennedy gone.”

Atlantic, Daily Beast and Rolling Stone writer Thor Benson claims “As a member of the LGBTQ community, Justice Kennedy being replaced threatens my rights. It also threatens the rights of minorities, women and Muslims. Trump must not be allowed to replace him before November. Let the people speak first.”

On and on it goes. In turn, regular liberal users, those that consider themselves part of the #resistance, are indeed being incited by the over-the-top rhetoric on the left from writers and blue-checked verified liberal accounts on Twitter, with one declaring “Only if we, #TheResistance, take this fight to the streets.  We allowed McConnell to steal Obama’s nominee.  We must now fight against the Supreme Court takeover,” with others literally wishing Kennedy had been shot (although he deleted it later, Twitchy saved it.)

Another user, Molly Knight, with 93K followers is also pushing the riot angle, stating “How very cool of Justice Kennedy to pour kerosene on the current dumpster fire that is America. The Roe v Wade riots should provide fine entertainment for him in his retirement.”

Another user, Elaine Atwell, pushes for “revolution,” stating “we may have just left the point at which we could rely on democratic norms to fix our government, and are now on the road to literal revolution!”

See more liberal meltdowns over the Kennedy retirement at The Daily Caller and Twitchy.

Other reactions range from posting nothing but the word “f*ck” over and over again (over 20 times,) with some claiming they were crying in the shower, along with the periodical death threats, encouragement to “fight,” and those asserting there are only two optionsleft, “get fitted for your Nazi uniform or report directly to your death camp.”