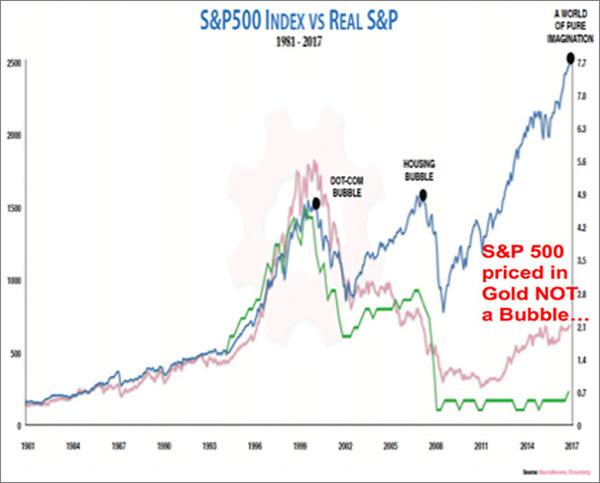 Two months ago, we hosted a conference featuring 25 world-famous asset managers, investment experts, and economists who discussed their economic outlook and predictions.

As you can imagine, these speakers usually don’t talk much about gold. They’re more concerned with stocks, funds, bonds, and the like.

But this year was different.

I’ve never seen so many high-profile investors mention gold as a safety net—and that includes some who were previously hard-core gold bears.

Unfortunately, the reason is not a happy one. All these “in the know” people are very worried about the direction the markets are taking.

This article is a short report that details what five of these well-known asset managers see coming down the pike over the next few years—and why gold is the best hedge against the looming crisis.

MARK YUSKO: Your Purchasing Power Is Being Destroyed

At the conference, Mark Yusko, CIO and CEO of Morgan Creek Capital Management, gave an emotional speech comparing the Fed to a dictator that robs the nation.

He pointed out that despite $20 trillion being injected into the US economy through quantitative easing since 2008, the results haven’t matched the effort…

This increased money supply, he said, resulted in currency devaluation. “This is what dictators do. They systematically acquire the assets, and then they devalue the currency and boost the price of assets.”

He showed a chart that plots the S&P 500 price in nominal terms (blue line) and in gold (pink line).

Put simply, he said, record-high valuations in equity markets are the result of a devalued currency and monetary measures that the Fed pursues: “The purchasing power of the currency is being destroyed right before your eyes, and you’re just not paying attention.”

JEFF GUNDLACH: Gold Will Break Out in a Big Way

Jeff Gundlach, CEO of Doubleline Capital, provided a more technical forecast for gold. Given the situation in the markets, he thinks it’s only a matter of time before the gold price breaks out:

We’re at a juncture in gold, not surprisingly, because it is negatively correlated with the dollar… Now we see a massive base building in gold. Massive. It’s a four-year, five-year base in gold. If we break above this resistance line, one can expect gold to go up by, like, a thousand dollars.

Gundlach was reluctant to predict the probability and timing of this massive gold rally, but he thinks that investing in gold at this price is a no-brainer: “It’s a great time to be buying gold… because one way or the other, this baby’s got to break in a big way.”