Still dreaming in la-la-land.
High-grade corporate bonds are “gradually” – the key word in everything the Fed says – and reluctantly coming to grips with the new era: Yields are rising and bond prices are falling. The Fed has been laboring to accomplish that. With high-grade debt, the Fed’s plan is working “gradually.” But investors in the riskiest corporate junk debt are totally blowing off the Fed. They’re floating around in their own dream world, facing a very rude awakening.

In terms of high-grade corporate bonds, the sell-off has been significant, even if it’s just the beginning. The S&P index for AA-rated bonds is down 2.7% so far this year. As prices have declined, yields have surged, with the average AA yield now at 3.51%, up from around 2.2% in mid to late-2016 (data via ICE BofAML US AA Effective Yield Index): 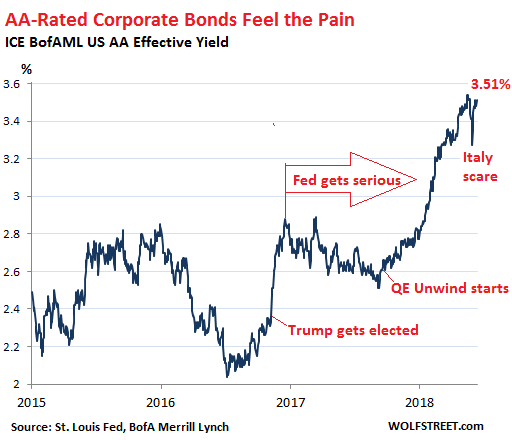 These are the types of bonds that Apple and other large companies hold in their “cash or cash equivalent” accounts that are registered overseas, and that are now being “repatriated” and sold, and the proceeds from the sales are now being plowed into mega-share buyback programs. These corporations, once avid buyers of this high-grade corporate debt, have turned into sellers.

Note some key events marked in the chart above:

In November 2016, following the elections, yields spiked.
In December 2016, the Fed got serious, hiked rates for the second time in this cycle, and assumed an increasingly hawkish tone. But the market for AA-rated bonds blew it off for a while, and yields fell again.
In September 2017, the Fed announced details of its QE unwind and would commence on October 1. The high-grade bond market got serious, and yields started rising again.
In late May 2018, Italian politicians rattled bondholders with threats to wreak havoc in the Eurozone. This caused investors to flee from Italian bonds to safer grounds, such as US corporate and Treasury debt, and for a few moments, prices jumped and yields fell. But that scare is over.

But at the riskiest end of the corporate bond spectrum, with bonds rated CCC or below (deep junk), the party that started at the end of the oil bust in February 2016 simply continued. The S&P bond index for CCC-rated bonds has risen 4.5% so far this year (compared to a 2.7% decline for AA-rated index). Since February 2016, when Wall Street decided to plow new money into junk-rated energy companies, the CCC-rated index has skyrocketed 82%.