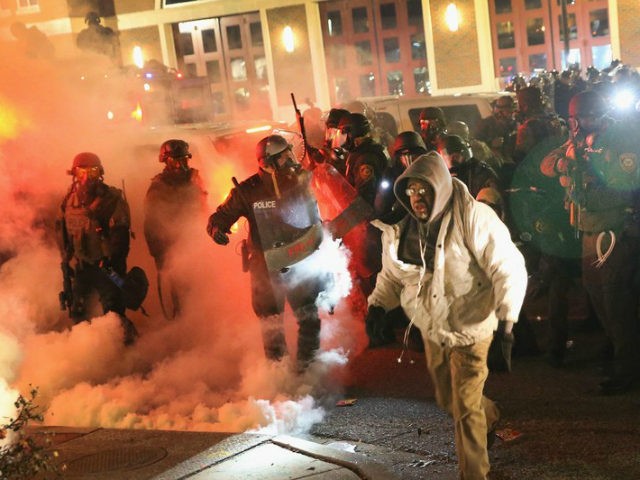 With nothing less than the fate of the Supreme Court at stake, America’s far-left radicals and their enablers in the establishment media are about to turn bullying, intimidation, menacing, and outright violence up to 11.
As we have meticulously documented, Jeff Zucker’s CNN has spent the last five years inspiring, normalizing, encouraging, and outright calling for political violence.

Zucker and his CNN puppets (most especially Chris Cuomo and Jake Tapper) see mob justice as a legitimate political tool, a way to boost Democrat turnout, to blame their own chaos on Trump, and to terrorize their targets, including innocent police officers. And if this media-inspired violence can intimidate a few weak-kneed Republicans into voting against Trump’s upcoming Supreme Court pick, all the better.

Unfortunately for law-abiding Americans on the right and left, CNN is no longer alone. As we have witnessed during the past weeks, the rest of the establishment media have now joined CNN in its unholy crusade to justify and inspire left-wing hate mobs.

The entire media, all of it, just spent two weeks manufacturing an intentionally volatile narrative that was nothing less than a hoax. President Trump’s humane policy of separating illegal alien adults from children is the same policy Barack Obama practiced for eight years. But to inflame hate against Trump and his supporters, the establishment media pretended a cruel president had invented this policy.

We witnessed NBC News stars not only comparing Trump to Nazis, but everyday Trump supporters to Nazis; we watched as the media tried to fool people into believing Trump is caging small children; we saw Time magazine publish a fake cover; we have heard words like “Holocaust,” “internment,” and other hyperbolic lies hurled into a country where left wingers have already tried to murder a group of Republican lawmakers playing baseball.

No rational person can interpret the media’s behavior during the past two weeks as anything other than a call for mob action.

And the media got what they wanted: most of it was aimed at women.

A burnt animal carcass was left on the porch of a DHS staffer, Congresswoman Maxine Waters (D-CA) is publicly whipping up mobs to “push” Trump officials out of public spaces, and death threats against Republicans are on the rise.

And the media are not only responsible for ginning up this climate of hate; the media are openly condoning, encouraging, downplaying, and justifying it.

Here is what is truly scary: this is the level of thuggery we are seeing over a hoax, a lie, a fabricated narrative involving a child separation policy that is two decades old.

The stakes involving the Supreme Court, however, are not a hoax.

When CNN’s Jeffrey Toobin (who has very personal reasons to keep abortion legal) says the legalization of abortion is on the line, that is not hyperbole.

When cable news anchors, on the verge of nervous collapse, say the court will be dominated by conservatives (meaning those who don’t rewrite the Constitution), that is not hyperbole.

Think about it: if the media are willing to inspire and justify mob justice over a hoax, how far will they go when faced with losing the Supreme Court for two decades?

Already the media rhetoric is amped. MSNBC’s Chris Matthews is using the term “civil war” approvingly and openly calling for “vengeance“; the disgraced Dan Rather is leading the charge hurling words like “coup“; CNN favorite Michael Avenatti is calling on the mob to “fight like hell” with the hashtag #WhateverItTakes; a Comedy Central writer openly wished for Anthony Kennedy’s assassination…

And this is just the warm-up.