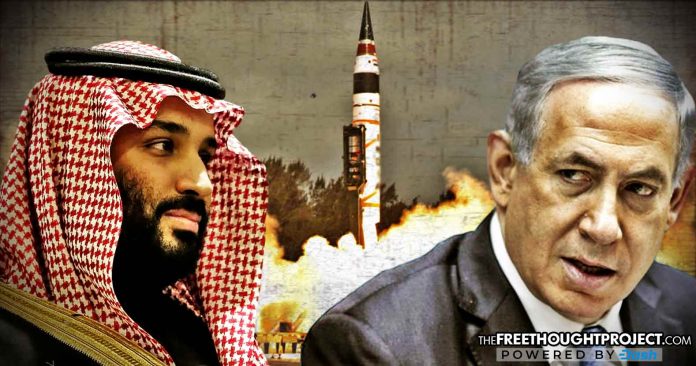 A senior Israeli official at iHLS has come forward with information showing how the government of Israel is aiding the terrorist state of Saudi Arabia in the construction of nuclear weapons.

Riyadh, Saudi Arabia – The Saudi Arabian government has been covertly receiving information on the creation of nuclear weapons from the government of Israel according to Ami Dor-on, a senior Israeli official at iHLS (Israel’s Homeland Security).

iHLS bills itself as the “leading hub for the homeland security ecosystem globally and in Israel” — and is partially funded by U.S. weapons manufacturer Raytheon, according to a report by MintPress News.

Israel is not a declared nuclear power, yet, is believed to possess hundreds of nuclear weapons. The Israeli government has steadfastly refused to become a signatory to the Nuclear Non-Proliferation Treaty.

In a report by MintPress News, Whitney Webb explained:

Israel has been a nuclear power for decades, though its nuclear arsenal is undeclared and the country has refused to sign. Estimates of its arsenal vary, with most suggesting that Israel possesses from 100 to 200 nuclear weapons. Israel was aided in the development of its nuclear program by Western powers, particularly France. Much of the Western “help” Israel received, however, was the result of covert thefts of nuclear material from countries such as the United States and Belgium.

Dor-on says he went public with the information out of fears of a nuclear arms race beginning to develop in the Middle East, highlighting “growing Saudi-Israeli relations,” and noting that Israel recently called the Saudi crown prince “a partner of Israel.”

In an interview with news outlet Arabi21, Dor-on, while not specifying the information being shared, said the sharing of nuclear information with Saudi Arabia was likely only the start of Israel “taking the initiative to develop Saudi Arabia’s effort to acquire nuclear weapons”.

While the purported impetus for the Saudis to develop a nuclear weapon is concerns over an Iranian nuclear capability, the Iranians – unlike the Israelis – have not developed a single nuclear warhead. Furthermore, the conditions set forth under the Joint Comprehensive Plan of Action (JPCOA), which the Trump administration recently withdrew from, but that Iran has said they will continue to adhere to as long as the other signatories abide by the agreement, create conditions under which Iran will almost certainly not be able to develop a nuclear capability.

Saudi Arabia is now becoming open in their desire to develop nuclear weapons, the writer noted. “This information should shock us,” Dor-on said, “as we see the world is changing for the worse, following the race for the possession of nuclear weapons that pass right over our heads in the Middle East.”

The security expert noted that the impetus for Israel’s decision to begin sharing nuclear technology with the Kingdom of Saudi Arabia was a recent offer by the Pakistanis to give the Gulf kingdom nuclear-weapons expertise to the “within a month”. Dor-on added that the Israeli government felt it couldn’t “leave it [the development of a Saudi nuclear program] solely to Pakistan”. The Saudis are suspected of being behind the financing of the Pakistani nuclear program, thus the offer was likely related to this relationship.

“They will go to Pakistan, and take whatever they want,” said General Amos Yadlin, former chief of Israel’s Military Intelligence Directorate.